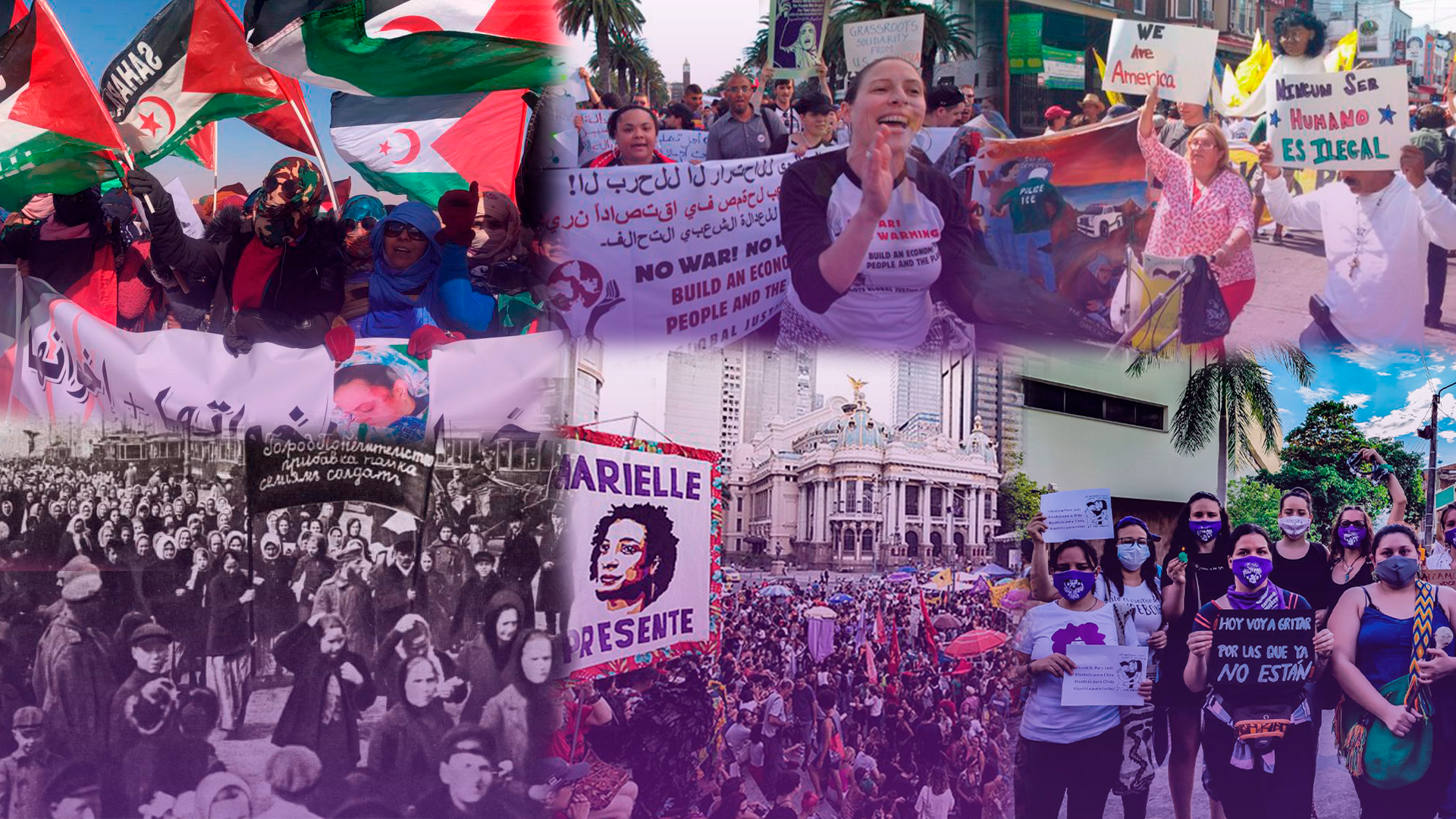 April 24: Feminist Solidarity Against War and the Power of Transnational Corporations

Who profits from war? What companies and countries benefit from this industry? What does war mean to women’s lives? How can we face wars, military conflicts, sanctions, and imperialism that manifests in the everyday lives and on the territories of peoples in several parts of the world? What are the relationships between militarism, racism, patriarchy, and capitalism? And how can we build anti-systemic and feminist peace?

These are some of the questions that have guided the actions and reflections of the World March of Women in the struggle for peace and demilitarization. Opposing wars is a longstanding topic on the agenda throughout the history of women’s struggles. During World War I, in February 1917, the demand for “bread and peace” mobilized women and prompted the Russian Revolution. The struggles for liberation in the African continent waged resistance against the military violence of colonialism. To this day, the struggle against war is a pressing matter, and not just when it involves European countries: war is a reality for many territories in the Global South, as it is a brutal tool used to expand and strengthen the capitalism system.

A Day of Action

April 24th is a date marked on the calendar of the World March of Women (WMW) as International Day of Feminist Solidarity Against the Power of Transnational Corporations. The date honors the more than one thousand victims of the collapse of the Rana Plaza building in Bangladesh in 2013. Rana Plaza was a complex of sweatshops that employed mostly women under slave-like conditions. Since the collapse of the building, the victims’ families fight for justice and organizations denounce the impunity enjoyed by transnational corporations such as Walmart, Gap, and Zara, which exported and sold clothes manufactured at the Rana Plaza. It was not an isolated incident, as sisters from Morocco and the Philippines denounce on this video.

Transnational corporations are the ones garnering the most power and wealth from the conflict of capital against life. The offensive of corporate power advances toward women’s labor, territories, and bodies, using militarization as its tool. For this reason, in 2022, the World March of Women decided to focus its action against the power of transnational corporations on the anti-war agenda. Around the world, feminists will organize on the streets and social media to denounce the arms industry, borders, free trade agreements, sanctions, and blockades that threaten “food sovereignty, health, and education; driving the exploitation of common goods and the climate crisis through transnational corporations; promoting drug and people trafficking, racism and xenophobia; and politically and economically destabilizing everywhere it goes,” as the WMW declaration reads.

Since its launch, Capire has addressed these topics and aimed to understand them from the perspective of the experiences of women who live and struggle on territories under conflict.

We have published articles by feminist militants from Cuba and Venezuela about the impacts of the unconventional warfare and economic blockades imposed by the United States against the two countries. We have interviewed sisters from Western Sahara about their anti-colonial struggles against the Moroccan occupation of their territory and the criminalization of militants such as Sultana Khaya. The criminalization of women fighters is also a reality in countries such as Palestine, the Philippines, Myanmar, Colombia, Honduras, and many others. As the peasant leader Nury Martínez said, “Colombia is fully militarized. The military power plays a key role in Latin America as a whole, but Colombia is especially strategic for the United States to intervene in Venezuela and other countries.”

On the other hand, grassroots feminism has proved to be a tool for change and resistance. The Palestinian militant Ruba Odeh told us in an interview that “we are making the feminist struggle a primary source for the peoples’ struggles for liberation.” And Khitam Saafin, who is being held in prison by Israeli troops since 2020, wrote: “We, Palestinian women, can face anything. We are stronger and we are all united against racism and colonialism.” When we talk about demilitarization, we are talking about freedom for Khitam and all political prisoners!

Land-related conflicts and militarism go hand in hand. In Mozambique, for example, women’s self-organization is a defense strategy against the systematic violation of their bodies and the encroachment of their lands. “In the Cabo Delgado Province, for example, the Mozambique government is known to have signed land exploration and concession agreements with transnational companies. Because of that, a lot of the local population had to flee their own land, dodging bullets, being separated from the place where they belong,” told us the militant Nzira Deus.

By seeking refuge in other parts of the world, people who are forced out of their territories due to war face militarization in the form of fences, walls, and borders, as well as discrimination. “No human being is illegal,” migrant militants say.

With women in movement, we have learned that the conflict is not only happening when it is on TV—quite the opposite, the developments of war and its continuing impacts rarely make the news on big Western media. Or they are quickly out of the headlines, as we have seen happen with Afghanistan after two decades of US military occupation. Meanwhile, the attacks of the Taliban against women’s lives continue, and so does their resistance, even though it has been silenced.

The Russia-Ukraine war causes concern and makes it a pressing matter to critically challenge the responsibility of NATO (North Atlantic Treaty Organization) in the escalation of the conflicts. The economic and military control of the United States over other territories is a reality because this is how it secures imperialist power. Imperialism is, unfortunately, not a thing of the past—yet. Around the world, women are joining efforts to build anti-imperialist feminism, as shown in the poster gallery Anti-Imperialist Feminism To Change the World.

The pacifist activist Kate Hudson granted us an interview and addressed the dangers of the nuclear threat amid this war, arguing that, “We don’t want more and more weapons and troops in there. We want a peaceful negotiation, a settlement agreement on common security for the region, so everyone can live in peace. Otherwise this can escalate to nuclear war. In such a war, it is the common people that suffer, women and children, the poor.”

The solution is not about “increasing representation” within NATO, but rather about dismantling it. “Woman pushing the nuclear button is not feminism,” said the women involved in the building of the Peace Summit “No to NATO,” which will take place in June.

The perpetual war against Black people devastates countries which, in theory, live times of peace. “We need to fight for the demilitarization of life and bodies, putting the right to territory as the center of the debate. Only then we can talk about truly radical changes and social transformation,” said Dara Sant’Anna as she reflected on the militarization of slums in Brazil.

There is continuity between military occupations and interventions in the countries and the advancement of transnational corporations over territories. Haiti’s case is exemplary: decades of a United Nations (UN) mission have been followed by coups and authoritarian political projects supported by the United States, as denounced by Islanda Mircheline.

We share all these points of views and experiences because we understand that building a society free from violence, war, profit, and militarization is a feminist task—a task taken upon by women who sustain life, despite all, in their communities and where they work and organize. And when we lack words, we can read, watch, and listen to the production of women who bring together art and politics using different languages. Al Khadra, Hanaa Malallah, Salka Embarek, Sofía Monsalve, Kishwar Naheed, and so many others explain the unexplainable, say the unsayable, help us go through conflicts and defend peace and the sovereignty of the peoples.