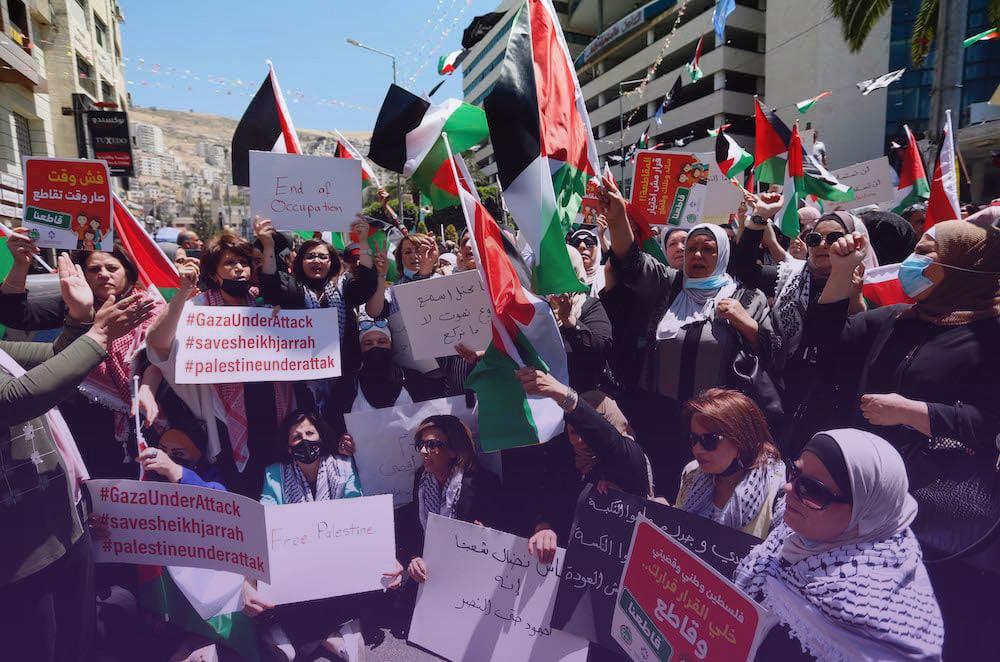 Solidarity To Build A Free Palestine

Throughout the month of May, women and peoples around the world mobilized in solidarity with the Palestinian people. Israel’s attacks on Palestine, in Sheikh Jarrah, Jerusalem, and the Gaza Strip, resulted in 242 deaths and the expulsion of 74 thousand people from their homes. When it comes to this conflict, speaking of solidarity becomes a project for an equal future and a political action of resistance and change.

The struggle against Israeli occupation on Palestine is not only for the Palestinians, but for all the peoples of the world fighting for self-determination. Apartheid systems threaten peoples they directly affect or oppress and all humanity. Such occupation is a creation of international powers to serve the interests of the imperialist project which aims for the submission of the peoples from the global South and the usurpation of our common goods, based on violence against cultures, sovereignty and different ways of living.

This became even more evident with the support from governments such as the USA, Brazil and Uruguay to Israeli attacks against palestinians. Inside those countries, though, social movements demonstrated their internacionalist solidarity to free Palestine.

For Souad Mahmoud, of the World March of Women Tunisie, we must highlight that Palestinien struggles are an important part of the anti-imperialist resistance around the world:

The Palestinian struggle for their land has been repeatedly hidden behind discourses about a “mutual conflict”, which invisibilizes the grassroots power and also the unfair imbalance between these fights and Israel’s army forces. But while corporate media hides this reality, the grassroots movements and medias  create tools and organization to write and show information straight from the source.

Zahra Awaly, from the World March of Women Lebanon, arguments that a better way for the  media to deal with all the news from this crisis is by using the concept of linguistic resistance. Using keywords for a more accurate description of the real situation can change public opinion about this matter. She says:

The deporting of more than five hundred Palestinians from their home in Sheikh Jarrah, Jerusalem, didn’t pass unnoticed despite the corporate media trying to block it out. Palestinians are denouncing the killing, arresting, deporting, the bombing and ethnic cleansing.

Organizations around the world joined forces and suport of the Boycott, Divestment and Sanctions (BDS) campaign, an economic, academic and cultural boycott on Israeli and other international companies that have any type of connection with Israel’s crimes and apartheid. International social movements such as La Vía Campesina and the World March of Women are deeply committed with the struggle for free Palestine. They are making international pressure and denounce and are participating in several marches during the days of attack in different territories, as Quebec, Brazil, Morocco and Tunis.

Internationally, people demonstrated solidarity and raised awareness about the cause in any way possible. The Moroccan Front in Support of Palestine and Against Normalization organized sit-in meetings and rallies in more than 50 cities on May 16 and in 40 cities on May 23. For Khadija RyadI, Moroccan activists have always considered the Palestinian women’s struggle as a model, and as an example to follow because of their braveness.

Popular reaction around the world has placed solidarity and international awareness on another level. Over the years, pro-Palestinian movements have made visibility actions to pushed governments and other institutions to position themselves and take political and economic attitudes in defense of human rights and self-determination.

In Ireland, people pushed their government to recognize Palestine and to acknowledge and condemn the annexation of Palestinian lands by Israel, refuting their war crimes. It was the first European country to do so. Belgium followed it. It’s 73 years after Nakba, the “catastrophe”, as the Palestinians call the events that followed the founding of Israel, which meant the forced expulsion of more than 700,000 Palestinians from their land in 1948. This history of violence is supported by the connivance of governments, the UN and institutional organizations.

Even after the cease-fire, established on May 20, Sheikh Jarrah and other areas are still threatened and people reclaim their homes back. The violence remains with arresting and extensive deporting in Silwan, all away from the media and public opinion. The struggle for free Palestine is also the struggle for the liberation of all political prisoners, such as Khalida Jarrar and Khitam Saafin, the president of the Union of Palestinian Women Committees, that had suffered an arbitrary four months extend of her political imprisonment.

And Dalia Nassar asked people to remain in resistance:

¹ The word “intifada” means, in Arabic, suddenly awakening. The First Intifada was a Palestinian uprising against Israeli occupation began in December 1987 in the Gaza Strip.