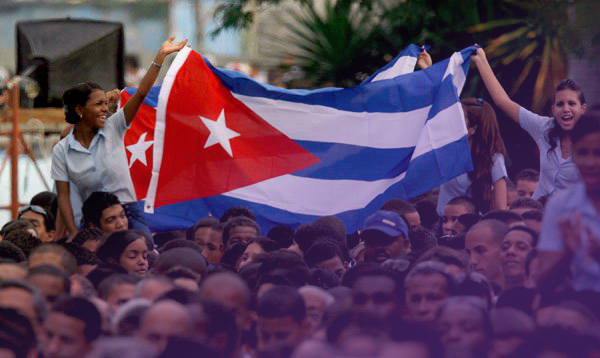 We make our revolutionary, vanguard denunciation toward a process of change and to break free from the rule of imperialism.

First and foremost, anti-imperialism means taking up a stance that globalises international solidarity, unity, respect for difference, the non-interference in internal affairs, equality of rights and opportunities, equity, and social justice.

Imperialism is responsible for making the rich increasingly richer, while millions of people around the globe remain unable to access safe drinking water and food.

To reaffirm an anti-imperialist position, we must be anti-colonialist and champion the peoples’ right to free determination and independence. We need to analyze the anti-imperialist struggle from the perspective of the damage it causes to the ecology, to illiteracy, malnutrition, and the struggle against privatizations and neoliberal policies. All these conditions and shocks are inflicted by States against the people of each country, and by the international financial organizations against the peoples.

Anti-Imperialism Is a Feminist Struggle

We understand that all these struggles come down to one: against capitalism, colonialism, imperialism, and patriarchy. This is why building upon the struggle for socialism is the most appropriate way to reach equality and social justice. We have to face all measures that intend to curtail the freedom of human beings and all discriminatory and xenophobic practices.

Being anti-imperialist is about condemning the implementation of military and naval bases against the will of the peoples. War and warlike conflicts destroy families, damage the environment, and exterminate entire nations.

Today, more than ever, we must fight for the proclamation of Latin America and the Caribbean as a peace zone. This means engaging in a necessary dispute against the imperialist attack to protect life and consolidate peace. Not only that, we also need to raise awareness among political parties, social and people’s movements, and other class struggle platforms about how vital it is to take women’s struggles upon themselves to build truly fair, participatory, emancipatory processes.

Every conflict in this region and around the world is chiefly felt by women. In this sense, demands for gender equality and the struggle against patriarchy must be part of our agenda as a movement, but they also must be part of the agendas of governments. Through women’s perspective, we want to create spaces of encounter between anti-imperialist women, establishing our own forms of communication.

First and foremost, anti-imperialism means taking up a stance that globalizes international solidarity, unity, respect for difference, the non-interference in internal affairs, equality of rights and opportunities, equity, and social justice. We must take direct actions that lead to true democratic, anti-racist, anti-patriarchal social change.

Cuba, a Star of Resistance and Solidarity

On this globalization of international solidarity lies Cuba: an anti-imperialist people who, despite hardships, will stand up for this principle even if it takes their own blood. It is a philosophy of life and resistance that remains unbroken as they defend their national sovereignty.

Nevertheless, the United States government imposes economic sanctions that affect countries that do not agree with its policies. The United States’ imperialist policy against Cuba is characterized by blockades, which have strengthened sanctions against citizens, institutions, and companies from other countries that want to establish economic, commercial, and financial relationships with Cuba.

The Helms-Burton Act, imposed in 1996, violates rules and principles of international law, such as the free determination of peoples, sovereign equality, and non-interference in internal affairs of the States. Moreover, it violates the principle of peaceful coexistence between nations.

Cubans remember. We understand that this criminal, unfair policy corresponds to the major pervasive hardships in the country, which hinder its advancement and development. Therefore, the precept of the Cuban people is resistance and union, centering around the party and the revolution.

We live a dignified revolutionary history, facing the advances of the empire’s power and terrorist attacks that have cost the lives of innocent people for more than 60 years.

For years, we have demanded that Cuba is given back the territory illegally occupied by the Guantánamo Naval Base. So far, all United States administrations have neglected our demands and denunciations.

We have a revolutionary heritage. Women, youth, and all the people have resisted despite hindrances, slandering, threats, and terrorist attacks. We will continue to build our socialist project with the purpose of building an increasingly more thriving, fairer nation, with an unshakeable conviction to keep the flags of equality and solidarity among peoples flying high.

The genocidal economic, financial, and commercial blockades maintained by the United States government against Cuba aim to destroy the Cuban Revolution and impose a regime that is not in accord with our interests, which constitutes a grave threat to the human rights and fundamental freedoms of Cubans.

The Blockade Is a Threat To Lives

The blockade produces severe restrictions to food imports—food that should be going to families, schools, hospitals, childcare centers, and retirement homes. Cuban women see the blockade as the worst form of violence perpetrated against women and the entire people. Satisfying food needs is a constant source of continuing tension for families, especially women, who always bear the primary responsibility for home care.

Economic coercion measures also affect the access to the necessary resources to care for the sick and those who need treatment of any kind. This aggressive policy impacts fuel supplies in our country, as it imposes sanctions and threats businesses and transportation companies that are based in other countries and want to trade with Cuba.

As if all these things were not enough, the United States government and its allies spearhead an infamous, slanderous campaign against Cuba’s international cooperation in which it provides healthcare to countries that need to import healthcare services—and need it even more in times of pandemic.

Cuba and Cuban women (who are the majority of healthcare workers in the country) provide these kinds of support actions in the name of international solidarity. Their presence was imprinted in Honduras, Angola, and other nations that trust our healthcare professionals, because, as the historical leader of the revolution Fidel Castro used to say, “Cuba shares what it has, not just what it has to spare.”

Friends from across the world, you can count on Cuban women. We will always be willing to offer our efforts and our unwavering support to the fair causes of the peoples.

This article is an edited version of the speech delivered by comrade Elpidia Moreno, of the Cuban chapter of the World March of Women and the Federation of Cuban Women, during the online seminar Anti-Imperialist Feminist Struggles Against Militarization, War, and Sanctions held during the International Week of Anti-Imperialist Struggle, which took place in October 5–10.