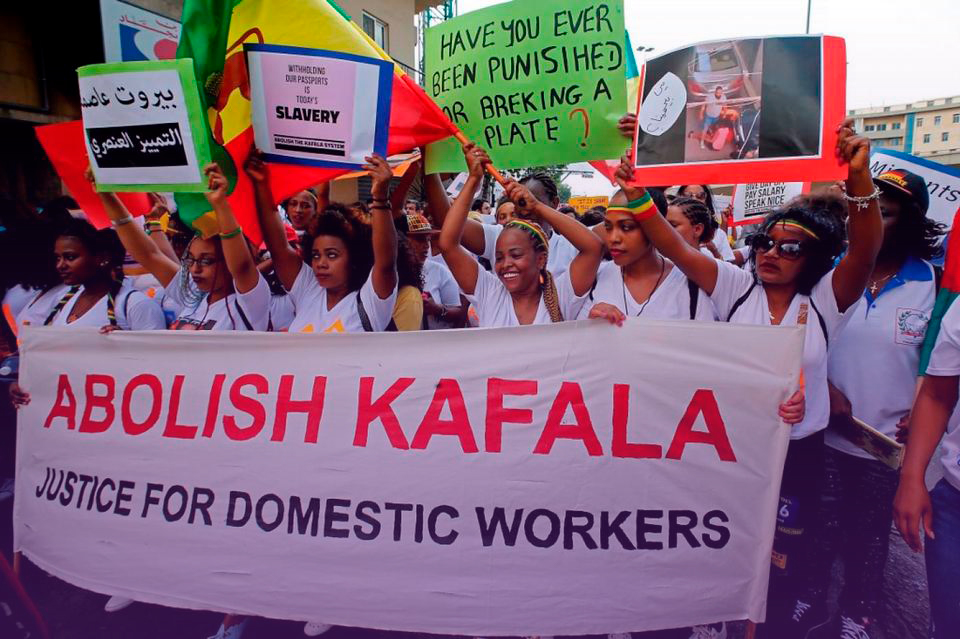 Women, Displacement, and Refugees in Lebanon

Read and listen to the contribution of Yafa El Masri, a Palestinian refugee in Lebanon, on the webinar “Migrations and Refuge on the Feminist Agenda."

We look forward to building action and sisterhood among women all around the world, and it is very important that our feminist agendas are established from the knowledge of the actual situation. Europe’s refugee crisis has taken over the attention of the world. One percent of the entire world today, around 80 million people, are forcefully displaced from their lands. As Europe is in the center of this crisis, it’s really important to remember that actually 85% of the countries that are hosting refugees are not in the North of the globe.

We live in a world where we face “modern” problems, for which no modern solutions exist. Therefore, it has become more urgent than ever to introduce the feminist theory in international relations to the agendas of migration and refugee around the world. As opposed to the current realist approach which is focusing on maintaining state power, feminist theory can diminish discrimination and human suffering by rather focusing on domestic policies and the experiences of the individual. However, we remain aware that any feminist agenda towards today’s refugee and migration problems can only be established through concrete knowledge and a thorough analysis of the current situation on the ground. Hoping for the establishment of feminist agendas towards the situation of forcefully displaced groups in Lebanon, we are writing this as a resource for identifying and interpreting the refugee and migrant situation in the country today.

According to the UN Refugee Agency (UNHCR), Lebanon remains the country with the highest ratio of refugee per capita in the world.  Lebanon today is a home to one and a half million Syrian Refugees, half a million Palestinian Refugees registered with the United Nations Relief and Works Agency for Palestine Refugees in the Near East (UNRWA), in addition to over fifteen thousand refugees from other countries, including Sudan, Iraq and Ethiopia. Migration for work is also another type of displacement that is less addressed when speaking about the struggles of displaced groups in Lebanon. We, in the feminist movements in Lebanon, find it crucial to include the struggles of all displaced populations into our fight for human justice.

Among all refugees in Lebanon, Syrian refugees have been suffering the worse. When the flow of forced displacement first began in 2011, Lebanon originally adopted an open border policy. However, in 2014 Lebanon decided to close the borders in the face of Syrians fleeing war, and even stopped renewing the residence permits for the Syrians who have already entered Lebanon in a legal manner. But because the violence in Syria remained to escalate, this was leaving people with no choice but to cross the borders illegally. As a result, many of the Syrians who entered Lebanon, or decided to stay in Lebanon, became illegal in the country.  According to Human Rights Watch reports in 2019, 74% of Syrians in Lebanon have no legal status in the country.

It is important to indicate here that it was an act of state power to render people illegal. By refusing the entry of humans fleeing from a war zone, it led to the creation of illegal routes of entry. This situation of illegality has tremendous impact on the lives of refugees as it makes refugees highly vulnerable to human rights violations. More specifically, Syrian women have become prone to violations more than ever: as women became subject to crimes, harassment, molestation and abuse, they could not seek any legal protection or report these violations to the relevant authorities due to the risk of deportation. Furthermore, awareness of this legal lacuna enabled both organized and non-organized practices of violence against Syrian women to expand.

By knowing that Syrian women could not resort to the authorities, various groups began to target Syrian women as subjects of racism and trafficking. The state was performing this deliberate decision of rendering Syrians illegal, therefore putting them in danger, as a tool of pressure to push them out of the country. Throughout history, we have repeatedly seen women being used as weapons in wars, and we have observed in pain the manner in which violence against women is used as a way to threaten communities and terrify populations. In the Lebanese setting, the state is systematically and knowingly jeopardizing women, using them as a weapon against refugee settlement.

Another refugee crisis taking place in the same country, only with a much longer history on the Lebanese soil, is the Palestinian refugee crisis. Known as the world’s longest refugee crisis, and the world’s biggest stateless community, Palestinian refugees have been  dubbed to be in limbo. Being in limbo means that, despite the fact that they have been present in Lebanon since 1948, they have no legal means of settling permanently here, and their right to return home still has no prospects in sight.

Female Palestinian refugees are legal in the country, however they face serious issues of recognition of their needs as women as the humanitarian agencies provide assistance and protection in a gender-blind manner. In other words, lack of general intersectionality leads to the view that “refugee” equals “male”. For example, when humanitarian actors choose to provide refugees with hygiene kits or health supplies at times of emergency, their efforts completely disregard women’s basic needs, such as sanitary napkins, thus making “men” the primary category of refugees whose needs are to be catered.

The problem of intersectionality goes deeper in the long lasting story of Palestinian refugee camps in Lebanon. The humanitarian medical system in place takes no consideration that refugee women are both female and refugees. In other words, the humanitarian system must attend to specific needs that are common to refugee women who have experienced displacement or severe living conditions, but may not be as common among citizen or resident women. For example, medical research shows that women who have experienced trauma or who are living in severe conditions are more likely to experience complications during birth and pregnancy. Therefore, the medical system needs to take into account that refugee women require additional health care measures.

Another significant problem related to the health of Palestinian refugee women – it is not only limited to them but also extends to influence all refugee women in the country – is the paternalistic power over the bodies and reproductive choices of refugee women. Palestinian refugee women, in addition to all refugee women in the country, are stigmatized for making the decision of motherhood. Refugee women are often strongly encouraged to use contraceptives to diminish birthrates, and are scolded publicly for choosing to bring children into the world. Because they are seen as refugees, they are deemed as ineligible to populate, and their life-changing choices are to be approved by the host state. In such situation, where women have no autonomy over their own bodies, we care to remind that forming a family is a natural human right, as natural and as essential as food and shelter. And that it is displacement and the wars that are the unnatural practice which needs to be scolded and combated.

Lebanon’s migrant workers may be seen as the least vulnerable groups as they are not fleeing war. But, in fact, migrant workers in Lebanon often experience something that is categorized as a form of modern slavery. Around 250 thousand female workers who migrate from countries such as Ethiopia, the Philippines, Bangladesh, and Sri Lanka to Lebanon to work as domestic helpers must undergo the Kafala. The system of Kafala requires each worker to be sponsored by a citizen of Lebanon. That employer becomes responsible for the worker’s visa of entry and legal status in the country. Under this patriarchal slavery system, workers are excluded from Lebanese labor laws, which normally regulate minimum wage, maximum working hours, vacation, and overtime. Instead, workers become parented, controlled and completely disposed for their employers.

In essence, the Kafala system concentrates power exclusively in the hands of employers, enabling them to have complete control over the personal lives of their employees. As a result, migrant workers in Lebanon are often subject to abuse, but they cannot report these violations because they are not protected by the labor law, and because such reports put them at the risk of deportation from the country. Migrant workers who work in Lebanese homes often get physically assaulted, raped, or starved behind closed doors, but have nowhere to go and no legal mechanism to resort to. Their mobility is also limited through physical and verbal abuse. In addition, many times, migrant domestic workers are the object of transactions that take place between one employer and another. They even use the word “sale” to refer to a “no longer needed domestic helper”. Once again, the state is the agent that is knowingly leaving space for serious human rights violations.

The feminist movements in Lebanon have not been silent towards the oppression of their sisters. They have been constantly and increasingly moving in solidarity. In the past, grassroots movements coupled with legal lobbying has been fruitful in changing some of the laws towards the protection of women. In the past few years, especially with the October 17th revolution[1], feminists groups and grassroots movements have been taking both the streets and the offices to protest for the rights of their displaced sisters. An example of this progress was recorded when the Lebanese Parliament was finally pushed to draft an alternative law to the Kafala system. Not knowing if this law shall be legalized, the feminists of Lebanon continue to stand strong against the Kafala and any patriarchal legislation seeking to oppress women regardless of their nationality or origin.

To conclude, as a feminist movement, as sisters, we will continuously strive for the recognition of women and their needs in every humanitarian crisis. We demand intersectional approaches that leave nobody behind. We demand the immediate removal of the patriarchy over our mobility, our lives and our bodies. We are sure that we, as sisters, will protect each other. However, we do demand that the states stop systematically putting us in danger. We demand justice, human treatment and protection for all those, men and women, seeking safe refuge from any form of injustice in the world.

Yafa El Masri, from the World March of Women, is a Doctoral Researcher in Human Geography and Palestinian refugee in Lebanon.

[1] On 17 October 2019, protests against the new proposed taxes took place in Beirut, Lebanon.