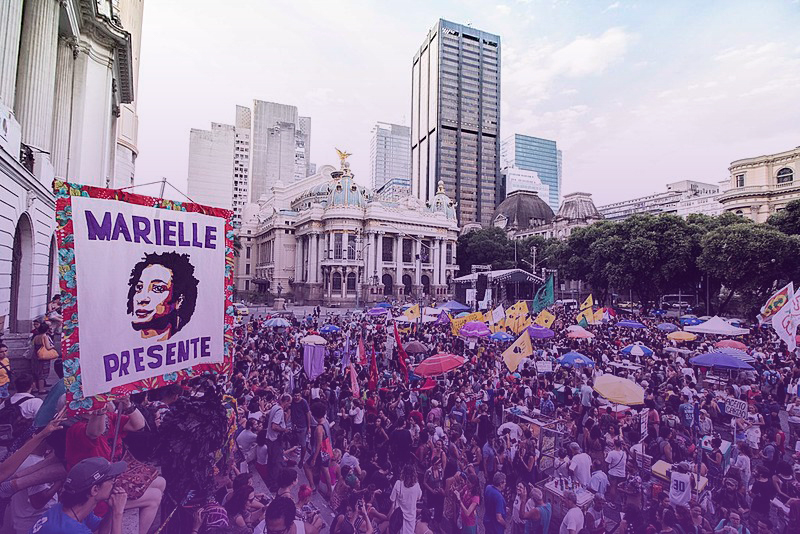 Four years have passed since the assassination of Marielle Franco, the fifth most voted councilor in the city of Rio de Janeiro. Marielle was serving her first term when she was executed on March 14, 2018, inside a car in downtown Rio de Janeiro. One of her murderers, retired police officer Ronnie Lessa, a neighbor of President Jair Bolsonaro, was convicted in 2019. The motive and perpetrators of the crime have not yet been identified by the justice system.

Society is mobilized to find answers. In Rio de Janeiro and other parts of Brazil and the world, huge street demonstrations have been organized. Marielle Franco has become a symbol of the fight against militarization and social injustice.

The councilor, who identified herself as a woman, black and from a favela, was monitoring the military intervention promoted by the government of coup perpetrator Michel Temer.

The violence that crosses Brazil

Since 2018, in addition to the absence of answers from the State about the crime, we saw the election of Bolsonaro, which went hand in hand with the United States and Israel – two states ruled by war and destruction.

Brazil, unlike many countries, went through a military dictatorship. This dictatorship did not end completely, because the total amnesty for the military, without trial for the torture and murders that took place at the time, left an open wound. Our country has not managed, in its history, to break with the legacy of the military dictatorship. It is a country that has a history of conciliation, of reforming these authoritarian norms. And “Bolsonarism” is the result of that.

Six years after the coup that removed Dilma Rousseff from the presidency, four years after the assassination of Marielle Franco, three years into Bolsonaro’s government and after two years of a pandemic, Brazil is going through a dismantling of public policies that serve the population, such as health, education, social assistance. However, it continues to invest heavily in the security sector and in making the legislation on carrying weapons in the country more flexible, something that is now regulated by the Statute of Disarmament.

No more guns, no more deaths

The number of shootings has been increasing in the country and some “new” initiatives have been presented by Cláudio Castro’s government in Rio de Janeiro. Jacarezinho, for example, is the favela where the biggest shooting in the city of Rio de Janeiro happened on May 6, 2021. The replacement of the Pacifying Police Unit by the Integrated City Program presented a series of proposals for the favela. In practice, the new program culminated in the murder of the suspect of killing a police officer during the shooting.

For years, Rio de Janeiro has served as a laboratory for racist public security policies in the country. These programs always wear different guises and end in deaths.

In 2020, the Argument of Noncompliance with Fundamental Precept (ADPF 635) determined that police operations should cease during the pandemic. Non-compliance with ADPF is constant. Territory disputes between militia and drug trafficking make the people who live in the favelas of Rio vulnerable to highly armed individuals. Intelligence operations only impact the surface, without attacking the root of the problem.

It is necessary to build public security alternatives that consider the debate on social transformation. Therefore, it is essential that we demilitarize our thinking.

For another security model

Public Security is not about police force, operations or weapons. Safety is the state, quality or condition of someone or something that is free from dangers, uncertainties, assured of damages and eventual risks. It is a situation in which there is nothing to fear, and Public Security only exists if it is for everyone, in all territories and without weapons. To speak of this condition is, then, to address the full right to life and territory.

It is time to break with militarized thinking and consider that security means street lighting and occupation of empty and abandoned spaces by private capital and public power. It means housing programs that go beyond the territory, while providing opportunities for street vendors and local businesses, which would increase the presence of people on the streets everywhere.

Marielle identified as a woman from the favela. Favelas, which are the most unsafe places to live in Rio de Janeiro, need to become completely safe. However, we are stuck with the military police, which was instituted by the military dictatorship in 1969, whose main objective is to protect the patrimony and maintain order.

Real investment in public education, prioritizing places that are more socially vulnerable, a basic income program, an income distribution program, the implementation of restorative justice and the elaboration of urban reform projects aimed at improving the quality of life in poorer regions of the cities must be seen as public security measures.

Marielle Franco questioned this system, denounced the arbitrariness of police operations and actions in the favelas and repeatedly pointed out that the so-called “war on drugs”, considered as a public security policy until today, is, in fact, the genocide of the black and poor population.

Four years after Marielle’s death, we have more victims of this civil war and more questions about what motivated this atrocity.

We, who remain alive and well, are presented with the horizon of change: it is the increase in the presence of women, people from the favelas, black men and women in spaces of power, so that, at last, we can guarantee public security for all.

Dara Sant’Anna is a Law student, activist of the World March of Women, the Coletivo Enegrecer and the Movimento Negro Unificado in Rio de Janeiro.