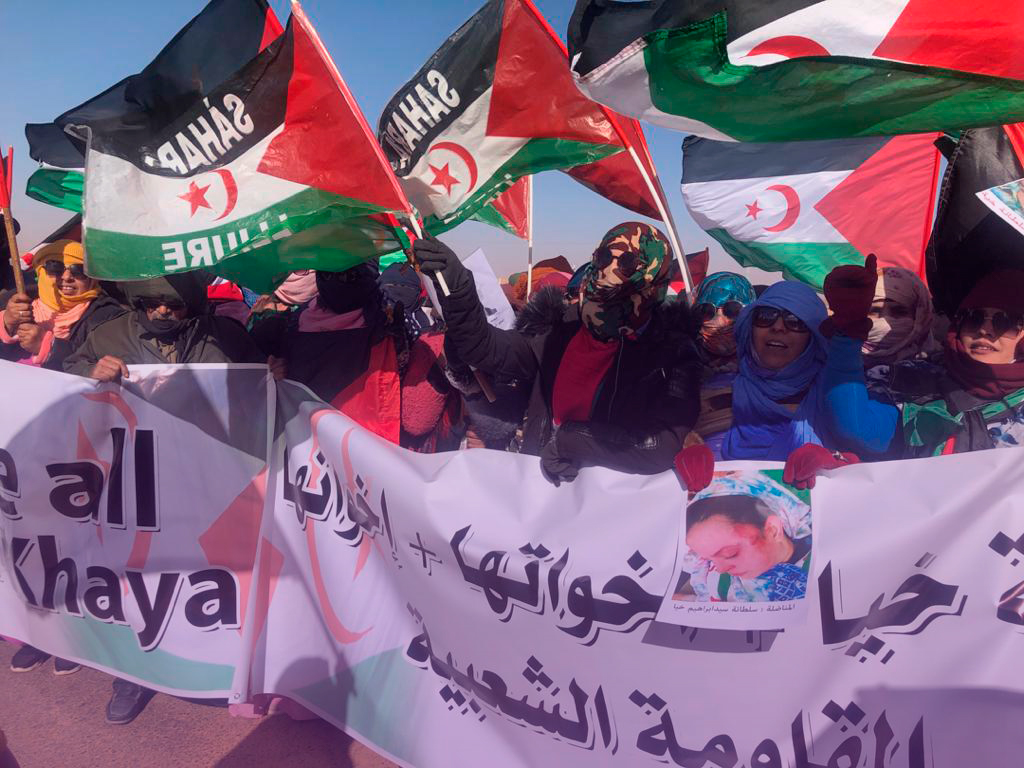 “Until Our Territories Are Free”: Women From Western Sahara in Ceaseless Struggle

To mark the International Day of Solidarity with Sahrawi Women, we spoke with activist Chaba Seini Brahim.

February 18th is a day of struggle for women from across the world who are committed to the fight for sovereignty and people’s power. It’s the International Day of Solidarity with Sahrawi Women.

The Sahrawi people resists the violent occupation of their territory by Morocco. Western Sahara achieved independence from Spain in 1975 and was immediately subjected to Morocco. Since then, Morocco has brutally occupied the Sahrawi territory. A ceasefire came into effect in 1991 between the Moroccan state and the POLISARIO Front (acronym for Popular Front for the Liberation of Saguia el-Hamra and Río de Oro), but it was not enough to put an end to the violation of human rights and arbitrary arrests against the Sahrawi people. And peace will not be possible as long as they are denied the right to land and self-determination.

In November, the Polisario Front declared war against Morocco, in response to the Moroccan violation of the ceasefire and the criminalization of those who fight against the militarization of life. As the struggle escalates, this new reality has resulted in frequent and blatant violent attacks and war crimes committed by the Moroccan army. Women, responsible for maintaining life, food, care, and the community, are facing the challenges posed by the occupation of their territories. Therefore, they are great fighters and are also responsible for strategies to tackle colonialism and violence.

We spoke with Chaba Seini Brahim, a member of the National Union of Sahrawi Women (NUSW) and the World March of Women. The NUSW was created in 1974 to “make all women aware of their position in society and their role in national independence” and to “guide them regarding the role that must be played in the independent Sahrawi nation and for the preservation of the victories achieved in the process of national liberation.”

In November 2020, the Moroccan army violated the peace agreement and now the Sahrawi people is experiencing a war situation. Can you tell us how this happened and what is the current situation?

The pending of a peaceful response to the conflict in Western Sahara by the UN [United Nations] for nearly 30 years has motivated some desperate Sahrawis to block the illegal El Guerguerat¹ crossing in Western Sahara on October 20th, 2020. For this reason, the Moroccan army set off on November 13th, 2020 to force demonstrators out, thus violating the ceasefire proposed by the UN in 1991.

The Sahrawi army did not wait around and on the same day they clashed with Moroccan forces across the more than 2,720 kilometers [1,700 mi] of the “Wall of Shame”, where Moroccan troops are deployed in the territory of Western Sahara. Since then, there have been more than 500 attacks to Moroccan army forces in Western Sahara and in southern Morocco.

The war has not eased one day since November, causing material and human losses. Even though Morocco continues to deny this war for strategic reasons, it will not stop until the complete liberation of the Sahrawi territory or until martyrdom.

The Moroccan occupation is patriarchal and very violent. Can you tell us a little about the tools and instruments of the occupation — that is, how does it happen in everyday life? What changes with this war situation?

Actually, violations of all human rights have never ended in Western Sahara. Since Morocco came in, in 1975, to this day, the iron fist of repression has always been around against Sahrawi citizens and human rights activists. When the POLISARIO front declared war, this repression drastically escalated. Most of our Sahrawi activists are now in mandatory house arrest, with the police outside their doors. There is so much intimidation that these activists cannot receive visitors or leave their homes without being followed by the police.

We, Sahrawis, continue in our search for the more than 500 missing persons since 1975. Right now, there are about 39 political prisoners. The situation is so grave that we are asking the help of the International Committee of the Red Cross for protection and the establishment of a humanitarian corridor, because there are civilians in the armed conflict zones.

Sadly, the global response to the violations of human rights is generally very weak. Both the International Red Cross and the UN have frustrated the expectations of the Sahrawi people regarding the protection of their fundamental human rights. We are asking the international solidarity movement to promote a bigger mobilization so that the Red Cross comes visit the Sahrawi political prisoners in Morocco and that the MINURSO [United Nations Mission for the Referendum of Western Sahara] take on the protection of human rights as part of its peace mission mandate in Western Sahara.

What is the role of women in the Sahrawi everyday resistance and struggle?

Both in occupied Sahrawi territories and refugee camps, women have never stayed behind when it comes to fiercely defending the independence of the Sahrawi people. Day after day, women are increasingly present in the peaceful resistance of the Sahrawi people in the occupied territories, as they demonstrate every day calling for the end of the Moroccan occupation. They are the ones who are beaten and humiliated by the Moroccan regime. Over the course of 50 years, Sahrawi women have never stayed behind, and they have fought side by side with their brothers for the liberation of Western Sahara.

Sahrawi women are the ones who suffer the most with the barbaric actions and tortures committed by the occupying country, because they have peacefully protested the most against the illegal presence of Morocco here. There are videos and pictures, a lot has been documented, to show the brutal repression they suffer every day.

How do you see the impact of the war on social bonds and communities?

I am really proud of my Sahrawi people. This second liberation war has further united the Sahrawi people to reach our main goal, which is complete independence.

It is striking to see that, when wars break out, people tend to flee or seek refuge; but in the case of Western Sahara, we have seen Sahrawi citizens who work in Europe coming back to the battlefront, enlisting to fight for liberation. It is unbelievable that this peaceful people is forced to take up arms to achieve peace.

War never leads to anything good. It destroys families, it destroys the social fabric, it is a terrible thing. But the Sahrawi people is determined to make that sacrifice to achieve peace and independence.

How do you see international interests, including those of transnational corporations, the stances and actions of the United Nations on the situation of Western Sahara?

Western Sahara will not be an autonomous territory until it is decolonized. Therefore, the presence of any international corporations or agreements entered into with the Moroccan occupier since 1975 to this day are illegal. Any exploration of natural resources in Western Sahara without the consent of the Sahrawi people is illegal and plunderous. We demand that these companies stop looting our resources until the end of the conflict, because the money invested in Western Sahara is going into the pockets of Moroccan generals and of the corrupt king Mohammed VI, who are illegally occupying our territory.

What are the demands of the Sahrawi people and the POLISARIO Front?

Can you talk a little about the International Day of Solidarity with Sahrawi Women, which is part of the calendar of actions of the World March of Women? From the perspective of grassroots feminisms, how can we strengthen the struggles of Sahrawi women internationally?

The International Day of Solidarity with Sahrawi Women is celebrated every year on February 18th, and many different forms of celebration are held by different groups of the World March of Women. The activities we hold on this day give exposure to what Sahrawi women suffer every day in their struggle to enjoy their legitimate right to independence and their humanity with dignity, without occupation. Marches, sit-ins, film exhibitions, lectures, and other actions are carried out to celebrate the date in all corners of the world.

Today, more than ever, Sahrawi women need women from all over the world to mobilize as a demonstration of solidarity with our struggle for freedom and dignity. Especially in these difficult times of war, when Sahrawi women are saying goodbye to their husbands, sons, and brothers as they head to the liberation front. Not only solidarity, Sahrawi women also need initiatives to pressure international organizations to fulfill their responsibility so that the people of Western Sahara have their right to independence safeguarded.

This is why our struggle continues. We will continue to march until our territories are free.

¹ El Guerguerat is a buffer zone on the border between Western Sahara and Morocco through which Sahrawi natural resources plundered by Morocco are moved. The Sahrawis have protested against this violation to block this crossing point.