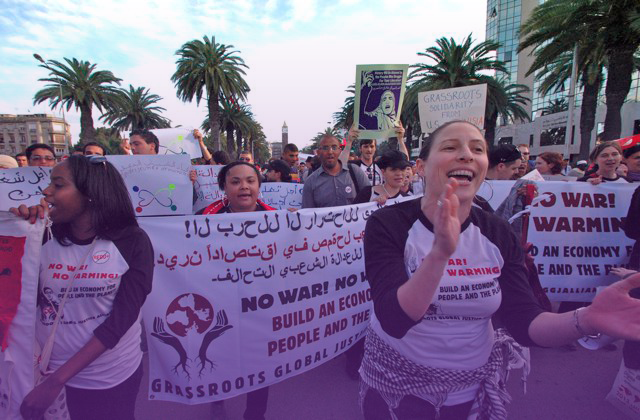 Cindy Wiesner: “the U.S. movements are calling for no to war”

Read the interview with the GGJ executive director about the role of the U.S. power on imperialism and wars

Feminist, social and peace movements have been denouncing the impacts of the United States imperialist policies for a long time now. The U.S. power is responsible for sanctions and blockades against countries that refuse the empire. It is responsible for the occupation and exploitation of people’s lands and territories in South countries. It controls the countries’ economy and self-determination by imposing free trade agreements, where transnational corporations go unfettered, and also by leading military occupations, armed attacks, and the militarization of its strategic allies. The role of the U.S. and NATO in the Russia-Ukraine war demands that the grassroots movements keep up, with even more intensity, an agenda of radical struggles against armamentism, militarization, and wars.

Capire talked to Cindy Wiesner, the executive director of Grassroots Global Justice Alliance (GGJ). GGJ is a membership-based alliance that works across multiple sectors of the working-class. GGJ’s work is at the intersection of climate and environmental justice, anti-militarization, anti-war and occupations, demanding a just transition to a feminist, regenerative and anti-racist economy. Active in the feminist movement, GGJ is the U.S. national coordination body of the World March of Women.

On the interview, Cindy highlighted the interconnections of militarism and the climate crisis, and the importance of the pressure the feminist and grassroots movements from the country are doing to Biden’s administration and the denounce of interests and profits of the war industry. “We know the devastating impact that happened in Afghanistan and how that process has happened. So we have to hold our government accountable to what is happening to the people there, and what a terrible role the U.S. played there in the last 20 years. Also what’s happening in Yemen, Syria, Palestine and Somalia. The U.S. has a role in all of those conflicts”. Read and listen to the full interview below:

How do you see the role of the USA, articulated with NATO, in this encouragement of war and armamentism of nations?

First of all, the U.S. movements – and we as GGJ – are calling for “no to war”. We need to be clear that there should not be a military escalation in Ukraine and in the region, and we are calling for diplomatic cooperation. We know that it’s our role to pressure the Biden administration, our government, to take those steps and to ensure that this does not become a bigger issue. Also, we must understand the role that the U.S. plays at this moment that Biden is trying to set himself up and put the country back into a superpower position. He has to not use this opportunistically. We know the role the U.S. has played in pushing NATO as a way to deal with the geopolitical negotiations that are happening.

It’s really important that we stand in solidarity with the Ukrainian people. We’re seeing day to day on our TV screens, on the news, in the radio, the senseless impact on civilians. We’re seeing the mass migration that is happening and the devastation to the Ukrainian people’s territory. The US government has a history of use of power and bullying. Thinking back, it’s been 31 years since 1991, the first Iraqi massacre. So much of what happened there was a senseless war, where there were no weapons of mass destruction. Iraq was devastated, but what we saw was a huge level of profit, particularly by U.S. transnational corporations. Like what we are seeing now.

How have the grassroots movements in the U.S. been dealing with Biden’s agenda and the positioning of his government towards war and imperialism?

On one level, we are very glad that we are not living under the Trump regime. That’s really important because of what we have seen, even in terms of the statements that Trump has made in support of Putin and the invasion.That’s a difference of positioning and we have to understand that nuance. Biden has, at this point, chosen a different sort of mechanism: doing sanctions – even with us being critical of sanctions. We know that they don’t kill immediately, they kill slowly.

Part of the grassroots peace and anti-militarization movements have basically made a call to put pressure for them to be diplomatic as a way to deal with the conflict. We saw an unprecedented amount of millions and millions of dollars be released by the U.S. Congress to send military aid to Ukraine. Many times it gets juxtaposed around the fights that we’ve been in the past around ensuring a people’s bailout, ensuring to deal with the needs of the communities that have been impacted so direly because of the pandemic. It’s not a choice of “either-or” taking care of the people in the U.S. It’s about being able to see that, when the Congress and the president have political will, they’re able to release money.

We say “no” to the aid that happens at the cost of what it is that people are suffering. We know the devastating impact that happened in Afghanistan and how that process has happened. So we have to hold our government accountable to what is happening to the people there, and what a terrible role the U.S. played there in the last 20 years. Also what’s happening in Yemen, Syria, Palestine and Somalia. The U.S. has a role in all of those conflicts. We must be in solidarity with those impacted people because of war, militarization and occupation.

There’s also the role of U.S. transnational corporations. We know that another layer of this is a resource war. The fossil-fuel has an impact in terms of the power that Ukraine and Russia have in that region. It’s a moment for us to call for an immediate decarbonization of the moment, to call in people’s sensibilities to actually say that we need to divest from fossil fuel and militarization. We want peace and sustainability, a different paradigm that we want to be living. That’s an opportunity for us in the movement to raise those issues, particularly at this moment that we’re still living in the pandemic.

What are paths and horizons of feminist movements for the construction of peace? How does feminism contributes for peace?

We’ve been part of a process in the United States with other sister organizations. One of them being Women Cross DMZ, which has been calling for the stopping of the Korean War, one of the longest wars of U.S. history, and calling for the reunification of Korea. We also work along with MADRE, which is another organization that supports peace agenda and women’s and feminist movements globally. We have been part of a process called the Feminist Peace Initiative, which recently launched a “No war and no warming” pledge. We’re trying to target our congressional representatives to sign on to this pledge to make the connection between the climate crisis and militarization and imperialism, but also to say that there is another avenue. There is a feminist approach to thinking about peace and about well-being, and what does it mean to respect people’s sovereignty and territories.

That work we’re trying to do is both to educate folks around the interconnections of our fights against militarism and the climate crisis and also to put pressure on our government to be able again to push for cooperation and diplomacy as a way to resolve issues and problems.

At GGJ, we’re promoting a regenerative anti-racist feminist economy and part of that is a long-term view. After living under a patriarchal misogynist racist and homophobic Trump regime, it needed to be very clear the rise of these authoritarian macho figures and leaderships that are gaining ground through electoral processes. We need to articulate our alternative to that, what is actually going to be the counterpoint to that model.

Ultimately, it became very clear throughout the pandemic the role of reproductive labor which saved us. It was often women, gender non-conforming people, people within the service industry who went to work to keep the rest of us alive. That point, more than ever, has made clear why we need to talk about a very different economy, practices, politics and policies.

In the GGJ’s work is very clear this feminist analysis, but it’s a grassroots feminist analysis very influenced by African-american, Black, radical, queer, lesbian, trans, campesina, Indigenous, global feminist perspective. That really articulates the world that we’re wanting to live in not just 50 or 200 years from now, but also that we start practicing now. And what does that begin to look like? That is the political project that we’re a part of, along with a global feminist movement, with the World March of Women, but also many other counterparts around the world.