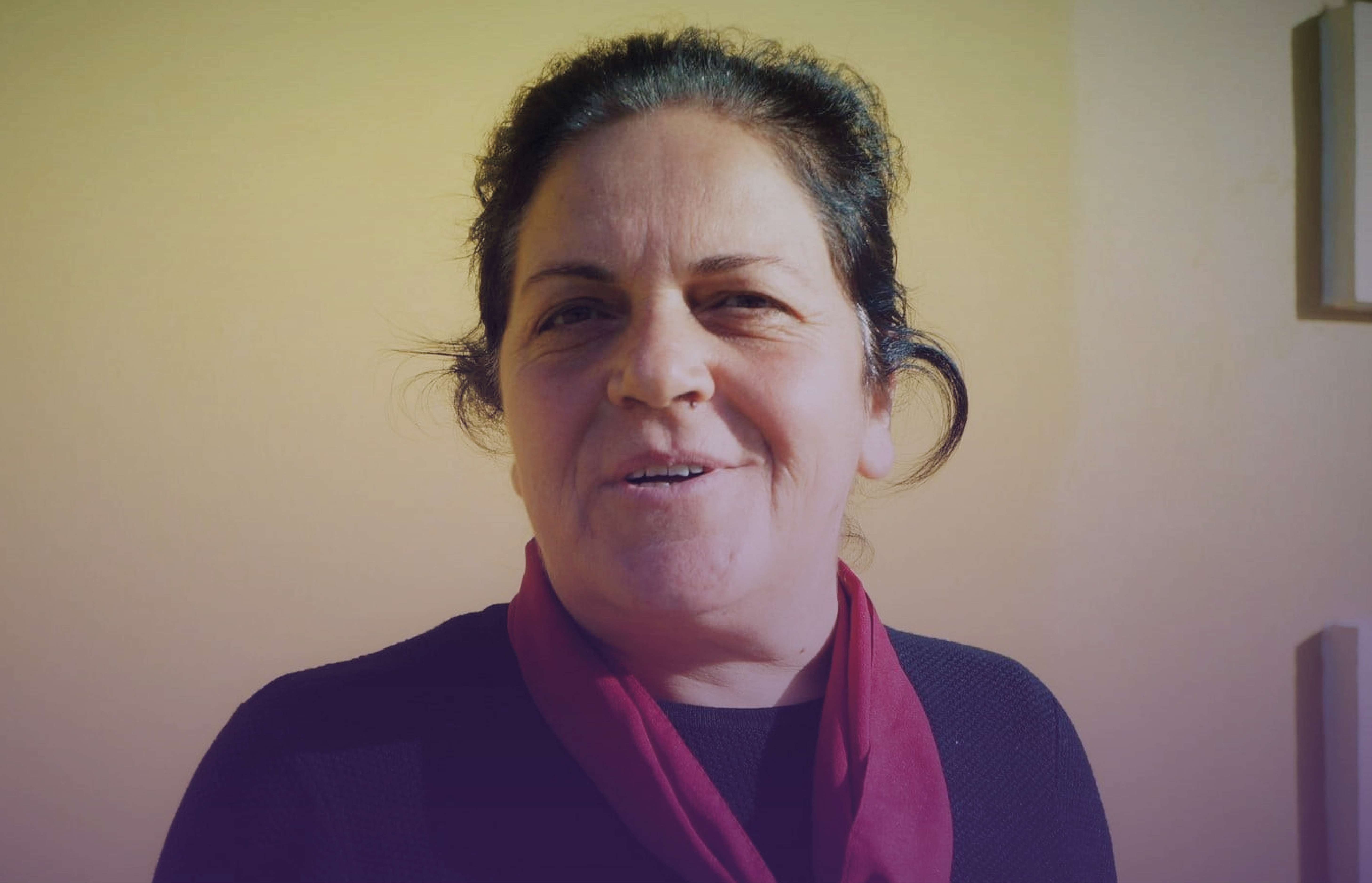 Feminist Struggle for Freedom and Sovereignty in Palestine

This is an edited version of a speech Khitam Saafin gave in October 2020. Khitam is currently detained by the Israeli occupation. Free Khitam!

Good evening. I am Khitam Al-Saafin, from the Union of Palestinian Women’s Committees — UPWC. I’ve had the honor of getting to know and meet so many sisters of the World March of Women, and I am happy to meet some of them again, because this refreshes the activism and life in me.

First of all, I salute all the women who are taking part in this event, which is a milestone for anti-imperialism. As a global movement of women and as Palestinians, we definitely converge in our anti-imperialist objectives, because we consider imperialism, capitalism, colonialism, and occupation the main forces persecuting the peoples and creating social and economic crises on Earth — from the creation of poverty, hunger, and disease to issues related to the environment, wellbeing, social life, oppression, violence, and militarization.

We still live under colonialism and the Zionist occupation of Palestine. Our people continues to face this colonial attack, clearly backed by the global imperialism spearheaded by the United States of America. More than half of the Palestinian people still live as refugees, in their homeland or elsewhere, as a result of the great forced displacement of 1948. We are learning that all of us Palestinians are subjected to the control by the occupation over all aspects of our lives.

Tools of Imperialism To Control the Peoples

In the past two years, the imperialist approach to Palestine has been escalating. When the “Deal of the Century” was proposed, it ignored all national rights of the Palestinian people. It was an attempt from the heart of global imperialism and Israeli occupation to eliminate the question of Palestine as a cause for national liberation, to eliminate the demands of the Palestinian people to return, to self-determination, and independence. And of course, this deal was announced from the White House.

All the children of our Palestinian people, men and women, have rejected this deal and argued that our cause is the cause of our homeland. There is an international resolution about the question of Palestine that establishes international rights, and so we pursue it. In this context, the current conflict is happening based on the first lifting of Palestinians’ national rights and on the rejection of all forms of persecution and violations that the Palestinian people is exposed to by the occupation forces.

In short, when we talk about sanctions, we are talking about the tools of imperialism to control the peoples. We stand in solidarity with all the peoples who suffer with sanctions such as this siege that has been imposed on us. We are proud of the Cuban Revolution for facing the blockade for decades. The Cuban people has stood strong in their revolution. We stand in solidarity with all the peoples, from the Arab world and other regions exposed to such a blockade, where we witness catastrophic examples for societies. The matter of sanctions is also very important because, by imposing them, global imperialism controls the trade system, the monetary system, and all systems in people’s lives. As a consequence, these regions are blocked from receiving financial resources and struggle to receive humanitarian aid due to this siege.

In Palestine, we struggle with many forms of siege, including the Separation Wall, which has isolated areas in the West Bank from the rest of Palestine and Jerusalem. There is an even worse siege in the Gaza Strip, and all this occupation has devastating consequences for the Palestinian community. All reports and graphs show that, in 2020, Gaza has been unfit for human life, and this is what is happening right now: social, health, and economic crises in Gaza are increasingly deteriorating. We have come to a point in which the Palestinian society has suffered irreversible violations. On the other hand, our Palestinian people in the Gaza Strip has tools of resistance and optimism, and they remain resiliant despite the high levels of poverty, disease, and illiteracy.

The isolation of Jerusalem from Palestinian lands has not been easy. Families have been displaced. Families are separated. Even if someone lives in an area two meters away from Jerusalem, they can’t move to the city, visit their children, or even go to a hospital to receive care. Also, the West Bank is sieged in different ways with several military checkpoints, and the occupation forces can shut down any Palestinian city in a matter of minutes. What this is trying to do is control the economy and society. To force Palestinian men and women to adjust to this project, they overpower our militants and keep them in detention, organize the growing financial siege, and set multiple laws against the Palestinian people, even controlling small details of Palestinian life. There is an attempt to completely destroy the Palestinian market to replace it with the Israeli market. They impose borders and crossing points to control foreign trade and even impose taxes on Palestian imports. The taxes are levied by occupation authorities, who control how they go to the Palestinian people, under a number of conditions. These conditions prevent the Palestinian people from achieving everything they could achieve.

Moreover, people are arrested and killed every day in several different places. There are 5,000 male prisoners and more than 36 women in prisons run by occupation forces, some of them in need of medical treatment. This is all part of the structure to attack the legitimacy of the Palestinian cause and the Palestinian grassroots struggle. And it’s clear that the United States and Western governments in general adopt the Zionist discourse against the Palestinian people.

Discrimination During the Coronavirus Pandemic

Our reality is one that faces the violation of the necessary procedures to care for our lives during the pandemic. The Israeli control how medications, medical equipment, samples, and all related things get to us. Consequently, the Palestinian people still face enourmous shortage of tests and other necessary supplies related to the pandemic. The Palestinian government has stated how the occupation has led the disease to spread faster. There have been cases of Israeli workers with suspected infection who nevertheless were deployed to the checkpoints, with no treatment or vaccine.

Every Palestinian Life Is Connected

This entire phenomenon is the result of global occupation, blockade, and sanction policies. The Palestinian people is subjected to many of these forms of control. Sanctions are reported as economic crises and there may be social penalties, like revoking residency permits of the people of Jerusalem, revoking the residency permits of men who go to pray, and banning travel and family visits. Palestinian life is completely connected, and this is why these punishments are used against Palestinians.

Women are always at the forefront and bear the weight of our conflict, spearheading their families, in cases of family detention, tackling poverty and disease. Moreover, Palestinian women have developed forms of resistance and battle based on the return to the land and on alternative, family, cooperative economy. This way, we try to fight the forms of persecution and oppression in the communities, with solidarity and more self-sufficiency, including providing healthcare, mental care, social, and legal services.

Unfortunately, the Palestinian domestic policies are based on incorporating the private sector, to the detriment of the public sector, which also weakens progressive sectors and leads them to face several problems in the context of the pandemic. We have produced a paper on the effects of the pandemic for Palestinian women in the West Bank and the Gaza Strip. Its results show that imperialism, capitalism, and neoliberal policy, when combined in multiple ways, create a scheme that leads to more persecution and more problems for impoverished and marginalized groups and women.

Violence has increased; poverty increases every day in Palestinian society, and our primary goal is to excuse women from certain services during the pandemic, especially because most of them do not work in the private sector. As Palestinian women, we assert the need to face the occupation and organize feminist and progressive solidarity in face of imperialism, capitalism, and racism in the world.

Even the demands of the feminist movements for legislation and policies for women are being severly attacked by traditional forces in Palestinian society. We, Palestinian women, can face anything. We are stronger and we are all united against racism and colonialism. We will continue until we reach our objectives as women: for equality and social justice, for the rights of our peoples, and for sovereignty over our land. Thank you!

Khitam Saafin is a member of the board of the Union of Palestinian Women’s Committees (UPWC) and a member of the World March of Women. On November 2nd, 2020, Khitam was placed under administrative detention by the Israeli occupation forces. She was expected to be released in early March 2021, but they pushed back her time in detention for another four months. #FreeKhitam.

This is an edited version of Khitam Saafin’s contribution to the “Anti-Imperialist Feminist Struggles Against Militarization, War, and Sanctions” webinar, organized by the World March of Women on October 7th, 2020.