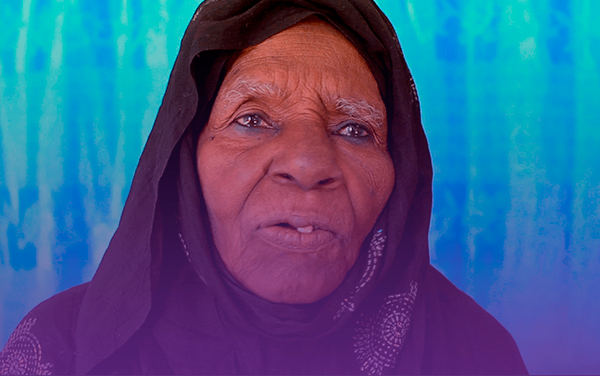 Al Khadra: “Nobody Taught Me How To Be a Poet”

We publish a translated poem by Al Khadra, an acclaimed name of Sahrawi poetry in defense of self-determination

This October, women from Western Sahara and around the world said farewell to the poet Al Khadra Mabruk. Born in 1938, Al Khadra created poems throughout the decades of anti-colonial struggle in Western Sahara. Since 1975, the Sahrawi people has been resisting the multiple aggressions perpetrated by the Moroccan occupation of their territory. The National Union of Sahrawi Women (Unión Nacional de Mujeres Saharauis – UNMS) wrote, on October 14th, that “Sahrawi culture is grieving. (…) We will never forget her contribution to keep Sahrawi women’s mark on poetry alive.”

In November 2020, the Polisario Front (Popular Front for the Liberation of Saguia el-Hamra and Río de Oro) declared war against Morocco, in response to the Moroccan violation of the ceasefire and the criminalization of those who fight against the militarization of life. As the struggle escalates, this new reality has resulted in frequent and blatant violent attacks and war crimes committed by the Moroccan army.

Al Khadra’s poetry is acknowledged for formulating an imagery of resistance, bringing art and politics together in a context in which to live means to take a stand. Al Khadra’s story was driven by a desire for liberation and self-determination for the Sahrawi people, while denouncing the violence perpetrated by colonial forces. “The dream I have is to see my people living with independence. Life without your land is not life at all,” she said in the documentary film Al Khadra: Poet of the Desert, by Noe Mendelle.

She would create her verse orally and then her friends or family would write it down. Her granddaughter, the singer Aziza Brahim, was one of the people who played this role with care and trust. Her first album, Mabruk, is a tribute to her grandmother and the history of their people.

I walked into a tank
under the shade of a tree,
the revolutionary smiled,
the Moroccans felt fear.

The tank took arms to my people,
it began to swim,
knowing the meaning of the struggle
the clearing, defending and attacking.

Inside it a brave army
who knows
how to handle weapons
in its occupied land.

Humiliated it fought
its enemy mercilessly
to reduce their weapons
and purpose to ashes.