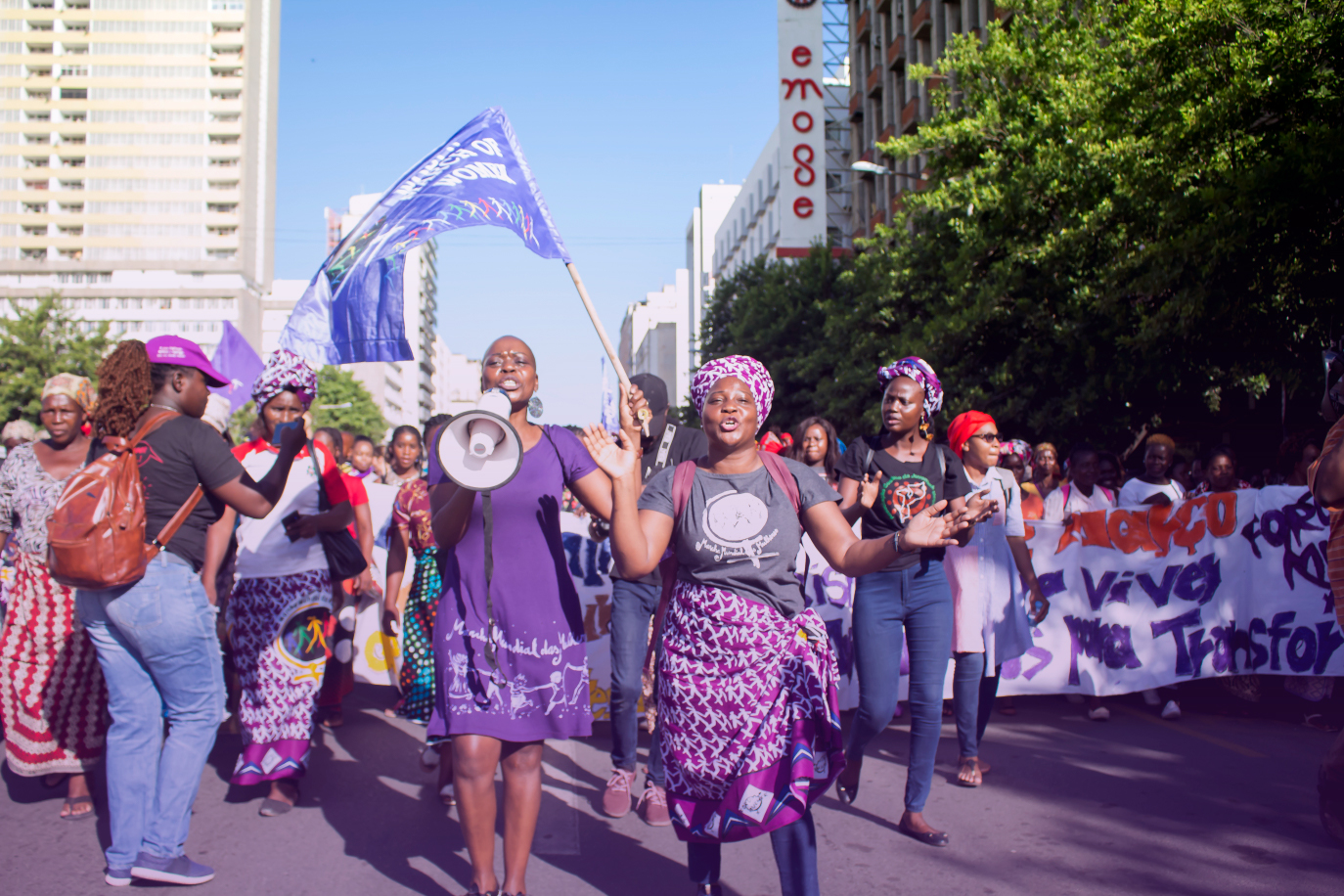 Feminism in Mozambique: For Land, Freedom, Sisterhood, and a Life Free of Violence

We cannot talk about women’s living conditions in Mozambique without addressing land encroachment. Big investment companies come here and our government continues to give them land. Land in Mozambique, just like anywhere in the world, is the primary means for women’s livelihood. More than 80 percent of women live on and off the land. These foreign investments create feelings of uncertainty, insecurity, and fear among us, because we are not allowed to effectively take part in the decision-making processes.

When we look at the context of COVID-19, we realize that this situation was used to further land occupations and force peasants and producers out of the land they originally come from. This is about capitalism coming aggressively and creating terror. It’s hard to keep track of everything because a lot of the deals are made by stealth. In the Cabo Delgado Province, for example, the Mozambique government is known to have signed land exploration and concession agreements with transnational companies. Because of that, a lot of the local population had to flee their own land, dodging bullets, being separated from the place where they belong. People lose connection with their land, their community, and themselves, because our identity is also built through these elements.

Behind the concession of huge areas of land to corporations is the discourse that claims that a lot of land is available. This is not true, because no land is without an owner! Anywhere, even if all you can see is trees or “uncared-for” forests, some local community is making use of that territory. These are areas where tradition is preserved or places of worship. Forests are where they get medicinal herbs to cure diseases and practice other local beliefs.

Many call women sorcerers because of their prayers and practices. But these are traditional practices women pass on from generation to generation. Knowledge is their strength. Those who hold capital and sexist power know this and they feel threatened by this power, which is invisible, but very strong. The risk is especially high for women’s lives. They are murdered, raped, kidnapped. With their knowledge, traditions, prayers, and powers, women are seen as a threat within the territories that are being encroached.

The concession agreements for huge areas of land destroy an entire richness of traditional knowledge and the diversity of forests, leaving nothing to the communities. What kind of development is that? And what is it for, if it is not to respect the will of the peoples?

Women have been used as an instrument of war in the conflict that the country is facing, especially in its central and northern regions. Recently, in September 2020, a woman was brutally murdered by the Mozambique armed forces, who shot her in the Cabo Delgado Province. The government claimed that she was killed by the terrorists, but the community argues that the armed forces are the ones to be held accountable for the crime. She was accused of being a sorcerer serving terrorists, but no investigation was conducted about her background.

Women’s bodies suffer greatly during the conflict, because they are systematically used, mistreated, and abused in so many different ways. These women are mothers, wives, sisters, and daughters, who endure so much pain and humiliation, they lose strength to fight and resist the enemy. Women’s bodies are abused as a strategy to intimidate the men who refuse to sell their machambas (land) or who defend community lands. People feel powerless in face of brutalities like this. Violence is directly linked with the conflict for the exploitation of natural resources and nature.

Women are not only brutally abused in the context of the armed conflict, but also in the regions and areas where they are being resettled. Human rights are not observed and there is no focus on their specific needs. Many cases of sexual violence against girls and women are being reported in the camps. And what’s more worrisome is the situations we don’t hear about. A lot goes unsaid because they fear speaking up; there is a lot of mistrust and hesitance. They only speak when they find someone they trust or when they feel safe. The silence they carry says a lot.

We celebrate the fact that we have a law aimed at preventing violence, yet violence continues. Women are not provided with appropriate services. They don’t trust the Esquadra, the police force that responds to violence against women. Women are asked about what they did to suffer the abuse, and there are cases in which the perpetrators corrupt the police to stop the investigation process, which discourages women from reporting the abuse.

We also have been able to pass a bill to decriminalize abortion. We’ve conducted a strong campaign and now we have legislation on it, but there is still a lot to fight for, because we live in a country where reality does not reflect what’s on paper. We continue to monitor services so that they respond to women’s needs, but this is a huge effort we must make in order to be listened to—that is, to effectively enforce what’s on paper.

We have a Land Law, regarded as Africa’s most progressive legislation of its kind, because it protects the rights of individuals and communities. The law grants both men and women the right to land title use, yet patriarchy is strong: men always get the land title, and there is no legal aid available. Many women don’t know how to access the law and make sure their rights are respected. When big investment comes along, the government takes the land from citizens and communities, leaving them with nothing. Routine law enforcement is extremely flawed. This law is currently being reviewed, and rural women producers cannot be sure about the aspects that are being amended.

One thing worth mentioning is that many languages are spoken in this country. There are 17 different languages, and they are not mutually intelligible. In all countries next to Mozambique, they speak English. The language barrier is a challenge when it comes to sharing information. To fight the patriarchy, we also have to tackle the things that restrain their participation, their voice, and ability to be subjects of rights. Women’s silence is the result of patriarchy and colonialism.

In community decision-making spaces, for example, when a foreign company comes along to make local investments, they only speak Portuguese. A lot of the women in the communities don’t understand what they are saying, and even when they do, they don’t speak up, because they feel shy to use their own language. If these meeting sessions were held in their own languages, they would have a lot to say. They would talk about their concerns, most of which, as we know, are related to reproduction, water, land, to all the aspects of care with which no one else is concerned.

No one talks about how we need to reduce water fetching distance. About how we need maternity hospitals and healthcare facilities. We must find the energy to build a revolutionary process toward political awareness and discussion.

This is why we are trying to build strength and hope, to propose alternatives. Recently we have come down with a certain desolation, because we are struggling, yet we can’t find a way out of this scenario. The more our sisters suffer, the stronger this feeling of powerlessness grows. How can we overcome these problems?

Now with the pandemic, it becomes even more difficult to present our perspectives and demands, because we were mostly listened to out on the streets. Also, there is growing repression and our public political activities are banned. We are pursuing cooperation between ourselves to strengthen political struggle and awareness.

How can we set the pace with those who have been already walking this path and those who are now just starting? If we don’t start this conversation, we will remain in silence, growing shy, and that divides the movement, makes the struggle an individual endeavor.

How can we keep our feminist movement strong and vibrant? How can we build new forms of organizing? Those who are young want to do something new with the movement, something different. They want to reflect, propose, and act, but they face economic and social challenges. Everyone has their own pace. How can we set the pace with those who have been already walking this path and those who are now just starting? If we don’t start this conversation, we will remain in silence, growing shy, and that divides the movement, makes the struggle an individual endeavor. How can we bring everyone together, even when we are different? What does it mean to make things differently? How can we practice listening?

The experience of feminism in Mozambique happens through women’s movements and associations, locally, regionally, and internationally. The World March of Women provides a deeper sense to the struggle, denounces the system, dismantles what is in place, gives us unity. It’s a space for those who want to fight for their rights and don’t want to be stuck in theory, in an office, on the internet. It is the possibility of having a space for solidarity, meeting, and sharing.

By building feminism in Mozambique, we create new forms of political action. In June 2015, after the news broke about another rape case, we protested by lying on a busy avenue. This was an unauthorized protest, which could get us arrested. We were feeling brave and we were able to hold the demonstration for forty minutes, giving exposure to the case.

Other beautiful experiences are the nationwide and regional caravans, the camps set up in solidarity with women in military conflict contexts, and the feminist fires. Traveling on the caravans, we drove seven thousand kilometers [around 4,300 miles]. Despite the long, exhausting trips, being able to see women approaching us as we drove by their communities, to get to meet each other, listen to each other, sharing each other’s lives, all that was worth it.

The feminist fire is a conversation circle that we, young feminist women, have created to share our everyday challenges, expose our outrage, and strengthen our activism in defense of our rights. Traditions are very strong here, so we kept and transformed this cultural aspect of ours, the fire lit at the end of the day. This is a moment when those who are older pass on their testimonies to those who are younger, sharing stories, lessons, and pieces of advice for life. We practice this to be close to one another.

A lot of responsibility is shouldered by women. The fire keeps us warm, comforts us, and makes us feel that we are not alone. It gives us the courage to face everyday sexism. The fire is also a very strong symbol to us, and it has strengthened the feminist movement in Mozambique, because it’s a liberating space for women. What we discuss here stays here. By the end of the conversation, we burn patriarchy in the fire and invigorate ourselves.

Nzira Deus is a feminist, a World March of Women activist in Mozambique, the executive director of Fórum Mulher, and an activist for women’s and LGBT rights in Africa.