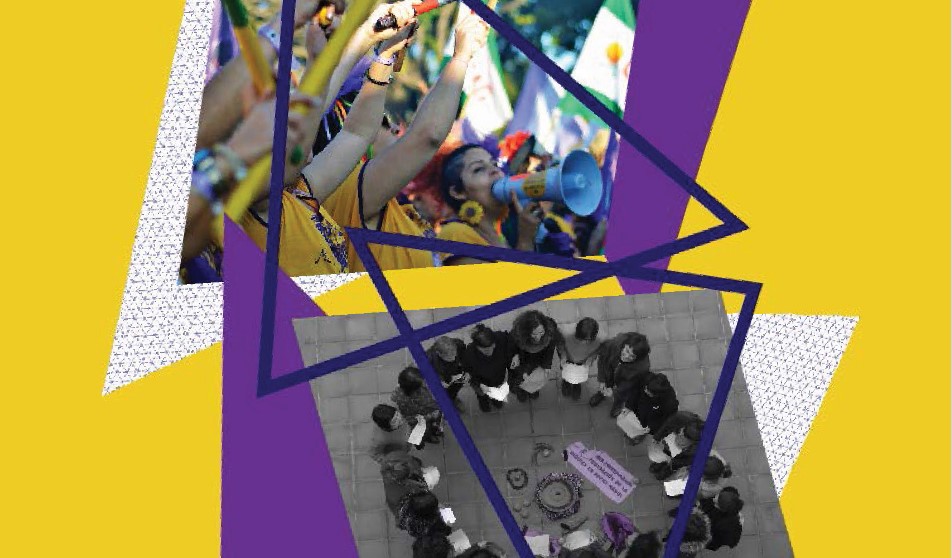 Read an excerpt from “Together and Rebellious: Exploring Territories of Feminist Economics,” a publication created between the Basque Country and Brazil.

The text below is an excerpt from Together and Rebellious: Exploring Territories of Feminist Economics, a publication produced collectively by SOF, a feminist organization and member of the World March of Women Brazil, and The XXK Collective – Feminisms, thinking, and action, a project based in Euskal Herria (Basque Country). These two organizations share common views about how feminist economy is a political proposal that articulates contents (concepts, analyses, and agenda) and political subjects.

The publication elaborates on the common language that guides this political proposal, grounded in topics and concepts such as the sustainability of life and the capital-life conflict. It brings together analyses and struggles around body, time, and territories. By investigating the continuities and discontinuities between South and North, it explores two fundamental phenomema regarding the reorganization of the system on a global level: the reconcentration of socioeconomic relations within the home and digitalization.

Together and Rebellious was published online and is available for free in Spanish, Portuguese, English, and German.

The excerpt below discusses the capital-life conflict and it is an invitation to read the publication and take part in this collective effort to understand the world and change it through feminist economy.

While the concept of the sustainability of life is a lens that can be directly translated into the register of a political commitment, the notion of capital-life conflict, on the other hand, is diagnostic. It enables us to denounce the system that is imposed on us and that, to different degrees, we also (re)construct. More than a concept, it is a framework that allows to organize struggles and alliances from different political subjects in resistance.

We understand that the capital-life conflict is the irresolvable structural conflict that characterizes the system of multiple domination (the “scandalous thing”) that we inhabit. We attempt to develop a complex vision of this biocidal system, understanding it as a socioeconomic system that creates hierarchies among lives in an intersectional way. In opposition to a flat and binary vision that counterpoises “capital” (which would not be situated in bodies?) and “life” (something pure or immaculate that floats in a vacuum?), we attempt to understand the complexity of social relations of privilege/oppression that are activated when we fight against racist and heteropatriarchal capitalism.

We want to “put a face to capital”: reveal which lives are the few that, for and in this system, are highly “valued,” and learn about their material and subjective conditions of existence. Here we find the subject in which the axes of inequality converge in their register of privilege, dominating the process of capital accumulation. That subject that holds corporate power is the white, bourgeois, urban, heterosexual male[1].

In the context of a disputed process of capital concentration, there are increasingly few of these subjects. The capital-life conflict emerges because the way through which they meet their vital aspirations is through accumulation, dispossessing the lives of others and the life of the planet, turning modes of collective reproduction of life into private modes of the “production” of capital.

In opposition to those few “highly valued” lives, lies the bulk of people who, expropriated from the means of reproduction, are valuable to the extent that they can be of service for that privileged subject, which they are useful for in different ways: as paid or unpaid workers, as consumers, as desirable bodies… Their living conditions are very unequal, depending on elements such as their purchasing power or the market value of their labor and, in broader terms, their position within the system of multiple domination (racist and heteropatriarchal capitalism).

Furthermore, a margin is opened up for the relative exercise of privilege and for the establishment of relations of servitude within this bulk of lives. Greater proximity to the circuits of accumulation leads to the fewer responsibilities to carry out invisibilized work to sustain life and lower rates of exploitation.But the fence is narrowing.

Constant attacks on living conditions have put an end to the horizon of labor with rights. Thus, we turn to the situation of Black women as the reference point that capital seeks to generalize. Black women’s situation of precarity and labor informality has now become the situation of the majority in the labor market in Brazil. The normalization of informality is reinforced by the discourse of “entrepreneurship” and the transformation of each individual into “human capital.”

What are the threads of (dis)continuity between territories of the Global North, such as Basque Country and the Spanish state? What are the living and working conditions of household employees, a sector in which international migrants increasingly join women from the popular classes? How does the peasant population disappear? What are the impacts of the Uberization of employment?

In broad terms, we understand that precarity in life is the new regime of existence for the social majorities, although distributed in a radically unequal way. This expansion and intensification of precarity results in an intensified perception of loss of control over our lives, which affects the possibilities of action for political subjects. Fear can be a powerful disciplining factor.

In this multi-dimensional and complex process of producing hierarchies, there is another set of lives whose “value” for the system is nothing more than death. Necropolitics becomes essential for the system. These are lives whose disappearance is “valuable” in an instrumental register (their disappearance is useful for the accumulation process, for example, in the case of Indigenous communities opposed to extractivism), as well as in expressive terms (for example, in the case of heteropatriarchal violence that allows for expressing the message of who dominates life, of who owns the lives of others). Finally, there are lives that for the system are nothing more than “human waste”: those who do not have any “value” even in death. We could understand the deaths along Europe’s borders in that register. It is not so much that the deaths of migrant persons and refugees is beneficial. It is simply that their lives are not “valuable” for the system and there is nowhere to dump them.

Understanding the system through this lens of complex and multi-dimensional inequality, shows that there is an injustice in the distribution of resources with which to sustain life, but there is also injustice in terms of the recognition of which lives deserve to be maintained. We could say that capitalism provides a materiality to that hierarchization of lives, while there are other social relations of privilege/oppression (racist and heteropatriarchal) that give unequal “value” to diverse lives. This brings us back to Marxist feminist thought from decades ago, in which capitalism is a “system of vacant positions”: it gives materiality to inequality in the distribution of resources, time, work, etc., but does not define who occupies different positions.

We are interested in understanding the concrete mechanisms that are used to produce hierarchies and dispossession. Those include the process of disciplining the body for labor, that turns people, as well as nature, into means for accumulation. The same thing happens with private property in general, as well as in its specific dimensions, such as land ownership (disputed with violence) and intellectual property (with all of its implications for health care, knowledge, the patenting of vital processes, etc.). We are also interested in understanding the mechanisms for assigning (exchange) value and price. Understanding them is important because they will appear again in our attempts to initiate alternative circuits for sustaining life.

Under this perspective, the capital-life conflict becomes a problem that is simultaneously common and unequal. It is common, on the one hand, because it implies the destruction of the planet, without which nobody could live. And it is common because it destroys collective life. But it is uneven because the attacks against specific lives are radically unequal: from death as waste to useful deaths to radically uneven levels of precarity.

In political terms, our strategy does not lie in removing the veil so that everyone recognizes that it is capitalism that exploits us. We could appeal to the “working class,” “women,” “the people of the South,” “the people,” or any other collective subject that seems closest for us to summon, but we have to recognize that we must create that political subject and that, to do so, we have to address this conflict in the specific situations in which the unequal way in which the conflict affects us is materialized.

How does global land grabbing affect us in unequal ways? And housing speculation? What do we propose to do with household employment, a work in which the inequalities between women become forcefully apparent? We build political force by giving situated responses to these questions, understanding that food, housing, and care are territories in which that capital-life conflict is expressed that unites and divides us.

The political forms that the conflict takes, especially in these times of the proliferation of extreme right-wing governments, is a fundamental element to take into account. (Global) authoritarianism of the market and corporate power, in diverse territories, such as Brazil, is taking hold, dispensing with even the minimal appearance of democracy. A key element of that project made hegemonic by the extreme right is a market consensus: increasing privatizations, expanding the role of corporations by privatizing state functions and overlapping with their public role, and as reference points for promoting well-being with their corporate hypocrisy. If the extreme right does not explicitly occupy these sites of political power, does that suppose some sort of safeguard against market authoritarianism in a global context of the enclosure of the necessary conditions for life?

The view of free market environmentalism, which turns nature into a service provider that is “conserved” through financialization programs, positing private property rights and civil responsibility as the best tools to preserve the health and sustainability of the environment, demonstrates the complexity of the issue.

[1] In the Spanish original, this subject is referred to with the acronym ‘BBVAh,’ which also corresponds to the Banco Bilbao Vizcaya Argentaria, the multinational financial services corporation, originally founded in Bilbao, emphasizing the link between this white, bourgeois, urban, heterosexual male subject and corporate and financial power.