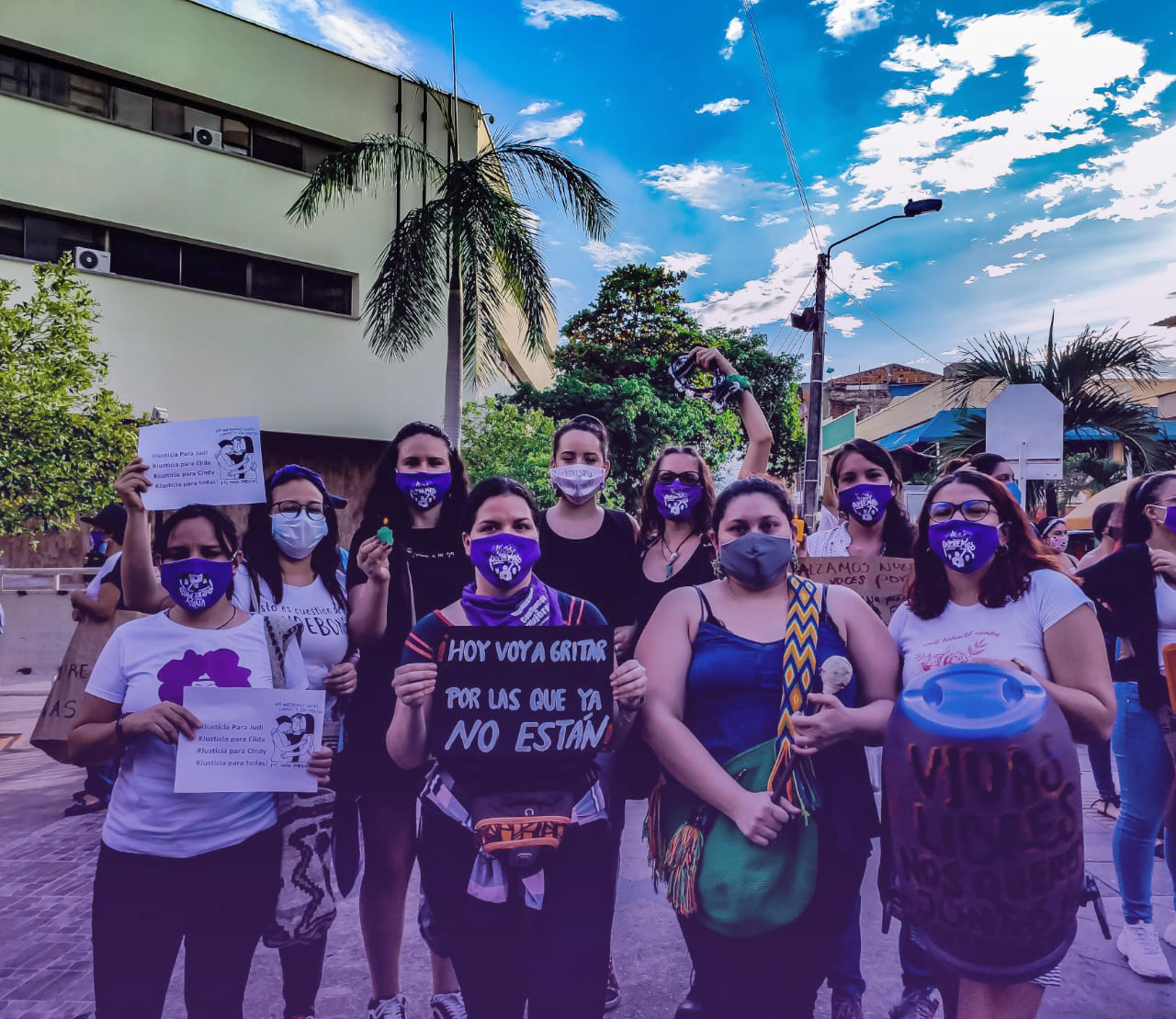 Political Killings, Femicide, Plunder: An Overview on the Situation in Colombia

By Confluence of Women for Public Action

It is a known fact that Colombia has been facing an armed and political conflict for more than 60 years, resulting in a history of violence with around 9 million victims. In 2016, there was a breakthrough in terms of expanding democracy after a Peace Agreement was signed between the former guerrilla group Revolutionary Armed Forces of Colombia–People’s Army (FARC–EP) and the national government under the then president Juan Manuel Santos Calderón. While the agreement is considered an achievement for the political acknowledgement of the struggles of social movements in the country, today Colombia is witnessing a situation characterized by escalating territorial conflicts and the disregard for a lot of the aspects set forth in the Peace Agreement signed in 2016.

After the far-right took on the presidency of the country in 2018, they continued with a policy of violating the agreement and plundering the communities with intense, violent actions across the country. The current Iván Duque administration, along with his party in Congress, has been marked by the continuation of the plunder policy, denying the role of social movements and disregarding protests as a mere tool of armed insurgence, thus failing to respond to the social demands of grassroots movements. Since Duque took office in August 2018 to this day (February 2021), 905 social leaders have been murdered in Colombia. In 2018, there were 298 murders; in 2019, 279; in 2020, 310; and, by February 2021, 18 were killed. Not only that, 566 people were murdered in the 177 massacres that took place in different zones across the country by February 1st, 2021, as well as 212 former FARC fighters were killed.

The armed conflict has been reorganizing through territories since the Peace Agreement was signed, building up strength in areas previously occupied by the FARC. Today, one city may have up to 12 armed groups fighting for drug trafficking routes and markets. One such case is the situation in the Colombian Amazon, where there are conflicts between cartels such as the Sinaloa, which operates in this area, setting off a wave of violence in the territory. Similarly, there are territorial tensions regarding the agricultural expansion for extractivist activities carried out by big corporations that come to these areas and completely change the life of these territories, producing forced displacement, increasing cases of sexual violence against women and girls (something that also increases with the armed conflict), and deepening poverty in the territories where there is little to no State presence.

On the other hand, in the country’s big cities, today’s reality responds to the economic dynamics of capital and the project of the national-international bourgeoisie, adopting a model of overurbanized city (Davis, 2014), with the sudden emergence of informal neighborhoods, resource depletion, privatization of everything that is public, increasing informal employment, and feminization of urban poverty (CEDINS, 2020). All backed and funded by the current administration. Additionally, cities witness conflicts between different armed actors in connection with drug trafficking and paramilitary groups, increasing the number of disappearances especially of young women and girls, expanding the microtrafficking that rules neighborhoods, and deepening extreme poverty.

Adding to this scenario are the multiple social inequalities that have increased (or at least have become more apparent) due to the COVID-19 pandemic across the Colombian territory, and the poor ability and commitment of the current government to tackle the pandemic. While thousands of Colombians and Venezuelan immigrants live under terrible conditions as they are unable to rely on decent work, the Duque administration has injected approximately 9 billion pesos (roughly US$2.5 million) into police forces to amplify a criminal policy that disregards the poor people of the country. It is also noteworthy that, in Colombia, 9.5 million people earn less than a minimum wage, according to the National Administrative Department of Statistics (DANE), with a 50-percent informality rate and the highest unemployment rate in South America, where women are the most affected demographic before and after the pandemic (Semana Magazine, 2021).

About women’s situation, it is important to say that the national emergency regarding femicide has become a reality since 2020, with 568 cases of women and girls murdered in the country, an average of three femicides every two days in 2020, and 10,000 reported cases of domestic violence (Colombia Femicide Observatory). Similarly, the several cases of sexual abuse against indigenous girls by memberes of the National Army of Colombia have sparked a number of demonstrations in different cities across the country. So far in 2021, 35 femicides have been reported. There have also been eight massacres with 29 victims, surpassing last year’s rate, while 18 social leaders and 6 individuals who signed the Peace Agreement have been killed, according to the Institute for Development and Peace Studies (Instituto de Estudios para el Desarrollo y la Paz — INDEPAZ).

Regarding the response from social movements, we must underscore that mobilization efforts continue despite unfavorable conditions. We came to the end of a very difficult year in 2020, but which coalesced important protests in the country’s major cities, such as the case of the indigenous Minga¹ in Southeast Colombia, which was not received by the Iván Duque administration in Bogotá, and the demonstrations of citizens who denounced the State security policy and the continuous violations of human rights spearheaded by the members of the National Police, with a security policy that is generally completely aggressive against the people. This became clear during the protests of September 8th and 9th, 2020, when the crackdown resulted in around 13 people killed, more than 400 injured, and an unknown number of missing persons.

Also important to point out is the momentum that the women’s and feminist movement has been gaining. They started 2021 by declaring national mourning for the femicides and exposing the responsibility of the State and its institutions, which fail to secure the lives of women and girls. Regarding their mobilization, 2021 is expected to be faced with the pandemic crisis and a government with little popular legitimacy. And because this is an election year, grassroots forces and social movements will have to fiercely impose themselves across this country they want and hope to build in the years to come.

¹ Minga is a permanent effort spearheaded by indigenous, peasant, and grassroots communities that hold major demonstrations every two or three years in Colombian territory, which include bringing agricultural activities to a halt and blocking the country’s major roads, as a way to pressure the government for social change.

The Confluence of Women for Public Action (Confluencia de Mujeres para la Acción Pública) is a Colombian effort that brings together organizations and women who strive to change their realities and the realities of their territories with a grassroots, peasant, urban, and diverse expression of feminism.