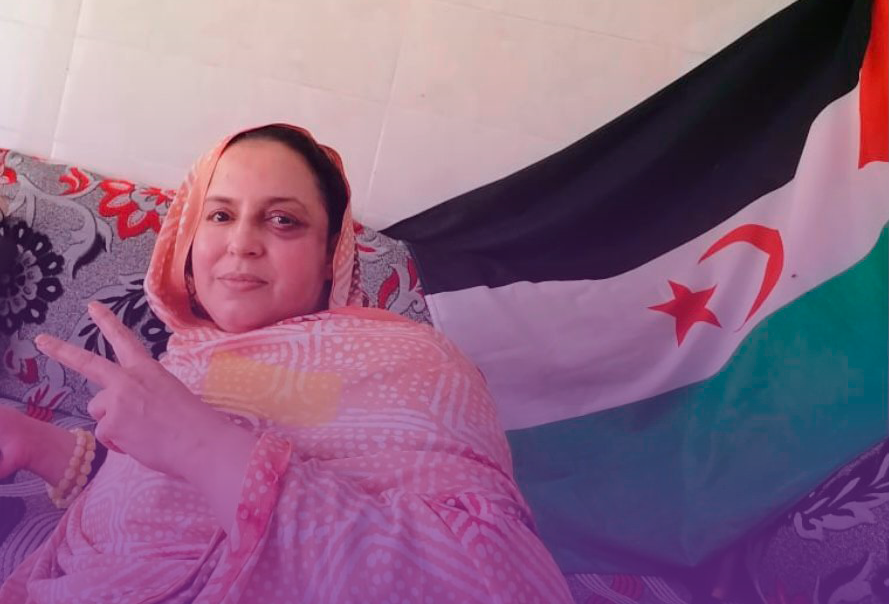 Sultana Khaya: “Despite persecution, Sahrawi women have not stopped demanding freedom and independence”

On this International Day of Solidarity with Sahrawi Women, Sultana Khaya denounces the persecution she has suffered from the Moroccan occupation in Western Sahara

To this day, the lives of women and men living in Western Sahara are crossed by colonialism. From 1884 to 1975, the territory was considered a colony of the Spanish State. In 1975, after the withdrawal of Spain, Western Sahara was occupied by Morocco, and today it is the last colony on the African continent. For decades, the Sahrawi people have claimed their self-determination and sovereignty over their territory, culture, production and ways of life.

The Moroccan occupation of Western Sahara has severe and daily results: human rights violations, political persecution, violence, military territorial control. Faced with this reality, women play a fundamental role in resistance within communities. In 1991, a ceasefire agreement was established between the Moroccan state and the POLISARIO Front (Popular Front for the Liberation of Saguia el Hamra and Rio Oro), and in November 2020 it was broken by the Moroccan army, which invaded the Sahrawi territory to repress protesters.

Since then, the breach of the ceasefire agreement has generated even more conflicts and increased the feeling of unsafety for the Sahrawi people, who resist despite multiple aspects of colonial violence. Activist Sultana Khaya is one of the targets of political persecution. Sultana was brutally raped more than once by the Moroccan authorities, who set up a permanent siege on her home and impede her and her family’s free movement.

On this February 18, the International Day of Solidarity with Sahrawi Women, we publish a special interview with Sultana Khaya for Capire. The activist tells her story of resistance, denounces the violence she has suffered and calls for international feminist solidarity for the freedom of her people. We want this interview to be another tool to strengthen the campaign for Sahrawi self-determination and for the freedom and safety of Sultana Khaya and all women in Western Sahara.

AtCapire, we are paying attention and following your situation with solidarity, through the information sent by our Saharawi companions of the World March of Women. Could we please start the interview by presenting your trajectoryof life and struggle?

First of all, I want to thank Capire and the World March of Women for this opportunity. Through you, I thank all the living awareness around the world.

I started to fight like any Sahrawi person living under occupation, in a climate dominated by repression and crimes against humanity. I got involved in the Sahrawi peaceful resistance when I was a child and still in school.

During my struggle, I was a target of persecution, intimidation and torture. I remember 2007, when the Moroccan occupation forces caused me to lose my right eye during my participation in a peaceful student demonstration at the University of Marrakech. It was a terrible thing.

Now, since November 19, 2020, me, my mother and my sister have been living under siege, under house arrest, which comes with violence, torture and rape, with my sister and my mother. All this under a terrible silence from the UN [United Nations].

Since that moment in 2020, have the Moroccan authorities’ attacks and violence against you increased? How has this violence impacted your life and the lives of those around you? And what does this systematic violation of human rights represent for the Sahrawi people?

In November 2020, I was a victim of violence by the Moroccan occupation forces shortly after my return from Spain. The attacks have continued since then and have increased and my family members and all the people who have tried to visit me or express solidarity with me have not been spared.

In January 2021, I almost lost my left eye, hit with a stone thrown by a Moroccan delegate. After that, my family’s house has been attacked several times. The walls were smeared with fetid products, a part of our belongings was stolen, and the rest was destroyed. These attacks took place very late at night, with violence and torture. My mother, who was 84 years old, was not spared. Me and my sister were raped several times.

These shameful practices of the Moroccan state continue to this day and are a systematic policy against the Sahrawi people in the occupied territories of Western Sahara, and in the presence of the United Nations Mission for the Referendum in Western Sahara (MINURSO). This clearly represents the ongoing violations of the rights of the Sahrawi people, with the complicity of the international community.

What is the relationship between colonialism and patriarchy in Western Sahara? How does this materialize in the persecution that is going on against you?

The relationship between occupation and patriarchy is manifested in the ongoing military operations and violations of freedom, especially against Sahrawi women. Personally, my mother, my sister and I experience this daily persecution by the men who represent the repressive machine of the Moroccan state.

And what is the role of women in the resistance against this relationship between colonialism and patriarchy and in the construction of self-determination of the people?

Despite this persecution and the shameful practices of the Moroccan state, represented in the suppression of freedom, in violence, torture and rape, as well as kidnappings and arbitrary arrests, Sahrawi women continue to peacefully resist in the occupied territories, demanding the Sahrawi people’s right to freedom and independence. We do this by organizing peaceful demonstrations, educating the younger generations, preserving national identity and rejecting the occupation.

The Sahrawi people have won the sympathy of people who are aware and progressive and democratic forces around the world through our just cause and our legitimate struggle for the right to freedom and independence. February 18, the International Day of Solidarity with Sahrawi Women, continues to be an opportunity for women’s movements and grassroots movements around the world to express their solidarity with the struggle of Sahrawi women for freedom and independence. Personally, I wish that all women in the world would expose the failures of the UN and its mechanisms and the International Red Cross, for not fulfilling their role in protecting Sahrawi civilians – especially women and children in the occupied areas of Western Sahara – from the crimes committed by the Moroccan state, which are crimes against humanity.