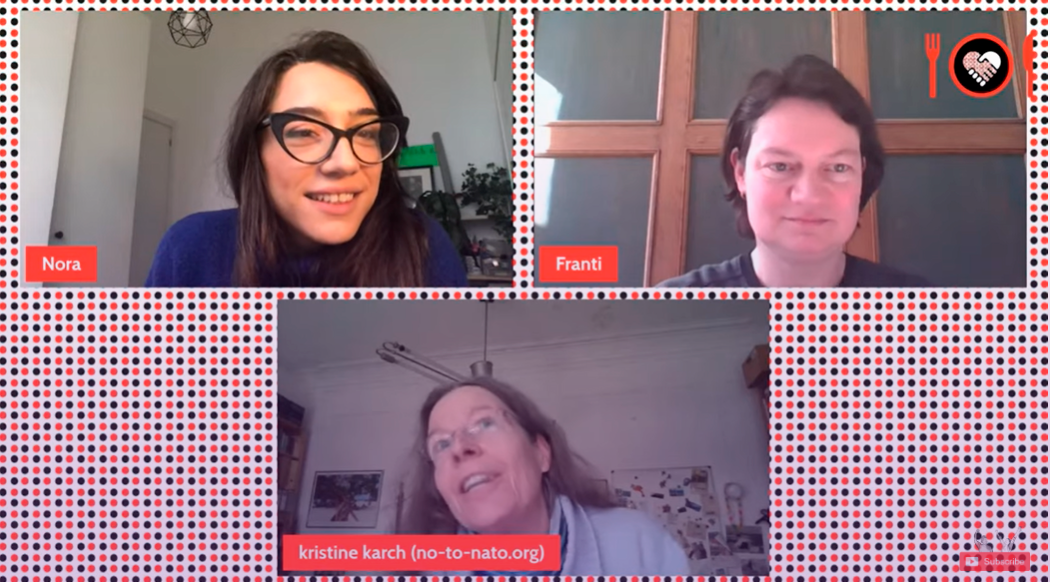 “Weapons are not tools for peace”: feminists against wars and NATO

On the way to the Peace Summit against NATO, women build a feminist agenda to end the war and towards peace

War and militarism are gears of the exploitation and oppression system in which we live. They destroy communities, unbalance economies and ways of life, block peoples’ sovereignty and freedom. For decades, the feminist movement has been denouncing the impacts of war on women’s lives and its strong connection with the patriarchy, capitalism, and racism. Feminists are alert to OTAN’s imperialist moves and its pursuit of controlling peoples and territories around the world. They say “no” to the war on Ukraine and also to wars, sanctions and occupations in Palestine, Yemen, Western Sahara and other territories.

On the processes and accumulations for the Peace Summit that happens this June in Madrid, the sixth episode of Eat NATO for Breakfast, a weekly show from People’s Dispatch, discussed about the feminist agenda towards peace. The conversation happened between Kristine Karch, from the Women Against NATO movement, and Nora García and Franziska Kleiner, from the International Peoples’ Assembly (IPA).

“Woman pushing the nuclear button is not feminism”

During the conversation, Kristine explained how the United Nations Security Council resolution 1325, established in the year 2000, for the first time recognized women as immediate victims of war and violence, and also acknowledged them as actors in society. Its goal was to give women the possibility to take part in all the negotiations in conflict situations. NATO then implemented this resolution and used it to fasten the militarization of society. “They included women on their dirty job to kill people. We must keep this UN Security resolution out of NATO”, she said.

“In liberal feminism there’s an idea that you can make women visible by creating jobs at the top as if this would somehow change things”, added Franziska Kleiner. Actually, NATO is looking for a women to replace its current secretary-general, Jens Stoltenberg, with a strategy of appropriation of feminists discourses. This means that a woman could occupy this highest political office of the world’s leading military alliance. For Franziska, “some people would see this proposal as an advance, but of course it is just a whitewashing. It gives a progressive modern image while maintaining the same dynamics of control and  destruction. Women at the helm of NATO will not save us”.

Because of the consensus-building that is being held by the corporate media in the entire West, a big concern is that, with the unfolding of the Ukrainian war, NATO would be reinforced and supported. To fight patriarchy and war, Nora García defended that the movements must “promote an international peace process that dismantles NATO and abolishes nuclear weapons”.

A feminist agenda for peace

Women have been building a collective response, a common feminist agenda for peace to struggle against the advance of the militarization of their bodies and territories all over the world. Militarized processes of conflict resolution often see the impacts on women’s lives as “collateral damage” or “acceptable loss”. Women denounce the violence they suffer from being used as spoils of war, being raped, kidnapped, and murdered, and enduring the consequences of war sanctions.

In 2010, while building its Third International Action, the World March of Women presented a vision about it on its line of action on peace and demilitarization: “rape is used to humiliate, dishonor, and demoralize the enemy, for military propaganda or – as has recently been the case – as an ethnic cleansing policy (for example in Bosnia-Herzegovina during the war in ex Yugoslavia), as an act of genocide in Rwanda, as an instrument of political terrorism in Haiti, or as a symbol of victory.

Increase on the number of arms in circulation, state and domestic violence, denial of fundamental freedoms and persecution of leaderships, food restriction, shelter and displacement: these are a few of the results of war on women’s actual lives. That’s why feminism feels with meaning, strategy and political articulation an active agenda that defends the marginalized and propose a reorganization of the economy and the societies, based on freedom, equality and self-determination.

In the midst of wars, access to education stops, health security is put at risk, common goods become scarce and the war industries profit in a wide range of sectors. On the war in Ukraine, the newest sanctions applied by the US and Switzerland, allied with the European Union, are related to the energy sector and to financial transactions made not only by companies, but also by the population. “Sanctions are tools to maintain imperialist power during war”, explained Franziska. These economic sanctions have a huge impact on the lives of women who are at the front of the carework, highly needed in such times.

For Nora, in times of war, women are the “life jacket of daily life. On our back is the reproduction of life”.

Because of the role women play to sustain life, feminist struggles for peace put the needs and well-being of the people at the center. For Franziska, this feminist struggles “fight to ensure dignified life, instead of market profits and the rise of hatred and intolerance in the extreme right”. This feminist perspective on the solution of conflicts have to “overcome a society based on capitalism, racism and militarism with values like rivalry, competition and extreme individualism”, defended Kristine.

“We need to create our own frame as feminists to explain important elements that now are in dispute. War is not peace. Militarism cannot prevent war. Militarized solidarity is a contradiction in itself. War and destruction is not inevitable”, said Nora.

According to Kristine, “it’s important to not only speak about equality, but also to speak about justice”. Based in justice, a feminist approach of building peace and security happens through cooperation and not confrontation, and it has to respect the sovereignty of the people. “Peace is by no means a default setting in capitalism, and pacifism is not simply a matter of staying calm, it is indeed hard work”, explained Franziska. On this matter, once again it is worth quoting the World March of Women’s 2010 manifesto: “we call for demilitarization and we believe that a culture of peace goes beyond that of a mere absence of war. We fight for the rights of women in conflict areas, for the end of the use of rape and slavery as instruments of war, and we protest against the impunity of aggressors, States and groups. Our actions against war and militarization likewise demand the inclusion of women in peace negotiation processes and advocate civil disobedience as a reaction to aggression”.

The struggle for peace is by all means an anti-imperialist struggle, a struggle for feminism and for social transformation everywhere. For more on “Eat NATO For Breakfast”, visit Peoples Dispatch. Capire will keep following and sharing content on the preparation process for the Peace Summit “No to NATO”.