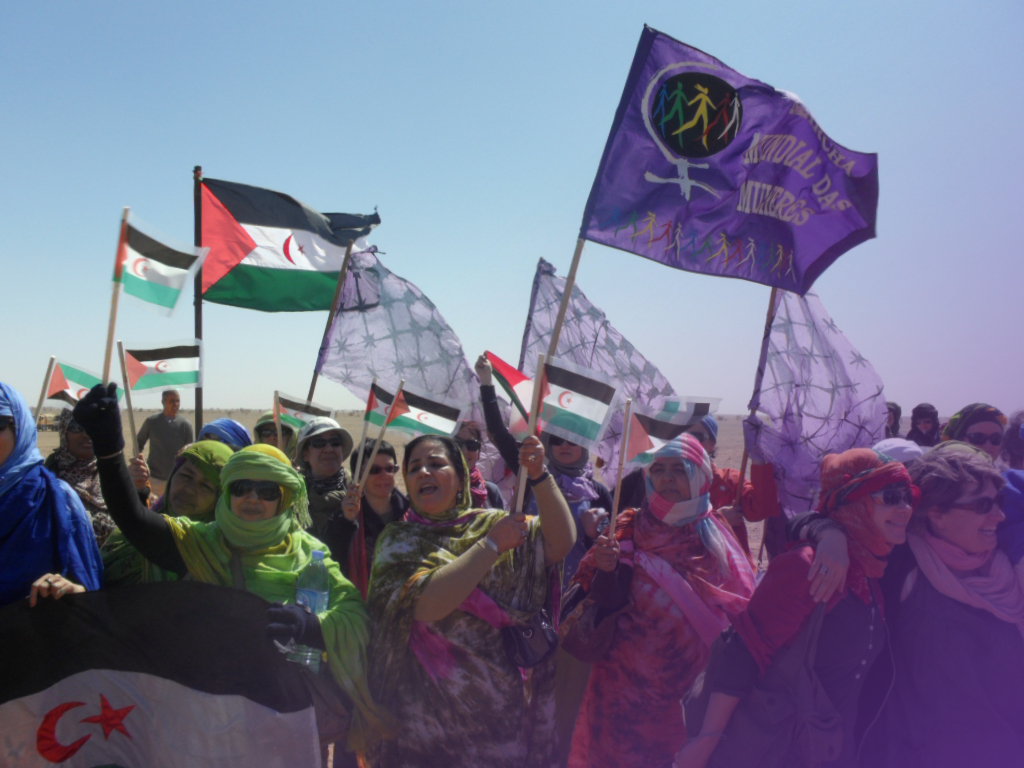 Western Sahara, located in the Maghreb region of North and West Africa, is Africa’s last colony. Women have a bigger responsibility to carry on, to handle, and to change what happens here.

Our organizations are the proof of how we can educate and understand the abilities of all Sahara women, politically and culturally; and also work to create free space for them where they could express their own voice. Here, in Western Sahara, the women have no name, but they have a dream, and we are working to create the free space they need.

That’s why we are working to establish alliance relations between our movement and other organizations, locally, continentally and internationally. We are giving our maximum effort to raise more awareness about the cause of Western Sahara, and about the struggle of the Sahara women who are working to get back to their free country.

Saharaui women are systematically marginalized. More than half of the population are obliged to flee from their own country to settle in exile, where there’s no normal life, the life we are used to, and no economic possibilities to sustain ourselves. And even though they have all this responsibility to carry, women also take care of people, nature, and communities, and fight the feminist struggles around the world. Collaboration is the way to make a change, make a difference in every step we take.

Saharaui women have no jobs because the companies who operate in our occupied territory employ Moroccans instead of our people, even when they are using Western Sahara’s resources. This is definitely a big challenge for us, but, at the same time, we are trying to set a different basic pillar to put an end to all the exploitation of human and also natural resources.

Because there is no work, we try to find alternative solutions to secure a sustainable future for every woman. But we still have a lot of work to do to make women stronger, changing  the center of power and authority. Women are the ones who sustain the life that is worth defending, and that’s why we are so capable of promoting big social transformations.

We struggle against Morrocan occupation, and also against the presence of transnational corporations that reinforce colonialism. There are lots of western companies working in Western Sahara, while there are very qualified Africans to do everything. This is a radical question for Western Sahara, but it is more extensive too. We have good workers in so many areas, so why do we still see ourselves as the weakest links when it comes to Africa? Africa has education and natural resources, but we still rely on foreign countries like China and Korea.

Westerns and transnational corporations don’t love Africa, but they love the wealth of our continent and they are profiting from us. We, the people, need to be the main beneficiaries of our own continent. I guess that we have to put an end to this disease in our territories and make the world that we deserve to live in right here.

The struggle of every woman in Africa and around the world is the struggle of the Saharaui women. I believe that we will have progress if we put it in mind that it doesn’t matter if we have different backgrounds or nationalities, there’s something that we always need to ask as women, which is to create, collectively, a good place to live in. So let’s work together for the virtuous, equal, and peaceful world that we all deserve to live in.

Najat Khaya is the International Officer of the National Union of Saharawi Women and a member of the World March of Women.