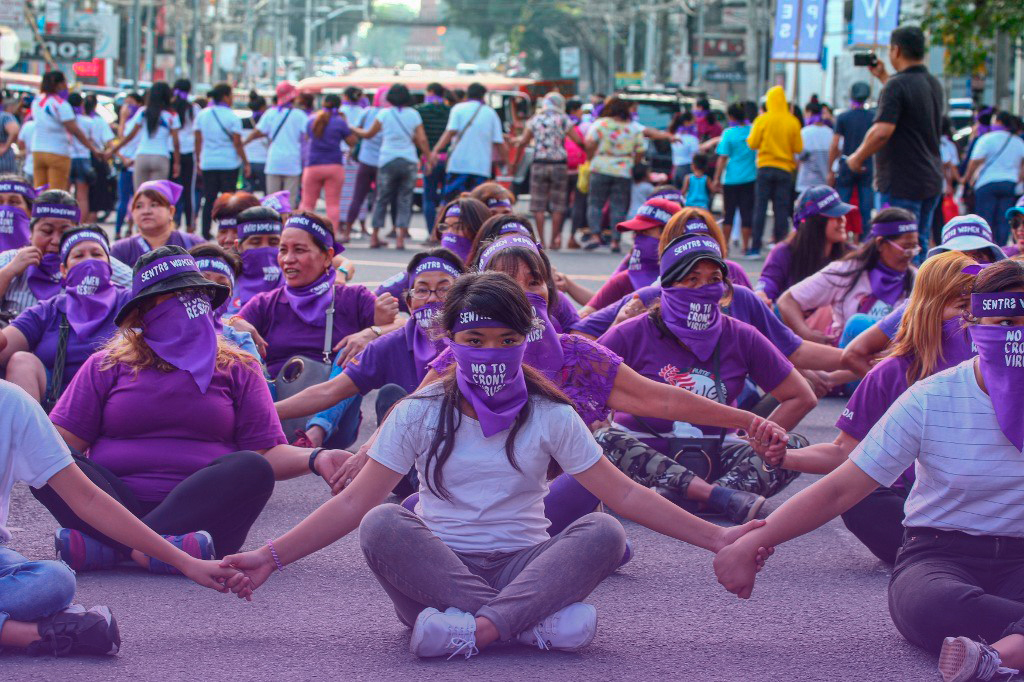 Read and listen to Jean Enriquez speech during the “Feminist struggles to bring down authoritarianism” webinar.

On our discussion of the feminist struggles against authoritarianism in the Philippines, social movements have been coming together to discuss the context and also our strategies to face the extension of the Duterte dynasty in the upcoming elections. His daughter, Sara Duterte-Carpio, is now running, which presents danger for us, feminists, because she’s likely to be packaged as a progressive female candidate.

We have to remind ourselves of the current context for women and for the various basic sectors where women are as well. We already know that Duterte’s administration violated women’s rights not only through remarks, but also through policies of oppression of farmers, workers, urban poor, indigenous peoples, and other marginalized sectors. Duterte’s administration institutionalized a patriarchal, autocratic, militarist and criminally neglectful governance with no accountability to the people. The police continues to kill, and women are primarily target also as sex objects and commodities.

Our organization has cases of women who have been raped by the police. Women have been sexually exploited in exchange for crossing lockdown borders. Especially since women have been hoping to gain livelihood during the lockdown and the pandemic. Before crossing the lockdown borders, they are raped by the police. There are also the aggravating harms brought about by extra-judicial killings, which is another form of violence against women. Duterte’s war on drugs mobilized the police in urban poor communities and more than 20,000 have been killed. Duterte’s ineffectual health governance has also aggravated women’s healthcare burden and exposed them to greater risks.

There are laws that legitimize forced eviction and demolition of poor communities. Since March 2020, at the height of the pandemic, demolition of houses beset communities. 120 families were forcibly removed from their neighborhood in Pasay in March. In July of the same year, in another province called Laguna, 300 families had their houses demolished. In September, 800 families were evicted to give space to local government projects.

Besides that, Indigenous communities are victims of repression, abuse and violence brought by the militarized war on drugs, the war against the pandemic, and the war against poverty. Duterte calls the aggressive infrastructure building policy as ‘Build, Build, Build’. It’s a track of economic growth that has violated and abused the rights of Indigenous peoples. The laws implemented under his administration effectively harassed and killed Indigenous leaders who decided to resist development aggression brought by mining, plantations, dams, energy projects, land conversion, and others.

Indigenous peoples have been targeted as terrorists. These attacks caused a chilling effect to resist, especially in the rural areas. The Cordillera Peoples Alliance (CPA) has recorded 76 indigenous leaders as victims of extrajudicial killings. The government commission on indigenous peoples has failed to perform its mandate and to represent their interests, particularly in the Cordillera, in the island groups and in the Muslim religion. The same commission has become the spokesperson of Duterte’s government against Indigenous peoples.

Young women face specific challenges. The online classes and the need for employment in the face of hunger have forced young people to leave communities and fall victim to human trafficking. Meanwhile, women, still in the stereotypical role of nurturers of the family and community, confront health problems and restrictions brought by destructive extracting projects and by the pandemic.

The working class are suffering from the climate of impunity. The trade union killings, terrorist-tagging,  and criminalization of trade unionists and other forms of union-busting make illusory any claim of freedom of association in the Philippines. No wonder, the country has been considered to be one of the top 10 worst countries for the working class, according to the Global Rights Index, an annual report of the International Trade Union Confederation (ITUC). The Duterte regime has failed the working people in terms of ending contractualization.

Workers are faced with more brutal forms of work arrangements where employers are able to completely pass on to them the risks that they used to take on, from providing the needed equipment to do the job, to cover social protection. Like other sectors, workers have been largely left to fend for themselves during the pandemic. It’s particularly harder for the migrants (called Overseas Filipino Workers), for whom the government has no alternative. They have been forced to come home from abroad.

Farmers face similar problems, such as terrorist-tagging, and their land is converted and taken away from them. Because of international trade agreements within the World Trade Organization, there has been a flood of imported rice and other food products that cause a massive loss of income for local food producers, who are mostly women.

We have been talking about strategies in the media given the electoral campaigns that are happening in the Philippines. In the immediate, we push for: adequate economic subsidies, especially for the most marginalized such as the survivors of gender-based violence, persons with disability, the LGBT, Indigenous, Muslims and others; to take into consideration women’s distinct health needs such as sexual and reproductive health; to make president Duterte and his government accountable for violations of human rights; to ensure comprehensive survivor-centered programs for all victims-survivors of violence, including ensuring economic programs.

We are also pushing for the scrapping of the anti-terrorism act legislated last year that endangers women human rights defenders. We want to ensure women’s rights laws that we pushed for work for women and to support jobs and adequate livelihood during the pandemic. For the Indigenous communities, we want a governance that recognizes self-determination and a development that is fit to the needs of the people and not of corporations, one that cares for nature and the environment.

We want a government with human, inclusive and equitable social protection policy to ensure that Indigenous communities and everyone within it, including women and young people, live with dignity. Education, health and livelihood should be supported because, without these, Indigenous peoples’ capacities to contribute are affected or weakened.

There are pushes for law changes and to protect the exercise of the workers’ rights to self-organization. We must fight to end all forms of discrimination, sexual harassment and outright sexual assault against women workers. We want the end of all forms of contractualization and also to ensure that our legislative bodies provide sufficient aid to formal and informal workers.

The neoliberal systems in society deepened the despair and dissatisfaction among the people. Far-right forces took advantage of such dissatisfaction and appropriated the language of progressive movements with populist governments presenting themselves as alternatives. Corporate capitalism gained from the killings and the massive repression of resistance across social movements. China is rising with its indirect contributions to Duterte’s administration. The Chinese and Philippine-based capitalists continue to fund Duterte’s upcoming elections, including social media troll farms that are creating a chilling effect also among young people.

Even under the Biden Administration, the United States has been cementing its relationship with Duterte by negotiating the stay of the military agreement for the visiting forces in the Philippines. We have been resisting and filing cases against Duterte’s administration. We won in the Commission on Human Rights, but the president has immunity as we know. We continue to pursue cases to the International Criminal Court. Our case was not just about killings, but also the rape of women by the state forces authorized by Duterte.

We continue to rebuild solidarity in the communities. The women have been organizing community pantries with organic products and distributing food among the people. Among the widows and the orphans of extrajudicial killing, we conducted Tit for Tat, for communication. We are pursuing and charging every violation that Duterte and his leaders commit. We also continue to grow our alliances across women’s groups and to go to the streets expressing women’s resistance!

Jean Enriquez is a member of the World March of Women in the Philippines and the coordinator of  The Coalition Against Trafficking in Women.