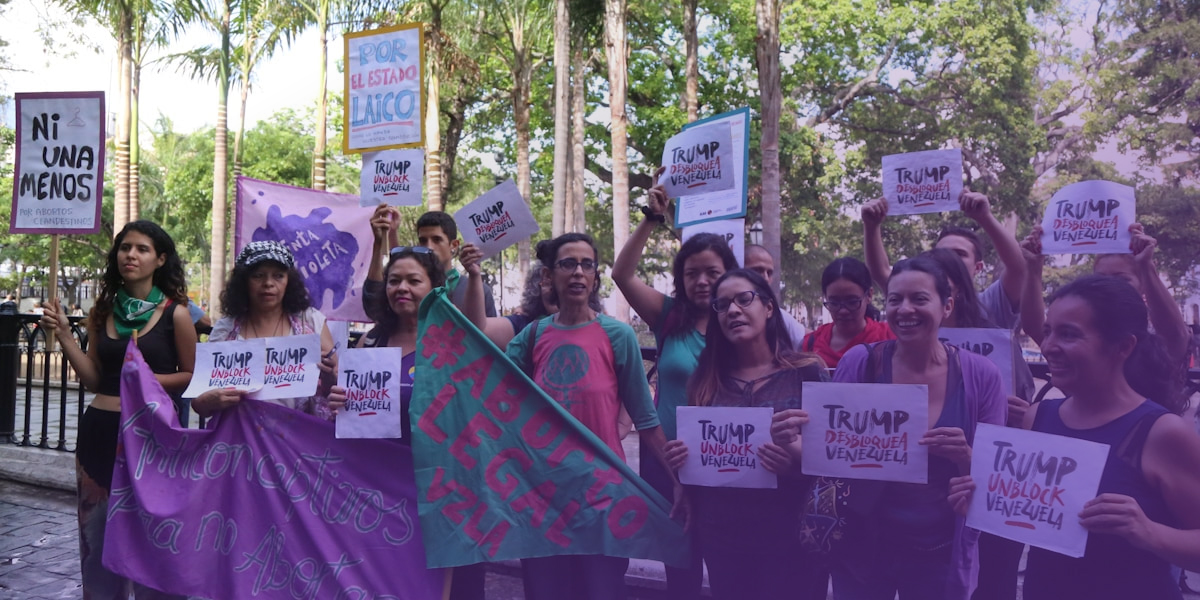 The Country of the Impossible: People’s Organization Against the Blockade of Venezuela

I don’t think we have every problem figured out in our revolution, nor have I decided to overlook our contradictions and deviations. But I do believe we have every right to dream and create our own history, to make our own decisions, and make our own mistakes. In other words, we have the right, like every people in the world, to be sovereign and free.

The Venezuelan people’s sovereign decision to try alternatives to the bourgeois democracy and try other forms of organizing our economy, government, and society structures has been targeted by the North American empire since the beginning of the revolution. Let us not forget the 2002 coup attempt. Since 2014, the United States government has decided to escalate from a low or medium international pressure and declared war. War is what defines the unilateral sanctions and the blockade affecting our trade, finance, and more and more our sea and airspace—an unconventional warfare, but a war nonetheless. Venezuela is a country besieged by the United States empire and its allies: Canada, the European Union, Switzerland, and Latin American governments such as Colombia and Brazil, which undoubtedly betray the sentiments of their people.

What Does Caring Mean in a Besieged Country?
It means explaining to a child what they should do “if.” If someday bombs fall, if eventually they invade… It also means having to tell them every mealtime that “that’s all we have”—or worse, having to tell them, “we don’t have anything to eat.”

The blockade, unilateral sanctions, and coercive measures aim to break us by imposing hunger upon us and telling the world that you can’t set alternatives in motion. But they are wrong about Venezuela. For nearly six years, Venezuelan men and women have been subjected to imperialist harassment, impacting, among others, our healthcare system, which is now facing serious problems to provide healthcare to everyone. This is what happened, for example, with the Barrio Adentro [Into the Neighbourhood] program, created in the revolution and which, until recently, provided free, unlimited medical exams, medications, and care. Pharmaceutical corporations (most of which are based in the United States and the European Union) obey North American laws on extraterritorial sanctions. And if the pharmaceutical companies don’t obey them, the financial system will.

Looking back not too long ago, in March 2020, after the World Health Organization declared the pandemic, private banks in the United States, Europe, and Asia blocked Venezuelan government accounts with total balances of seven billion euros that were supposed to be used to buy medical supplies to tackle the pandemic. This episode shows that quarantining means nothing to imperialism.

While we may be able to overcome commercial and financial obstacles, we still have to face blockades against ports, airports, and shipping companies. Our latest experience with the sea blockade affected Iranian vessels that were carrying fuel and other chemicals necessary for the oil refining process. They were forced to take a longer, more dangerous route around the blockade, and faced a military threat through their entire journey. The first of these vessels eventually was able to make port in Venezuela in September.

What does it mean for Venezuela if that fuel and those chemicals don’t make it to refineries? The transportation of people, food, and other products is mostly made by land. This means that peasants are not able to move their produce to the city, harming rural workers and leading to shortages. We could go on and on for hours about how the blockade and sanctions affect healthcare, education, food production and distribution, international trade, as well as the industry and the ability to provide services such as electricity and water supply, because it blocks the country’s ability to buy parts and resources for their maintenance.

In this context, women face the heaviest demands, both at home and in the community. Because of a “social order,” we are in charge of the care and essential work to foster the well-being of our families. This responsibility is projected for the sustainability of life in communities. Since the beginning of the revolution, women are called to take part in structures such as water monitoring associations [the so-called technical roundtables for water problems], healthcare committees, community councils, and supply and production committees.

Women Organize Alternatives
We are convinced that women are essential to the struggle against imperialism, not only resisting attacks, but also making the alternatives to build our independence and freedom come true. Here is how we demonstrate this: against the blockade of healthcare corporations, we bring together our knowledge of medicinal herbs and grow them in communities. Against the sanction-induced shortages, we meet in supply committees and strengthen alliances between rural and urban areas, ensuring direct food distribution. Against the cornmeal shortage, we resort to our grandmothers and start making our arepas again, avoiding the extortion of private businesses.

People occasionally ask me how, twenty years into the revolution, we haven’t been able to solve our issue of being import-dependent. The truth is, in order to reverse the tangled mess of dependencies that the capitalist system has created over the course of five centuries, twenty years is not a lot of time. Capitalism and its transnational powers have imposed a relationship of dependency to peoples of the entire world. These methods are not new. We have blatantly struggled in Latin America, especially the people of Nicaragua, Cuba, and Venezuela. Around the world, every people who dares to think differently or experiment with different models is faced with a constant threat. Imperialism does not forgive our “bad example.” And our “bad example” means that this territory (which the gringos had decided to call their backyard) has risen up.

Despite the economic warfare, the internationally-funded political violence, the coup attempts, the episodes of sabotage against our power grids, and the uncertainty caused by the shortage of food, medicine, and fuel, people in Venezuela are still going to school, planting more than ever, conceiving cities that grow their own food, and thinking about communes, forms of self-government, and modes of production, distribution, and consumption for life.

We struggle so that women have the right to control their own bodies, to depatriarchalize society, and to fight racism and colonialism—a corrupt legacy of centuries of imperialist subjection. Every day, this people of rebel Black, barefoot Indigenous, and Mestizx men and women shows that we are capable of resolving our contradictions and mistakes, and that we are an excellent “bad example.”

This article is an edited version of the speech delivered by comrade Alejandra Laprea, of the Venezuelan chapter of the World March of Women, during the online seminar Anti-Imperialist Feminist Struggles Against Militarization, War, and Sanctions held during the International Week of Anti-Imperialist Struggle, which took place in October 5–10.

Translated from Spanish by Aline Scátola