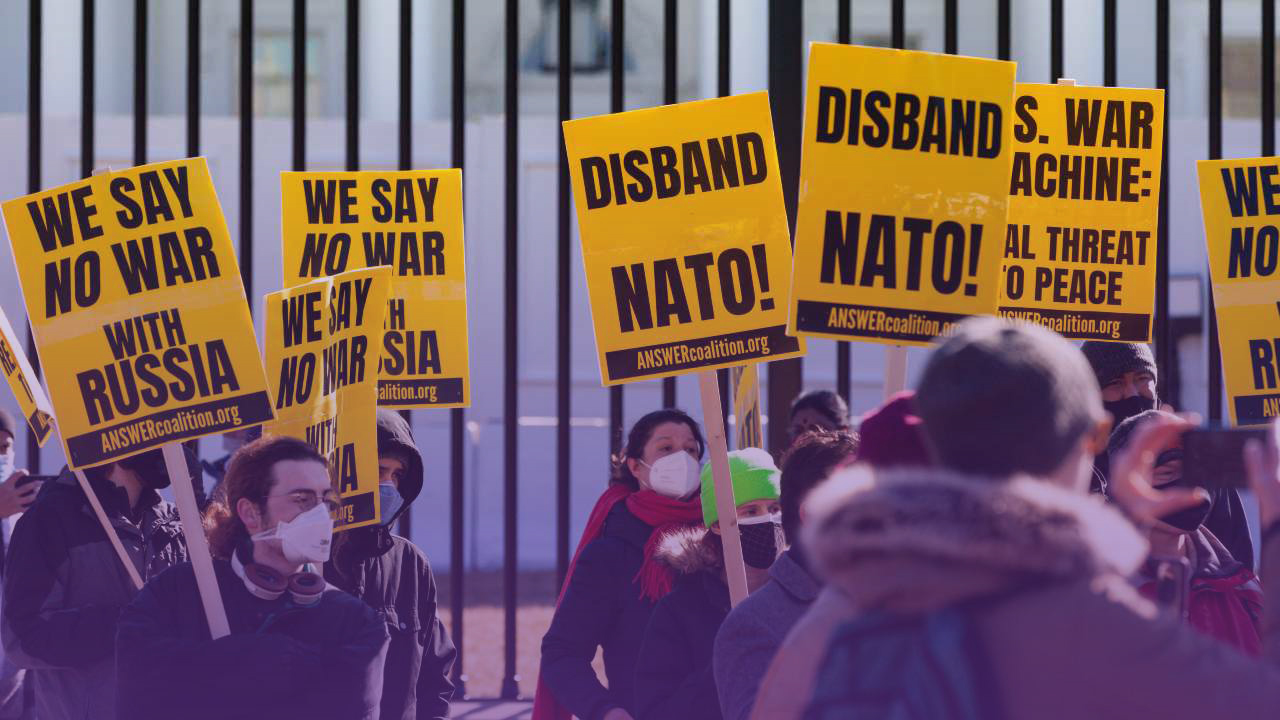 Communicate to end war and imperialism

At BreakThrough News, we have focused our coverage on trying to present the context of how the world got here. It includes a critical assessment of the United States and NATO in helping to set the stage for a war that even senior US officials over the last 30 years warned could take place should NATO expansion continue.

This includes the American diplomat George Kennan, who wrote in 1997 that “expanding NATO would be the most fateful error of American policy in the entire post-cold-war era” because it would “inflame the nationalistic, anti-Western and militaristic tendencies in Russian opinion.” That same year President Joe Biden, then a senator, explained that expanding NATO to the Baltic states would provoke a “vigorous and hostile” Russian reaction. Another warning came in 2008 from current CIA director William Burns who wrote in a cable from Moscow during his time as US ambassador that “NATO enlargement, particularly to Ukraine, (…) could potentially split the country in two, leading to violence or even, some claim, civil war, which would force Russia to decide whether to intervene.”

Now that the warnings have come to fruition, the media is totally erasing the NATO and US role in pushing Russia into a corner.

The capitalist media in the west has gone into overdrive manufacturing consent for dangerous escalation. Not even two weeks into the invasion, some 3/4s of Americans said they would support a no fly zone in Ukraine, obviously not knowing that the consequences of that could be nuclear armageddon.

Meanwhile the west has banned RT channel and other Russian media, in a shocking display of censorship. The fact they were able to implement the bans so quickly on the internet shows that the infrastructure to shut down opposing views was already in place – and, at some point, will probably be used against people like us who oppose war. It makes you wonder if this is one of the “Western values” they claim to be fighting for by arming the Ukrainians.

Now, we are only getting one side of the story, which glorifies the Ukrainian narrative as pure and true while shutting down the Russian perspective and any dissenting view points.

The role of imperialism

This drive for war with Russia has created a frightening climate of racism, censorship and militarism. It is much like after September 11, 2001: those of us who question it, oppose escalation or call for the dissolution of NATO are branded as “treasonous” and “Putin apologists” who need to be shunned and censored.

Meanwhile, the Biden administration is funding an insurgency. They have even discussed plans for preparing the groundwork for Zelensky to lead a government in exile based in Poland, from where the Ukrainian insurgency will be organized, armed and trained. Hillary Clinton was on MSNBC channel laying out how the mujahideen in Afghanistan[1] is the model for Ukraine.

What United States do isn’t about helping Ukrainians, but about bleeding the Russians, fighting the Russians to the last Ukrainian. Funding and arming an insurgency guarantees that bloodshed in Ukraine will continue for years. And just like with the “unintended consequences” from the Mujahideen insurgency, as Hillary Clinton called it, meaning the seeding of the precursor to al Qaeda which later carried out 9/11, there is a similar danger of unintended consequences in Ukraine, one the hegemonic media is already downplaying.

This is perhaps the second most alarming aspect of this war, empowering the global far right. Thousands of  foreign fighters have flocked to Ukraine with the encouragement of western governments and the facilitation of the Ukrainian leadership under Zelensky. We know that the US has already been arming neo-nazi elements in Ukraine since 2014. They are the most ideologically motivated and one of the strongest forces on the ground. And we know that far right ideologues from the US and Europe have already spent time training with these people in Ukraine.

You can only imagine how many of the foreign fighters traveling there are motivated by this white nationalist ideology. And while Russia may have exaggerated the power of these people in the Ukrainian government, the US and its media stenographers are downplaying and whitewashing it.

The hypocrisy of all this is astounding

We can’t let them forget that they are starving Yemen, occupying Syria and militarizing Africa while sanctioning a third of the world. Reminding people of this is not “whataboutism,” it’s essential to understanding imperialism and how their support for more war in Ukraine is a part of imperialism.

Speaking of sanctions, the West is collectively punishing 144 million Russians for the actions of their leaders. Can you imagine if Americans were subjected to economic hardship every time this government invaded a country? This people would all be starving. Yet we have leaders openly admitting they are intentionally trying to destroy the Russian economy so people will rise up and overthrow Putin, something which has never worked but is also a form of collective punishment. US secretary of state Antony Blinken actually said that “this isn’t the Russian people’s war” but “the Russian people will suffer the consequences of their leaders’ choices.” People like US senator Lindsay Graham have openly demanded the assassination of Putin. That may sound outlandish, but it’s meant to move the goalposts of acceptable discourse further and further to the right.

We have been saturated with western analysts telling us how to think. Even the critical leftist voices have largely been western. At BreakThrough News we have challenged that framework by hosting voices from the Global South who offer a much different perspective on this war. It is based in an understanding of imperialism and a frightening reality of how Western sanctions on Russia are going to impact developing countries that depend on Russia and Ukraine for raw commodities like wheat. This might be a European war but its consequences are global.

It’s not the only war

The news is laser focused on Ukraine, but Ukraine isn’t the only horrible thing happening in the world. Afghanistan is being starved due to American policies, Yemen is still being bombed and besieged. Syria, Cuba, Iran and Venezuela are still be sanctioned. Our climate is changing faster and more dangerously than ever. Covid-19 has been forgotten about. The unjust and polarized system which keeps a fraction of mankind enriched and privileged while the majority struggle for their daily subsistence remains in place. But the victims of these wars not only fail to have blonde hair and blue eyes. Their suffering is the result of imperialism, so it’s ignored.

It’s up to us to push back against this insane drive to war, especially because there is a major geopolitical shift taking place. The US is becoming weaker and the unipolar world we’ve lived in for the last 30 years is nearing its end. Which is why the US is lashing out like this: it’s all an attempt to maintain control over Europe specifically and the world more generally.

But the multipolarity we are heading for is totally unmanaged, chaotic and lacks a coherent ideology. That’s why it’s up to people like us to offer a proper analysis and a socialist understanding of what’s happening and why and where we go from here. It’s not going to be easy. We’re going to be isolated and attacked, that’s already happening. They’ll call us Kremlin apologists, Russian propagandists, supporters of war crimes. But we can’t let the war hawks who apparently want to start World War 3 bully us into silence. We have to continue to inform people about how we got here, how NATO and the West are making it worse, and why.

[1] The Afhgan mujahideen were armed Islamist groups positioned against the Soviet Union and the government of the Afghanistan.

Rania Khalek is a Middle East-based journalist for Breakthrough News. This article is an edition of her speech on Capire’s dialogue activity “Women Confront The Wars”, held on March 28, 2022.