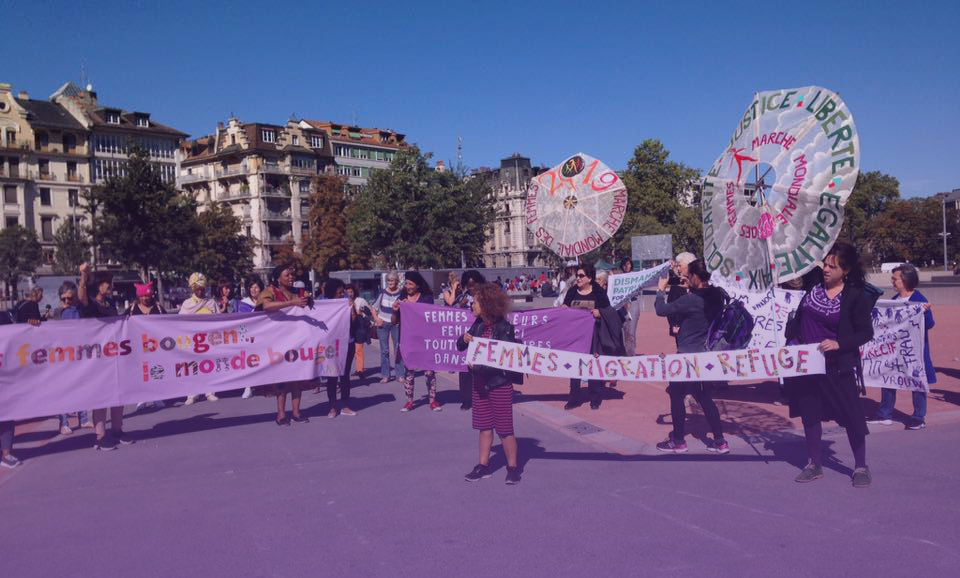 Feminist Solidarity to Migrants and Refugees in Europe

Read and listen to the contribution of Marianne Ebel, member of the World March of Women Switzerland, in the “Migration and Refuge on the Feminist Agenda” webinar.

As activists in Switzerland, the matter of migration has always been a concern for us, since migrants represent about a third of the population in our country. Many members of the World March of Women in Switzerland are migrants. We are also worried with such issue — and maybe above all — because xenophobia, racism and exclusion are the very basis of our laws.

The official position of Switzerland has become stricter in what refers to migrants since the end of the 1980s. And the same process is happening now across Europe. The border closure policy of European countries turns borders and migration routes into extremely dangerous places. In 2014, since the suppression of the possibility of seeking asylum in the embassies – which used to allow people to come to Switzerland or Europe by plane –, more than 20 thousand refugees, men, women, and children, have drowned in the Mediterranean. With the coronavirus pandemic, health catastrophes have increased and violence in refugee camps are many times extreme.

Droit de Rester [Right to Stay] is a refugee-assistance organization with the purpose of hear, support, and accompany both adults and minors who often arrive to the country by themselves. This field work reveals the strength and bravery of these people who seek asylum in Switzerland. But we notice that many of them are hurt, wounded, as a consequence of the extreme violence they suffered not only in their countries of origin, but also along the way to exile, on the sea and in the refugee camps.

Today, managing to arrive to Switzerland or Europe is almost a miracle, but, once here, hardships go on. Except for tourism, entering and staying in Switzerland is often prohibited to all non-European citizens. Only Europeans are allowed to fully participate in life in Switzerland, provided they have a job. People may visit Switzerland when they are wealthy and have a job.

Also, a non-European person may only be entitled to settle in Switzerland to work if they are highly qualified and if their future employer proves such person is absolutely necessary on the basis that there is no one with an equivalent know-how in Switzerland. We are talking about migration for economic reasons, but it is important to know that Switzerland is not interested in people when they are not useful to the country. Such state racism obviously results in hundreds of thousands of workers with no legal status. They are called “undocumented” and live clandestinely, hold poorly-compensated work positions and are constantly pursued by the fear of police control.

We’ve met women who are forced to live at their employers’ house to take care of an elderly person 24/7, all year round, for extremely low pay, under the pretext that they have food and shelter. Some of them have organized groups, affiliated to a union and dared to testify against it, which helped to launch a movement to regulate undocumented immigrants that has succeeded in Geneva. It is a remarkably important action we are trying to multiply to other cities in Switzerland, but it is difficult.

This clandestine, over-exploited labor is tolerated because they are indispensable to the Swiss and European economies. Most underpaid jobs, including those of caretakers and cleaners, are performed by women.

People run away from their country for many and well-known reasons, including damages caused by multinational companies, which violate the human rights, destroy nature, poison the water and are never rendered accountable for the harm they cause. Other reasons include wars, climate disasters, extreme poverty, starvation, death threats, sexist and sexual violence. However, one thing is certain: it is not easy to leave one’s country.

Currently, in Europe, 54% of migrants are women. They, who used to arrive to Europe under family reunification policies, now often migrate independently, in larger numbers, alone or with their small children. They are those who, many a time, give rise to a family reunification request, hoping to bring the father of their children to Europe. In addition to the several reasons that lead people to leave their countries of origin, there are specific reasons for women and LGBTQI+ people due to the violence they suffer: forced marriage, rape, forced prostitution or other forms of exploitation, genital mutilation, human trafficking.

I’d like to mention two militants from “Droit de Rester de Neuchâtel” who, in their May 1st speech, stated: “Those responsible for the precarious labor conditions, for the forced displacement of entire populations, for thousands of deaths in the paths to exile and in Mediterranean, for the wander of futureless young across Europe, for the poisoning of fields and seas, or, also, for domination of a gender over the other, are part of the same system. Class domination, gender domination, racial domination, environmental domination, all of them have the same root: the patriarchal capitalism.” And it is against such system we must and want to fight.

We refuse to be accomplices of the death and exclusion policies that affect the people who are subject to the most precarious conditions in the world. Europe and Switzerland have the means to establish a proper asylum area and implement — with no need to wait the Istanbul Convention — a convention to fight human trafficking and an international convention for the protection of the rights of all migrant workers and their family members. Such conventions, signed and adopted by the United Nations, must be implemented! But this is not what happens. Since the beginning of its existence as a political entity, Europe has been raising barricades and hardening the asylum conditions, year after year.

It was in this context that we, militants from the World March of Women Switzerland, decided to organize in September 2019, in Geneva, a European meeting called “Women, Migrants, Refugees”, to build a resistance network with immigrant or exiled women in Switzerland and in Europe. The meeting was organized as an extension to a huge feminist strike that occurred in Switzerland on June 14, 2019 and that enabled us to create an unprecedented movement, assembling hundreds of thousands of women from different generations, ethnicities and origins.

This year, on June 5, the city of Nice is expected to receive ten thousand women, and we hope the pandemic allows the formation of a feminist wave from all over Europe, which will claim for an open and welcoming Europe. We denounce the European migration policies, the militarization of borders, the criminalization of migrants, the gender and sexual violence that women and gender minorities suffer while they head to exile and also in our country.

This protest, which will happen under the symbol of the kite, a symbol of freedom. It will also be an opportunity to make an appeal to the non-governmental organizations and European militant groups, which are engaged in the fight for migrants’ rights, to take part in the launch of a European feminist petition. We want to fight for supplementary rights, but, above all, we fight for those rights to be effectively implemented. We want to fight for recognition of the various forms of violence as grounds for asylum, and for the people who suffer such violence to be welcomed in our country, as well as to be treated, when necessary, and protected.

This petition is currently being drafted and will be addressed to the European Commission and to all federal governments of the Schengen Area[1], claiming for the systematic recognition of the specific grounds for asylum of women and of LGBTQI+ people. We are protesting together. We will be near the Italian border to remind people that so much suffering and death are caused by the political borders, manly and military constructions resulting from markets, violence and wars.  We are denouncing the borders closure, which is dangerous for the people who had to cross them and reinforces the development of the mobster economies.

We will be there to show that feminists of Europe are against the European policies that criminalize mobility and particularly affect women, lesbians and transgender people. We will be there not only to demonstrate our opposition to such violent policies, but also to launch an international feminist campaign to abolish them in the long term. We will be there to declare that overthrowing such policy that disrespects non-European citizens’ freedom of circulation is one of the priorities of our feminists fights in Europe.

Marianne Ebel is a member of the World March of Women Switzerland, the Droit de Rester de Neuchâtel and the Toutes Aux Frontières [Everyone on the Borders] / Europe and SolidaritéS [SolidaritieS].