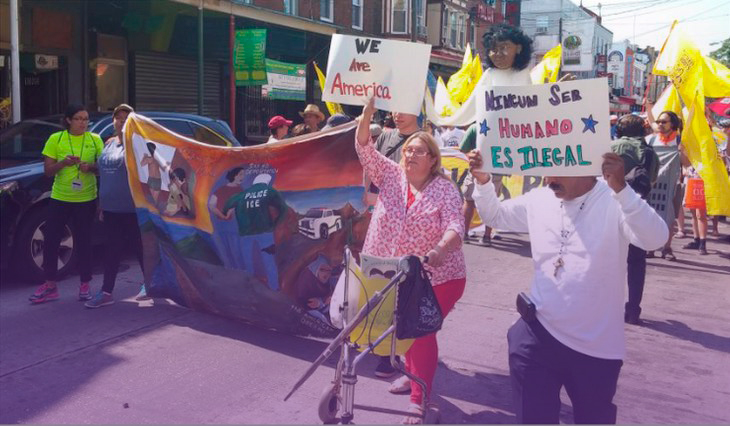 Read and listen to Kathia Ramirez on the work of the Farmworkers’ Support Committee (CATA), in her participation in the “Migration and Refuge on the Feminist Agenda” Webinar.

The United States is known as the country of opportunities, where you can live the “American dream.” But the reality is that we are in “the belly of the beast.” The first time I took part in an international seminar, I found it interesting that participants were surprised when they learned that there are grassroots struggles in the US. Organizations such as The Farmworkers’ Support Committee(CATA) are focused on communities that are impacted by laws, policies, and injustices in the US.

At CATA, we work with the rural community as well as the immigrant and Latinx community. We are a membership-based organization in which most of our members are part of the undocumented community. Our work is based on three branches: immigration (mostly focused on legal counseling), workers’ rights, and food justice.

On May 1st this year, as part of the International Workers’ Day, some of our comrades took part in a march in Washington D.C. The march slogan was “Papers, Not Crumbs” [“Papelessí, migajas no”], underscoring how a migration reform is necessary to benefit the more than 11 million undocumented people living in the United States. This has been pushed back for several years.

The second issue we focus on our work, workers’ rights, includes visiting workplaces and educating workers regarding their rights. There is a belief that the undocumented immigrant community has no right as workers because they don’t have legal status in the country. Actually, employers often take advantage of this to intimidate them, threatening to call “la migra” (the immigration police) or the US Immigration and Customs Enforcement (ICE) if they dare to say or report something.

Finally, the other focus of our work, food justice, is simply because the community we serve doesn’t have the luxury of eating healthy food, neither them nor their families, whether because they lack the resources or because they only have what’s available to their communities. People say farming doesn’t require skill, but it actually requires knowing how to do the work.

Many farmworkers come from Latin American countries where agriculture was their families’ livelihoods. They would make the decisions and had control over what they grew and how. Here, they have to obey the farmer owner’s orders, they have no control over that, and their knowledge is lost. This is why the heart of our food justice program is the community gardens, where people take part in the community, decide what they will grow and how, and share this knowledge with younger generations.

No Human Being Is Illegal

When I first started working with CATA, I interviewed a Central American women who told me about her coming to the US. It was 2014. It’s an important year, because, after that, we started to see an increasein immigration from Central America through the caravans. Many of those who go on this Journey do so because they face so much violence in their home countries, from the government or at home—which was her case.

The woman I interviewed had fled her husband due to domestic abuse. This is the case of so many women. We also see that they are sending children by themselves: they are turned over to immigration at the border and declared refugees, thus being allowed to cross over to the United States. But once they do that, they are criminalized, because they are “released” with an ankle monitor, which was the case of the girl I interviewed. This ankle monitor requires them to be constantly around a power socket to recharge it for hours, and they are forced to report to immigration on a regular basis.

Immigration agents, more commonly known as ICE, don’t have another agency to oversee their practices or policies. The new administration maintains the supremacist and patriarchal measures of the immigration law. ICE officials, and even courts, have great power to make decisions on how they treat people and who they consider deserving of refugee status. In this sense, women are often excluded, because they are seen as a burden to the state. Their children are taken from them, they are forced into conditions where they experience more gender-based violence, including abuse in detention centers, where they are faced with sexual abuse and forced sterilizations, for example.

Not many measures have been taken, and in fact they continue to deport people despite having pledged to freeze deportations for 100 days. Haitian immigrants are being massively deported. Adding to this is other anti-Black, anti-migrant policies and practices that we see as they surveil and capture Black and Latinx migrants to deport them. The United States are not complying with international conventions on the rights of refugees, as they choose, for their own benefit, who is a refugee and who is not. Women will continue to be affected by a triple crisis: an economic, a political, and a climate crisis. Center American immigrants right now are being excluded from refugee status and their stay in the United States is subjected to deportation.

Last year, it was possible to give more exposure to injustices and increase awareness of the reality faced especially by communities of color. Not only because “there was interest in it,” but because the pandemic has brought a lot to light. This happens when there is a catastrophe, but we must take this moment to change the system and conditions permanently.

Over this past year, amid the pandemic, discrimination against Asian communities has increased. There is an increasing number of hate crimes committed against women and older people, against unprotected people such as essential workers, farmworkers, caretakers, and garment workers, industries where there is a lot of alienation and lack of protection, as well as high demand for their services.

The US government has provided cash incentives for American citizens because of the pandemic. Undocumented people have been excluded from that support. Families where only one person is a US citizen have been excluded from that support. People who have lost their jobs and have no social security are not entitled to unemployment insurance. In these families, mothers had to quit their jobs because they couldn’t leave their children at day care, with a nanny or sitter, or at school.

Some families have more than three children and they cannot afford to have three devices for online classes. School don’t supply the materials to continue their learning process. They were not offered training on how to use the technology, and not everyone has internet access at home. Not only that, women also have to take care of domestic work.

Within the organization, we were not able to meet very often with our base, because taking part in online meetings is hard for many people. However, we are already faced with the challenge of women’s participation, due to their situation caring for children and doing domestic work, something that becomes even more difficult with everything the pandemic increases.

Grassroots and community-based organizations have been affected in these times. As employment has been an issue, we created a solidarity fund at CATA for the undocumented immigrant community. Obviously, we were not able to help everyone, and what we could give was not enough. We also felt the need to produce more food these days, both for the reasons described above, and because, even though there have been efforts in food distribution, a lot of that was canned and processed food.

We expanded one of our community gardens, partnered with those who distribute food, and supplied fresh produce. We started farmers’ market days, provided around 10,000 masks, because it was not mandatory for employees to follow health recommendations. Many lives have been lost due to employers’ negligence and consumerism. This is why we joined the international struggle for justice from and for our communities based on a feminist agenda.

Kathia Ramirez is the Food Justice coordinator at The Farmworkers’ Support Committee (CATA) in South Jersey. CATA is a member of the Grassroots Global Justice Alliance (GGJ).