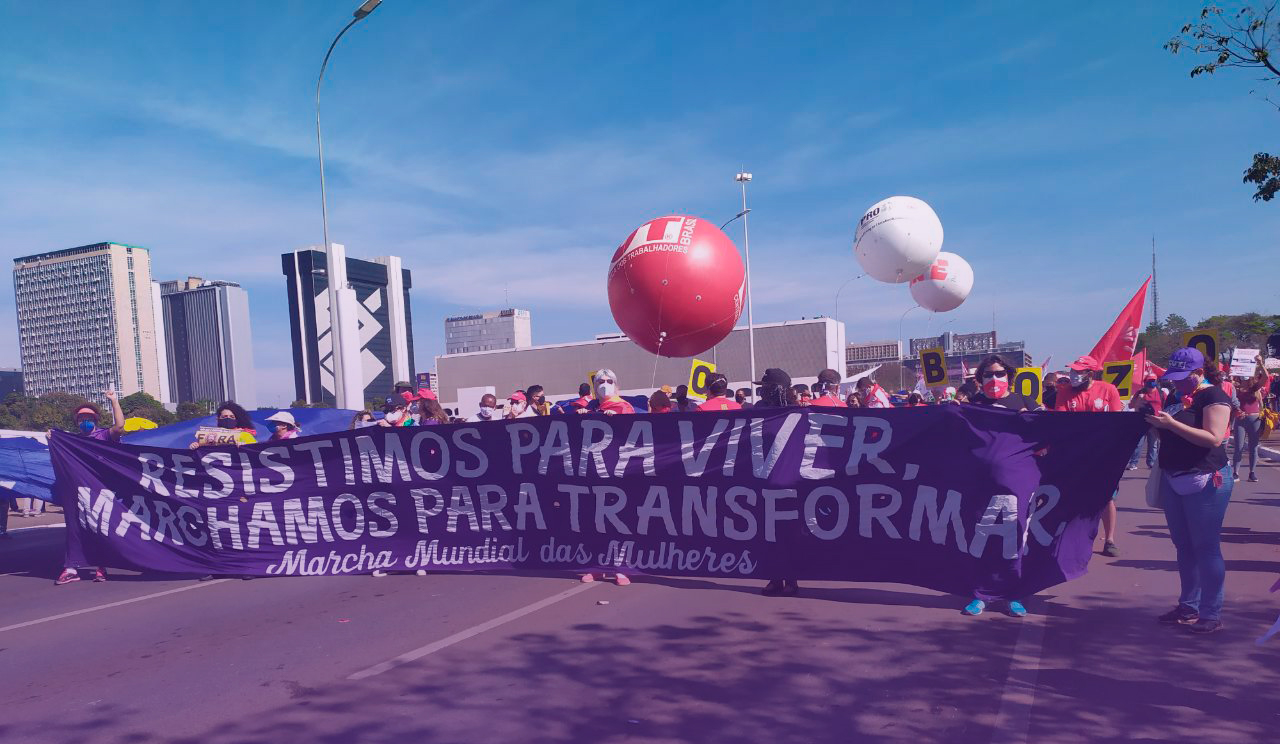 In order to update our analysis of how political, patriarchal, racist, and market authoritarianism has been implemented over the last years, we need to understand the reality that connects different territories. This helps us to identify the challenges we face as internationalist feminists, as well as the paths, expectations, and shared knowledge we are organizing to overthrow authoritarianism.

Authoritarian governments share many common elements in their local strategies, reinforcing patriarchy, and the impacts on women are more extreme. We, from the World March of Women, are reflecting and denouncing the escalation of the capital-life conflict, which intensifies its attacks to territories, bodies, and labor, thus targeting the very basis of life.

Many lives are treated as disposable, and most of us live in precarious conditions. This process is sustained by the dominant sectors with extensive and intensive violence and militarization. Currently, capitalism imposes this far-right and conservative agenda, under which women lose their few recognized rights, suffer with the worst conditions in their daily lives, have to spend more time working outside the home and carrying out care work to provide basic needs for their families and communities. There is increasingly more control over their bodies, and violence has been amplified.

Such authoritarian governments’ attacks affect all sectors of the population. Life has become a synonym for precariousness, not only in labor, but also in all other aspects that have been shredded, such as the right to housing and to agriculture, besides the violence that grows and torments women, Indigenous people, Black people, and migrants.

We know that this conservative agenda is an integral part of capitalism, but it has become a key factor in our current reality that we call “crisis,” where the powerful seek forms to intensify exploitation and increase their profit rates. Changing this agenda is part of a process in which our progress contributes to our strength. Trump’s defeat in the United States, for instance, did not put an end to Trumpism—that is, the organized far-right sectors—, but it was an important step for grassroots struggles.

It is highly important to value how movements have been responding. We are building not only a wide program of resistance, but also of self-organization and self-management, as well as strengthening processes of agroecological and peasant agriculture in communities and territories. In view of the international dimension of the authoritarian model, we react through the international dimension of our struggle.

Our response is to organize against violence in all levels: in our territories, our bodies, our labor, against political violence, persecution, criminalization, and other attempts to prevent us from organizing. Our political education and our daily practices are an expression of this transformation. Such practices reflect actual transformation in our daily lives, because they are inspired by the view of the change we aim at.

Our task all over the world is to express solidarity with our sisters and with the people who are under the attack of imperialism, the market, and authoritarian governments. We are looking closely at our sisters who are under brutal attacks, such as Afghan women, and our internationalism is committed to the permanent struggle of the women from Palestine, from Western Sahara, from Haiti, from Cuba, Venezuela, Kurdistan. Our aim is to strengthen the feminist, grassroots, and anti-systemic struggles and to create a collective view that feeds our actions. Considering changes that are unpredictable, our movements need to be alert to be able to organize fast and solid responses.

Right now, in view of the centrality and urgency of the agenda of Afghan women, we continue to face the challenge of building a wide and global solidarity campaign, in a way that connects with the support to women from other parts of the world and that pushes for the non-recognition of the Taliban government, while we continue to denounce US imperialism’s destructive role. International pressure allows us to build bridges and alliances with other movements to strengthen political solidarity and guarantee freedom and human rights in the processes of political refuge, pushing governments to issue humanitarian visas.

Advance Based on Unity in Diversity

We influence each other, and this influence reaches our political alliances. In the World March of Women, we have become stronger defenders of food sovereignty based on what we’ve learned and received from our sisters from La Via Campesina. We have become stronger ecologists and environmental justice defenders because we walk side by side with Friends of the Earth. Our alliances are key to build a political project to dismantle this oppressive system that acts in multiple fronts.

It’s not possible to organize a movement without creating feminist and grassroots ways of communicating and enabling these processes. This is why we work, so that our action is more and more connected with the construction of a communication policy that stands out against hegemony, that emphasizes the need for international mobilization and efforts, and that is organized based on collective practices that challenge media conglomerates.

We live under a capitalist, heteropatriarchal, racist, and colonial society model. The political project we want to build must aim at dismantling the whole model, not only some parts of it. It’s not possible to build a feminism that is separate from the struggles against capitalism, racism, colonialism, from the struggles for sexual and gender diversity.

Our self-organization as women is what ensures the presence of the feminist dimension in all processes. As we reassure ourselves as political subjects, we add the perspective of grassroots feminism, which questions the cornerstone of this model. With this, we lead paradigm shifts, disrupting false dichotomies imposed by this model.

We reassert the centrality of reproductive labor for the sustainability of life, and position the dimensions of personal life, body, and sexuality as political dimensions, that, for this very reason, are part of our feminist agenda for change. From this perspective, we disrupt fragmented views so we can look at the wholeness of human life and nature and understand how the processes are interrelated and interdependent, and then change them.

Nalu Faria is a member of the World March of Women International Committee and the Latin American Network of Women Transforming the Economy (Red Latinoamericana de Mujeres Transformando la Economía—REMTE). This article is an edited version of the contribution by Nalu during the webinar “Feminist Struggles To Bring Down Authoritarianism.”