Photo/Foto: Friends of the Earth Netherlands 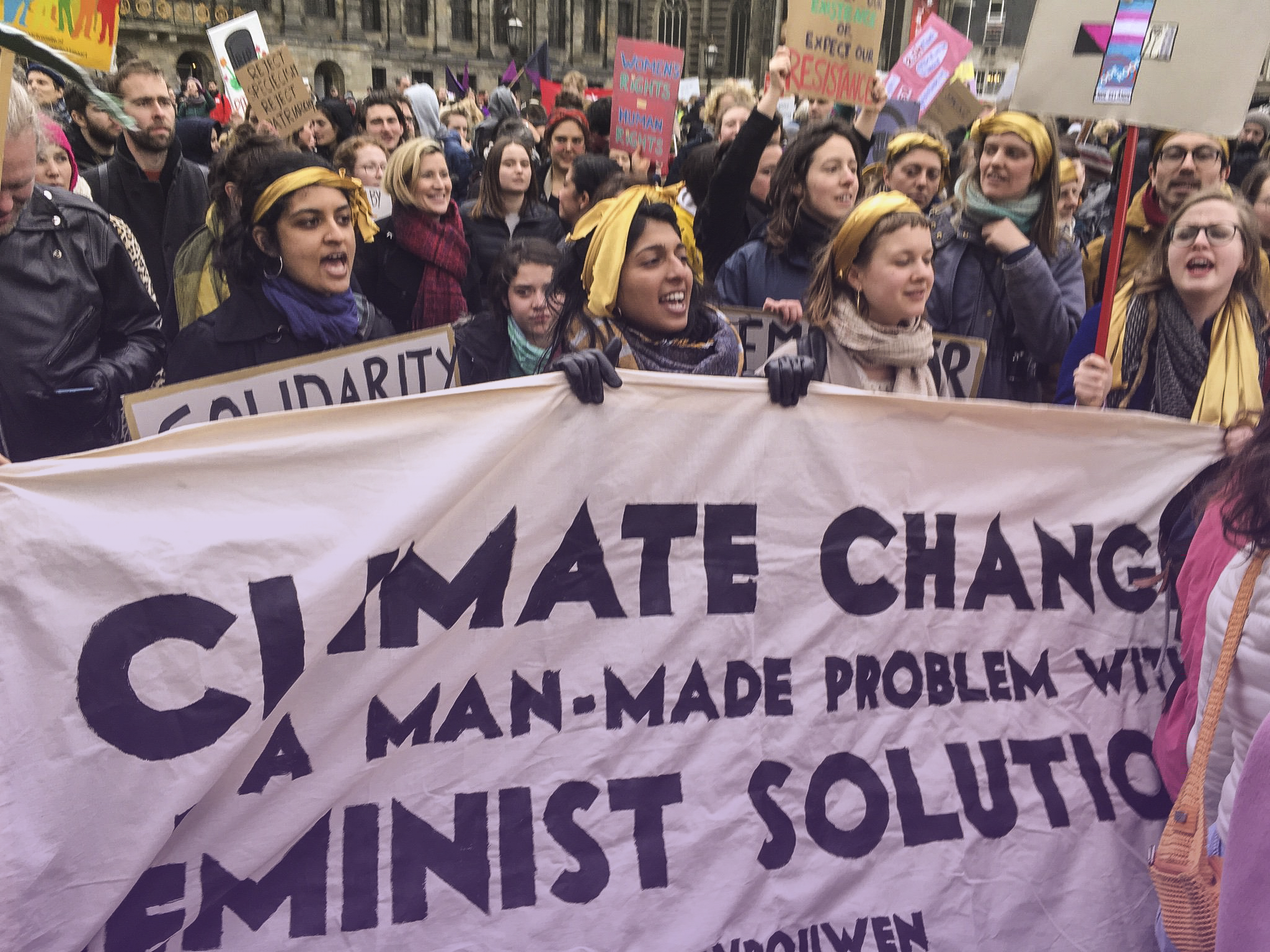 Photo/Foto: Friends of the Earth Netherlands

Read and listen to the words of Karin Nansen, chair of Friends of the Earth International, from her contribution at the “Challenges of Grassroots Feminism” Webinar.

Today, more than ever, the origins and roots of the deep systemic crises that we face are clear, as well as the need to provide a systemic response from our peoples to them. We are living a structural crisis that seriously endangers the ecological systems that make life possible. This poses a grave threat to the peoples’ livelihoods and rights. We know that, when water systems are threatened, the fundamental right to water is threatened as well. When biodiversity is lost or when climate change is aggravated, food production is threatened. These ecological systems are part of our life. We are nature and we must face this profound crisis that emerges from a system that was designed based on capital accumulation. Therefore, the crisis and the ever growing inequality are the products of the concentration of wealth and resources we endure today.

This is a challenge we have moving forward: how can we dismantle the system of oppression and exploitation that also constrains nature? When we talk about extractive activities, for example, we challenge the continuous exploitation of nature which taps resources and ensures this process of capital accumulation.

This requires us to strengthen collective political subjects within our movements, as Yolanda and Sophie said earlier, in which women play and have historically played a fundamental, leading role, spearheading processes of struggle. Today, women continue to do it all over the world, spearheading the struggle in defense of territories, against the commoditization of nature, etc.

These systems of oppression have become stronger as the right, fascism, and neoliberalism advance. They disavow our skill and try to stop our development as political subjects. This is why it is so important to fight them—because there is no way for us to express and strengthen ourselves as collective political subjects if we don’t dismantle these systems of oppression. This is a struggle that is constantly being waged from our movements. The grassroots feminist movement has played a key role, challenging the reorganization of our societies based on the market, on capital, and on the interests of big transnational companies.

Societies and territories are reorganized to serve the interests of big capital to the detriment of what is public and of our collective rights. Collective rights which are the result of the historical accumulation of peoples and movements—and, therefore, they are challenged when crises like the pandemic unfold.

We must move further forward in building grassroots power based on a feminist, class, and anti-racist perspective, which allows us to self-organize and organize our societies based on the sustainability of life. To break this dichotomy between productive and reproductive labor and reorganize our societies from the perspective of the sustainability of life, stressing the importance of care work and its economy, to overturn the sexual division of labor and move forward in acknowledging and realizing women’s autonomy.

This entails a battle of imageries, which forces us to challenge and dismantle hate speech, racism, xenophobia, misogyny. It requires us to stop the continued reproduction of systemic violence in our societies, which, as a consequence of patriarchy, affects women more brutally. We see every day how those who stand up for common goods, territories, and livelihoods are persecuted, criminalized, and even murdered. Women are at the forefront of these struggles.

All this strongly challenges us and forces us to advance in terms of organization to stop the ongoing reproduction of violence from continuing in our societies and territories. We see the continuous militarization of our territories, we witness blockade processes like the one experienced by our Cuban sisters. All this assault against the peoples means the strengthening of oppression and the deepening of the crisis.

The battle of imageries also entails the way we are able to restore the sense of what is public. We are living in a time when the role of the State for the public good is being questioned, and the repressive role of the State is therefore strengthened. This is happening in several countries around the world, where the State’s role to provide public services has been weakened, especially key services for women’s life and rights.

There is a battle in the political arena which we cannot give up. We must reclaim the political arena as a space where we must take strong action from grasroots organizing, from a feminist, anti-racist, class perspective. It is a battle to make sure that our peoples are the ones who define the paths and meanings of the organization of our societies, and to make it possible to overturn these processes of neocolonialism, oppression, and imperialism. The battle in the political arena means moving forward in building grassroots power. And it necessarily means dismantling the power of big transnational corporations, which takes many different forms.

Today we see how democracy is compromised with the growing power of these big corporations that control everything, from the elections to big media, which are able to take part and orchestrate coups. They increasingly take control of politics and get away with more and more impunity, violating people’s rights without being held accountable or facing justice. Battling in the political arena means being able to break this corporate control over States.

It also means decommodifying our societies and nature, which is the opposite of what is happening today. Corporations are gaining more control and they even pretend to be the ones with the solutions for the systemic crisis we face. For the ecological crisis, for example, big corporations present themselves with their market economy, but it is “greenwashed.” When the green economy advances, the commodification of our territories and our society advances as well.

This is why the fight over territory is also necessary, given its importance for our peoples. From the perspective of peoples’ organizing, we see territories as spaces of production and reproduction of life, as spaces of struggle where we can engage and battle in politics, as spaces of culture and social relationships. Nevertheless, today our territories are being rearranged due to the capital accumulation process. This means that they are platforms for destructive actions and processes imposed by big transnational corporations and big national economic groups (oligarchies, the ruling classes). This is not just a local battle. We have to see this from an internationalist perspective of a grassroots feminist, anti-racist, working-class political project.

It is important to point out that, amid this battle of ideas, it is vital to question how this idea of model family is being reproduced, how it strengthens the idea that women should be good mothers, who should care for their homes and take care of their families, and how the State and the public are alienated to push forward the logic that everything can be resolved within the family realm. This means, again, placing women as the backbone of the family, instead of allowing them to develop as political subjects. So this is part of our battle too.

We know that forms of oppression are also reproduced in the territories, relationships we do not want. And we must ask the necessary questions based on these political projects that are shared by our movements—for example, the political project of food sovereignty or feminist economy. The relationship with the economy is fundamental. We cannot disregard how important the economic realm is, and this is why we strive for economic justice, and this is why we have learned so much from feminist economy, which we consider to be a key aspect that organizes our shared political project.

Shared Tools To Tackle the Crisis

In the context of the pandemic, we see how the entire debate and control over vaccines increases the power of big transnational corporations, as well as their ability to make profit and control our lives. Today, the entire development of platforms means the dismantling of the rights that have been achieved through the struggle and the greater exploitation of women’s bodies and labor. The way we deal with the battle within the technology sector becomes even more important as economies grow increasingly digital—which, in this social and political scenario, means more exploitation of the working class.

Finally, our commitment as movements aims to build a shared grassroots political project. It is about converging our political agendas with an internationalist perspective, integrating and developing the internationalist solidarity that this emancipatory political project allows us to do. This internationalist solidarity entails mutual defense and support, and especially means strengthening ourselves as political subjects in our struggle against the systems of oppression. If there is one thing that internationalism has taught us, is how important it is to fight against oppression and exploitation in all parts of the planet, and that the struggle of all peoples anywhere in the world is our own struggle. We have a lot to learn from the history of countries like Cuba and the history of our own movements.

This is an edited version of Karin’s contribution during the World March of Women’s “Challenges of Grassroots Feminism” Webinar, held on February 23rd, 2021.