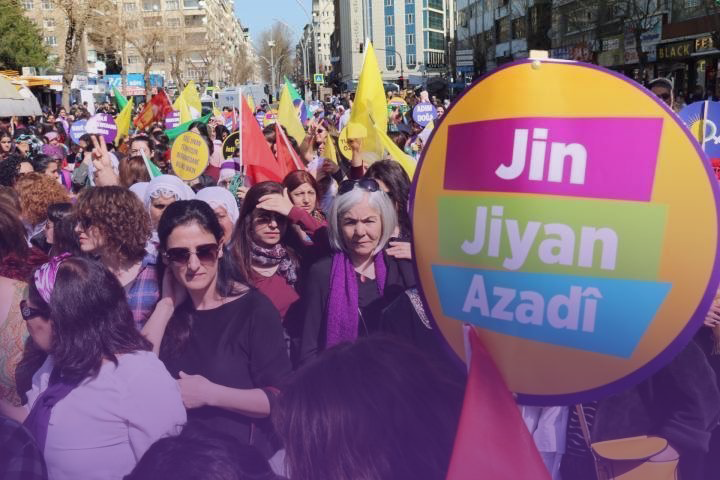 Read the article from Hacer Özdemir about the Kurdish feminist struggles against patriarchal domination and the Ezidi femicide.

Discrimination by sexuality, skin color, ethnicity, belief and social environment are significant difficulties standing before both knowledge and the production of knowledge, as well as scientific and gender perspectives and norms of critical thinking. The Ezidis, a native people who lives in Northern Kurdish regions, have been facing daily the firman, how they call the violent attacks and persecutions against their community. The femicide of Ezidi women is based on a code of discrimination that perpetrates the colonial and post-colonial social structures that still exist, which evidences the vital importance of looking at the issue critically.

The term “femicide“was first used in Britain in 1801, meaning to kill a woman. In the late 1900s, femicide was redefined as “misogynist killings of women by men”. The term was then adopted by feminists movements and official organizations, becoming popular in the United States and in many parts of the world. Femicide is gender-centered killing of women that take place every day in all corners of the world, it has existed for a very long time, but it has increased both in intensity and visibility as women’s struggle for equality develops. Femicides generally have their essential origin in the unwritten laws and customs of the society. Therefore, these customary rules, which are generally determined by the law-maker men, have always been nothing but laws, or firmans, of death for women. Patriarchy, which alienates women from all planes of social life and traditions and customs that nurture, strengthen and reinforce it, constitute the starting point of femicide.

The woman was put in the role of a fatalist, obedient slave, responsible for the menial, unskilled tasks of the family. Even though she maintained her role of passing on cultural knowledge, she was deprived of all her social privileges. It is precisely this notion of deprivation that is both the cause and result of femicide, which keeps happening in different forms. At times under the name of witch-hunts, sometimes as raping women during the war in Bosnia, at others as kidnapping and selling Ezidi women in slave markets, depriving them of their identity, sometimes as abducting Kurdish women to Arab countries as war booty in the wake of Anfal in Iraq.

All that was inflicted on the wise women of the Middle Ages, but it is still going on in our geography in accordance with the norms of modern age. At first women were burned alive, dispatched off to guillotine and subjected to all sorts of torture, violence, sexual abuse and rape at the Inquisition courts. Now, they are trying to force women into submission, to dominate their minds, break their will. They are trying to create soulless, slave, obedient women with no self-identity in place of resisting, wise and strong women.

Mechanisms of today’s patriarchy to weaken us

As a consequence of identifying women as being defenceless, they created an identity which needs to be defined with reference to someone else, as the women being someone’s spouse, sister or mother. The depriving of a woman sense of belonging, the devastating policy of splitting up the wholeness of women’s spirit and body and even directly targeting her existence has systematically continued to this day. Gender discrimination and the increasing normalization of sexual attacks and killings of women is significant proof of femicide becoming commonplace.

The current constitutions of states as well as their “lack of principles” on equality and freedom normalize femicide. Innumerable individual and social cases which show that women are the first to get attacked during conflicts or wars are important proof of women being considered men’s property. Women are attacked as the sole possessions of the male world and retained as war booty.

Conflicts are often moments which exacerbate existing lines of social tension make wounds bleed and deepen injustices. Therefore, a lot of hard work, from healing wounds to providing for the family, falls on the shoulders of women. In order to understand, comprehend and develop proposals to resolve all these, it is necessary to deal with the privilege of power, force and administration in terms of both global and local cultures. For it is impossible to put an end to the course of events that strengthen patriarchy without deciphering the codes on which social norms are based.

The imposition on women of certain cultural elements emanating from outdated customs and traditions pushes them into a position almost of post-colonial slavery, impositions that are often reinforced by references to religious moral commandments. It is not a coincidence that such pressures increase, especially in times when women’s demands for freedom, equality and self-reliance are on the rise. It seems unlikely that the ongoing massacre can be stopped without a comprehensive description of and opposition to such social oppressions that lead to femicide.

The biggest victims of the war in Bosnia and Herzegovina (1992-1995) were undoubtedly women and defenseless children. It has gone down in history as a war in which approximately 310.000 civilians were killed, millions of people became refugees, tens of thousands of women were raped, civilians were left to starve in concentration camps and were killed massively. Many women who were sexually abused and raped during the war could not tell anyone about their experiences for years out of fear of being stigmatized in the society.

Whether it’s the Kurdish women abducted during the Anfal massacre in 1988, the victims of the Bosnian War, or the inhumane treatment of Ezidi women and children who were abducted by the Salafist mob who call themselves the soldiers of God, what they all have in common is that they are the creation of global projects implemented locally.

Ezidi women are struggling for a life free of violences

In the first quarter of the 21st century, a massive Ezidi genocide took place in our region. We have to articulate that peoples of this geography also took part in carrying out this genocide. It is uncanny for all of us that such a shocking and terrifying event took place, but none of us can turn our backs on what happened. Although the massacre carried out by ISIS on August 2014 was primarily against the Ezidi community, it still had a clear target of femicide. The fate of many women who were kidnapped, detained, abused and raped and sold in slave markets before the eyes of the entire world still remains unclear.

The events in Shingal/Sinjar showed us once again that patriarchal structures are trying to eliminate egalitarian and libertarian communities in the first place. Even if we put the Ezidi femicide within the framework of genocide, it is a part of the femicide that has been going on throughout history. But we also can say that the Ezidi femicide in its most severe form within the framework of the Ezidi genocide also led to the self-reflection and organization of women. Every massacre is also a continuation of gender discrimination and the very art of death of the patriarchal world.

Policies against femicide in the world, especially in Iran, Turkey and the Arab world, must have clearly disturbed the conservative, right-wing, bigoted circles nostalgic of the Salafist period, because of the extreme sectarian ISIS, which emerged on August 3, 2014 and grew rapidly. The International Ezidi Women’s Conference held in Germany on March 2017 underlined the need to carry out effective international struggle to free Ezidi women held by ISIS and decided to address August 3rt as the International Day of Action against Femicide and Genocide. Even thought the European Parliament recognized the genocide and international institutions wrote reports putting the massacre in the context of “crimes against humanity”, the government of Turkey, yet alone recognizing the genocide, has not even condemned the massacre in Shingal to this date.

Today in Turkey, a circle of bigoted religionists, supporters of patriarchal domination, right-wing and fanatic religionists are producing new justifications for femicide by giving religious references as femicide and reactions against it increase. A paradigm of social awareness and principled resistance to these and similar dangers is more needed than ever. As women, we once more remind all of the need to declare August 3rd as our international day of struggles. Women’s resistance in Shingal has inspired women all over the world. In Şingal‎ language, women are jin, which means life. No one can ever kill life.

Women’s solidarity and women’s organization should be increased, initiatives should be established and methods of struggle against patriarchal domination should be developed. We need to think globally and take concrete steps locally. The situations that develop in other countries should be followed closely. Solidarity and common struggle should be universalized, because femicide takes place as a consequence of the global system of oppressions and also occurs on a universal scale.

Hacer Özdemir is a feminist activist of the World March of Women in Kurdistan.