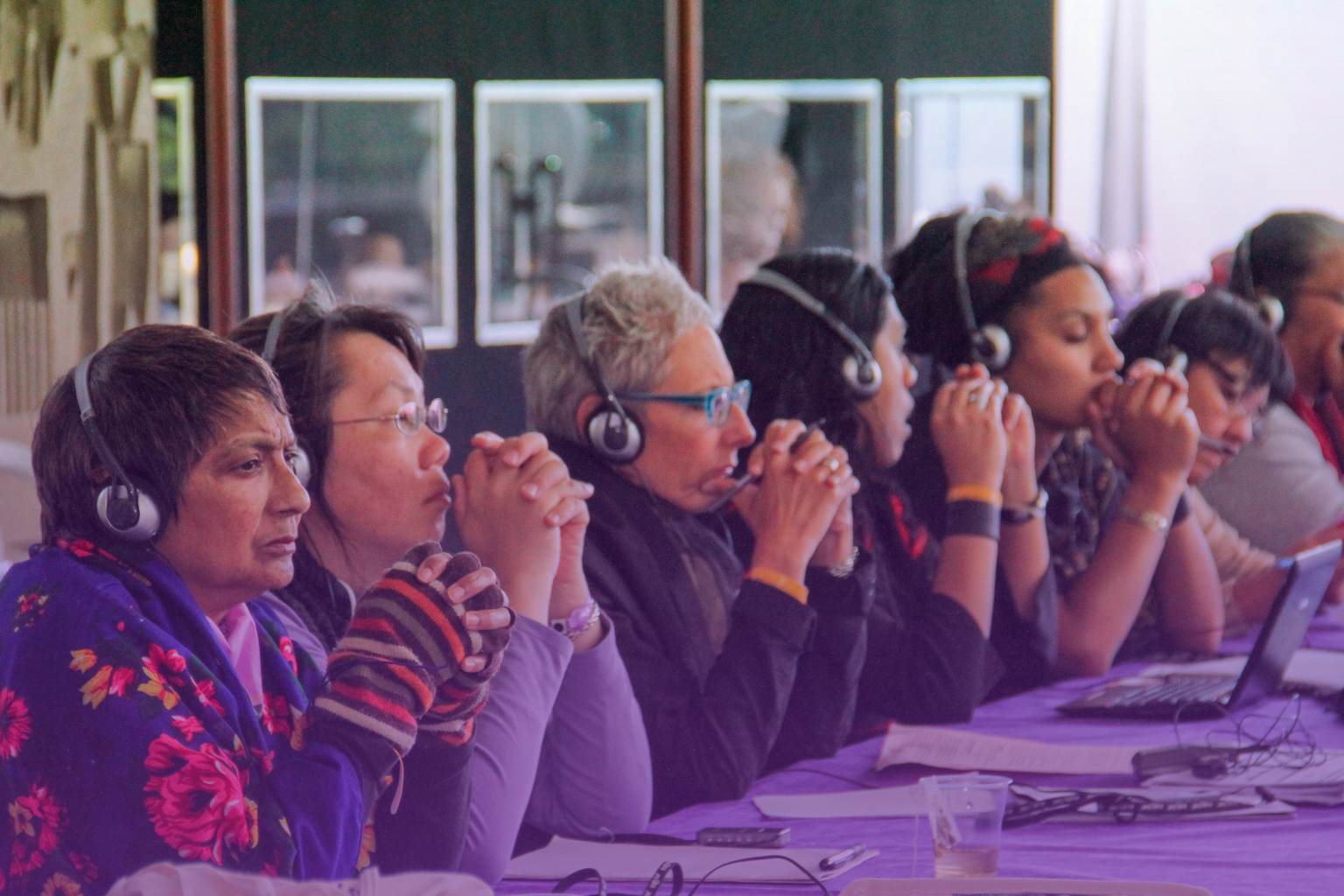 Translate and Transform: The Role of Translation in Building Internationalist Feminism

Translation can be a tool of either oppression or resistance. Colonialism has always exploited marginalized peoples as translators and interpreters for its own purposes. As of the 16th century, in the territories that eventually became Brazil, the Europeans sent Portuguese degredados (exiled convicts) to Indigenous communities to learn their languages and then work as interpreters and mediators to serve the invading authorities’ interests. They also kidnapped Indigenous people—many of which were women—and took them to European countries to learn the languages and customs of the invaders and help them in their colonial offensives. In another form of political domination, Portuguese Jesuit priests learned the Tupi language to translate religious texts and instruct the non-Christians in the Christian doctrine.[1] These strategies were used not only here, but in many other colonized territories.

This movement, in which translations are largely from the colonizers’ languages to the languages of populations that were abused and encroached, strengthens the hierarchy between what deserves to be known and what should be forgotten, between worldviews that must be shared and those that should be disregarded—and, consequently, between the bodies and people that are legitimized and those that can be overpowered. These dynamics still pervade cultural and ideological productions, continuously reinforcing canons that are overwhelmingly made up of white men from the intellectual and economic elites of the global North. Throughout history and to this day, what is worth reading, reading again, translating, and being established as canon is highly limited to what the powers that be and the owners of the means of cultural production (publishers, producers, distributors) regard as relevant.

On the other hand, translation is also an intrinsically necessary tool for the organizing efforts of political actors from territories that speak different languages in their joint processes of resistance. Whether for holding international meetings, establishing counter-hegemonic media outlets, spreading political materials, or organizing mobilizations, it is supported by translation (and interpretation—i.e., “oral translation”) that actors organized around common agendas can expose their struggles internationally; communicate and formulate common political grammars; promote solidarity efforts; share information, formulations, and experiences of struggle; challenge the hegemonic narrative; make denunciations; and strengthen their advocacy capacities at the international level.

In the 20th century, “translations of foreign texts contributed to the militant nationalism of anticolonial movements—between 1955 and 1980, the most frequently translated author in the world was Lenin.”[2] In recent decades, movements such as the World March of Women and La Via Campesina are examples of organizations that have become stronger through many voices and many languages, building political strategies between peoples and movements around the world to face common struggles against capitalism, patriarchy, and racism in their different manifestations.

To serve this role, translating cannot be understood as merely taking a speech from one language to the other, disregarding the complex relationships not only between languages, but within the same political/language/cultural system. There is an ideological charge to every production of discourse. Power relations, asymmetries, different backgrounds, and accumulated experiences permeate languages even between people who speak the same language.[3] These tensions become more complex when this interaction happens between different languages, and more so between hegemonic and non-hegemonic languages, people in positions of power and those who are marginalized. This is why being aware of the translation process is so important, considering the texts chosen, from where, to which purposes, and the effects of different discursive choices. We must understand translation as a practice—a political and ethical one—that recontextualizes the discourse, aware of these tensions, but also of its potentials.

There is an aspect that increases the challenge of translation: when we do not have access to the text or speech in the language in which it was written or made, but only through a translation of it—for example, an Arabic text translated to Portuguese from its English version. We call that indirect translation.

As a translator working with the Capire portal, I will now briefly reflect on its experience of internationalist feminism from the perspective of our translation practice. The project was born with the inherent need for indirect translation, as its current team’s language of communication and work is Brazilian Portuguese. Its content comes from women who live and do political work in all parts of the world, and all materials are simultaneously published in at least four languages.

With limited time and resources, Capire is not able to have a team at its disposal for every language pair and every direction to encompass all territories with which itis engaged. An interview conducted in English, for example, would require at least three translators working from English to Spanish, French, and Portuguese. Turkish-language content would require four translators, while materials in Korean or Arabic would require other four translators each. And how many feminist translators would it take to avoid indirect translation and publish the projects we fondly call “Towers of Babel,” which sometimes include excerpts in Capire’s four working languages (or more)?

It was supported by indirect translation, for example, that we had the opportunity to learn about the work carried out by peasant women from South Korea. The Brazilian team conducted the interview with the help of a La Via Campesina militant, who served as a Korean-Spanish interpreter. Without indirect translation, we would not have access to the poetic production of Al Khadra, who created oral poetry in Hassaniya for the self-determination of the Sahrawi people. Some of her poems were transcribed in Arabic and reached Western languages through an English translation, which was the basis for our translations at Capire. How many people would be qualified to translate directly from Hassaniya to Portuguese, for example?

It is also by triangulating between languages that Capire strengthens its exchange of experiences of struggles with Arab women. It is able to publish writings originally produced in or translated to Arabic only thanks to the relationship between authors, translators, and editors, grounded in the concern for language itself, but also for a feminist political vocabulary.

Understanding indirect translation as a collective practice helps us tackle its challenges, as we are mindful of the context of the “original” text even when it is not originally written in our working language, while also reflecting on the implications of recontextualizing it in a different language.

Indirect translation can and must be ethically, responsibly, and conscientiously done, aware of the consequences that it can produce—but it should never be a deterrent for the production of new pathways toward sharing knowledge, worldviews, experiences, voices, projects, political strategies, bonds, and imagined worlds.

We also may reflect on what original and derivative mean. Feminist translation studies have for decades challenged the dichotomy between original work of authorship—seen as masculine, active, positive, pure, and faithful—and translation—regarded as feminine, passive, negative, impure, and unfaithful. There are heteropatriarchal metaphors that produce and reinforce this image in expressions such as “belle infidèle” (the “unfaithful beauties”) and “traduttore, traditore” (“translator, traitor”), a rhetoric that sexualizes and feminizes translation—an opposition that echoes that between productive labor (the original text) and reproductive labor (the translated text).[4]

There are other metaphors treating translation as the building of bridges, the place between cultures, the mediation, the tool to allow communication between languages and cultures. But we can also situate the translator in a broader system encompassing the two (or more) languages and cultures, and not a place “between them.”[5] The translator is not an external or detached agent only serving the purpose of fidelity or mediation. When they translate, they concurrently become the reader of the original text, the producer of the translation, and the formulator of the process through which they make it possible.

Indirect translation allows the continuity of this winding path when the direct routes are blocked by the obstacles posed to marginalized languages. When it is produced collectively, it expands this system, triangulates between languages, jumps barriers, and breaks through blockades. Even if it leaves the process with a broken foot, it lives and produces a different time in a previously uninhabited space.

When European languages are given new meanings by their speakers in territories that have been colonized for centuries, they are no longer exclusive of the colonizers, as they are reclaimed and transformed with different forms, rhythms, traditions, and references.[6] The Spanish language spoken by the women of Cuba, the Portuguese language spoken in Mozambique, and the French language of Ivory Coast are not the same as those spoken in the countries that colonized these territories. Yet there are tensions in these language relationships: the Mozambican feminist militant Nzira Deus, for example, wrote this article in which she addresses the issue that Portuguese is the only language spoken in public decision-making spaces in Mozambican communities where many women do not speak the colonizers’ language. This leads us to reflect on how these official spaces alienate these women as they do not provide translation and interpretation tools and do not have bonds with the people from the territories. It also shows how important it is to have key people in the territories, grassroots militants who do not leave anyone behind and help those who don’t speak a country’s official language be understood.

A translation project as part of a feminist, anti-capitalist, and anti-racist political project cannot limit itself by colonized views on what an ideal text or language is. Nor should it be based on a monolithic hierarchy of text quality in which the first writing is the “pure original,” the translation to a second language is “unfaithful,” and indirect translations are even more precarious byproducts. Deciding who to translate, to what languages, making what discursive choices, to which purpose, and based on what principles—all that is part of translation politics that can be used as tools to tackle global neoliberal capitalism, imperialism, and racist and classist heteropatriarchy. It is based on this perspective that we undertake our translation practice at Capire.

[1] Researchers Dennys Silva-Reis and Marcos Bagno write about this history in The Interpreters and the Historical Formation of Brazil: The First Four Centuries of a Forgotten History.

[2] UNESCO statistics, as described by the translation theorist Lawrence Venuti in The Scandals of Translation.

[3] Lawrence Venuti addresses this in The Translator’s Invisibility.

[4] This argument is further discussed by researcher Lori Chamberlain in Gender and the Metaphorics of Translation.

[5] This argument is presented by the scholar Maria Tymoczko in Ideology and the Position of the Translator: In what Sense is a Translator “In Between”?.

Aline Scátola has a background in journalism and Portuguese language and literature and has been a translator for more than ten years in Brazil. In recent years, she has worked as a translator with grassroots movements and organizations and has collaborated with Capire since its establishment, in 2021.