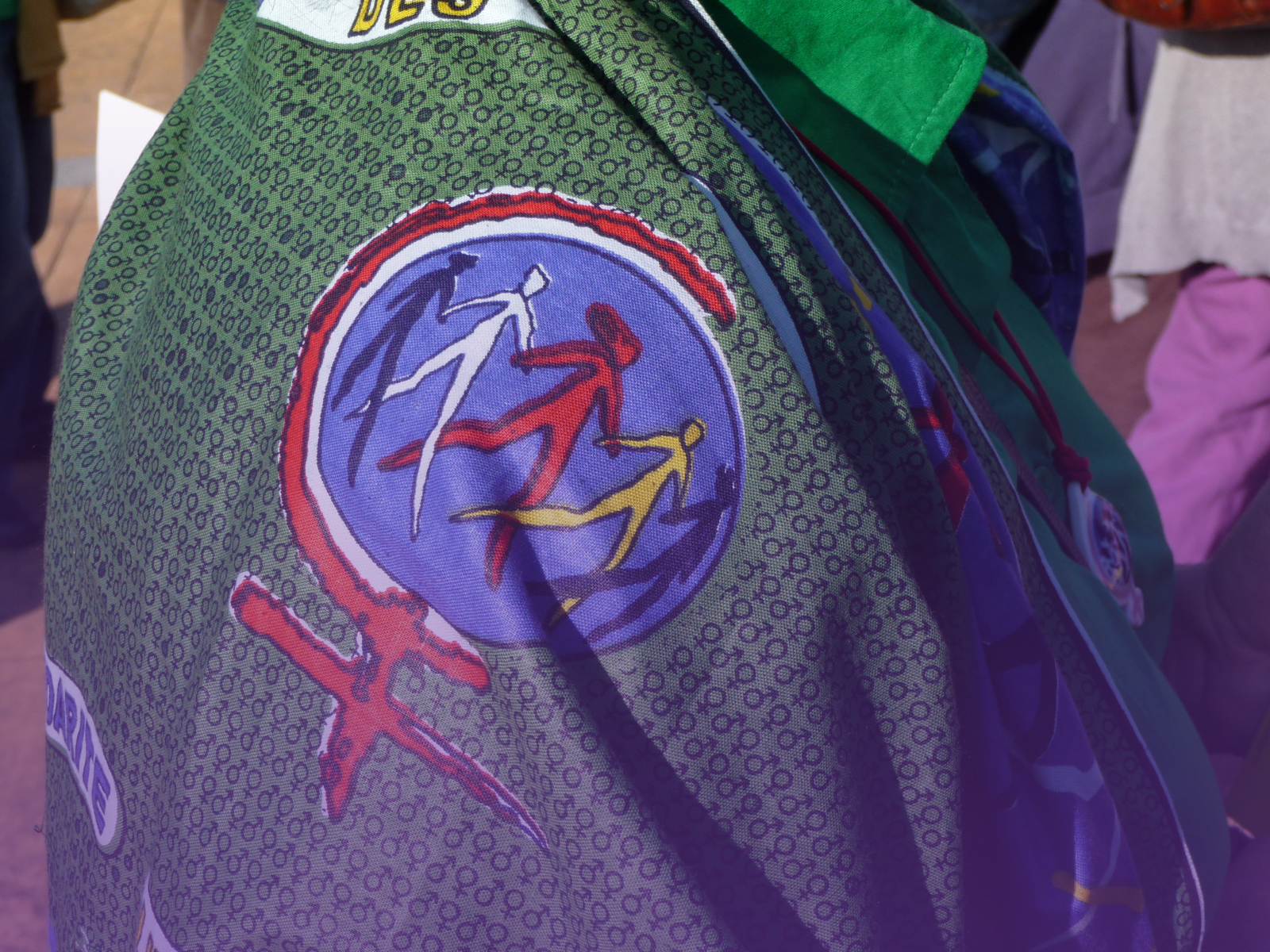 The World March of Women’s repertoire of action and reflection to build an anti-racist, anti-systemic, and grassroots feminism.

Feminism history has been told by many voices and built on different political strategies, since we, women, live multiple forms of oppression: patriarchy, capitalism, racism, colonialism, and heterosexism. Although such problematics are diverse, we, feminists, are engaged in a common struggle for equality, freedom, and autonomy.

We refer to grassroots feminism as the struggle to transform oppressive relationships between men and women. “Grassroots” suggests the idea that social change is made along with the very basis of society, the people, not only by and for women; in other words, it is not only about belonging to a base group, but a political aspiration for transformation based on the left-wing thought.

In Latin America, grassroots feminism is connected with wider political struggles. Women from grassroots sectors identified with feminism without giving up their social, political, and class goals. Authors such as Georgina Méndez, Lorena Cabnal and Aura Cumes also emphasized decolonization of Latin-American feminism. Patriarchy is experienced differently in a context of colonization and slavery: “hiding such asymmetries under the fallacious argument that there is a universal way of being a woman would be a shame”.[1]

Joint efforts by organizations and movements in the World March of Women are an example of transnationalization of struggles as from their very bases. Although the March is based on an internationalist view, it is deeply anchored to local groups. The platform and the discourse of this global movement are intimately connected to local issues. Construction of common platforms of action requires a continuous process of representation and consideration through different spaces and scales. It contributes to the construction of the movement’s identity, since “as the March has sought to become progressively more grounded in daily life struggles of women around the world, it has become increasingly sensitized to the diversity arising from place and the politics of geographic location in movement practice”.[2]

The March recognizes the diversity of women, pointing out the overlapping oppressive systems: patriarchy, capitalism, racism, and colonialism. Women of the movement are the political subjects of transformation of everyday life. They propose alternatives to change such realities through grassroots education.

Their repertoire of actions varies according to the political culture of each region, but the emphasis continues to be the mobilization power, the groundbreaking and creative feminist street demonstrations connected to grassroots methodologies of education, based on awareness of international solidarity grounded in local processes.

Women, Subjects of Emancipation in Alliance with Anti-systemic Movements

The March emphasizes that women are protagonists of their changes. Militants come from base groups of women, grassroots sectors whose militancy is grounded in the local community context. They are many times connected to mixed organizations that prioritize alliances with peasant and union organizations.

Assuming themselves as feminists is a not a condition for women to become members of the March. As militants Miriam Nobre and Wilhelmina Trout wrote, “we want all militants to identify with feminism during the process”[3]. Militant Sandra Morán refers to the March’s feminism as “the expression of women from different grassroots sectors, who welcome feminism as a bet and a proposal that helps changing their lives and their ways of action, also organized in other movements”.

This is why the March follows up participative processes so that women may create conditions for collective organization and deepen the awareness process regarding the causes of oppression. During her intervention in the 9th International Meeting in São Paulo, in 2013, Miriam Nobre, from the WMW in Brazil, explained the importance of spaces for conversation and interchange to build up the movement.

We tackle one same discussion several times at the spaces for interchange, so the issue matures and we get to a positioning, but it takes time. Zapatistas say that their movement advances on a slower rate, so no one gets lost. We have the political commitment to respecting everyone’s timing, so they feel they are part of our movement. Our solidarity is not a shallow one, it is empathy, it is putting oneself on the other person’s shoes, sharing the energy, and looking to one another from a different perspective. Such empathy allows us to build a strong feeling and expand our agenda.

Another characteristic of the March that echoes grassroots feminism are the alliances with other social movements to resist and create alternatives to capitalism and patriarchy. Such alliances are not just a “sum” of demands, but the sharing of viewpoints. The movement approached this subject in the internal report of that 9th Meeting:

Our feminist struggle aims at another model capable of ensuring women’s rights to a free life with no violence, with equality between men and women, with social justice, sustainability, and which encourages solidarity between people. This is why we understand that women’s alliances with other social movements are key to strengthen our resistance and advance to overthrow patriarchy and capitalism at once.

Grassroots Education and Communication Are Tools for Change

The March uses the grassroots methodologies of education according to Paulo Freire’s praxis as a tool to form the movement’s political basis. In an interview in June 2015, in Montreal, Sandra Morán, from Guatemala, said that “we need educational processes that allow us to discover ourselves. It is not an exercise of learning categories and concepts. It is a process of discovery, education, and self-awareness”.

Before getting into the discussions and decisions, we examine the context from which feminism’s contributions are retrieved to build a common basis. This educational process is essential to formulate the critics to the oppressive systems and to create alternatives as from women’s experiences. As Sandra Morán emphasized, it is a matter of building a political subject by developing three elements: a common understanding of reality, a transformative political project, and the joining of forces as from women’s practical experiences, recognizing their epistemic capacity.

Grassroots feminist education is not a theoretical act; “it deals with the body, it needs the symbolism, the emotions, the experiences. It is a path to be continuously followed, we don’t start from scratch”, Sandra said during an intervention in a regional meeting of the Americas held in Cajamarca, Peru, in October 2015.

Educational processes help to build international solidarity between women and the peoples. During the interview, Sandra approached essential issues: “how do we carry out an anti-systemic struggle that allows us to see all forms of oppression and their consequences in women’s real life? (…) Our life is full of prejudice, phobias, fears. And many of them are obstacles that don’t allow us to be supportive. We need to talk about such things, reflect, become aware of it. And we do so through processes of education and spaces for reflection”.

In line with it, grassroots communication uses new technologies and art as strategic elements for the movement. Communication at the service of movements is a key counter-hegemonic tool for the collective memory of women’s struggles and voices. Using grassroots educational processes allowed us to face issues even when there was no consensus on them. One example is the understanding of heteronormativity and lesbians’ rights, as explained by militant Celia Alldridge, from the WMW in Brazil, in September 2013:

We don’t evade issues or subjects that are not easy, regarding which we don’t necessarily have one single international positioning, but which are essential to the lives of many women. This year, such was the situation of lesbians and of how we understand the oppression they suffer. In previous years, however, it was prostitution, abortion (…). We have seen some change, not fake changes; discussions that not always are comfortable are getting deeper.

The March has contributed to the positioning of grassroots feminism in transnational context, betting on a feminism grounded in the different socioeconomic, cultural, and generational realities of women who are part of it. Its strategies prioritize street feminist actions connected to grassroots communication and educational processes, claiming — based on the grassroots Latin-American left-wing tradition — the joining of anti-capitalist, anti-patriarchal, and anti-colonial struggles.

Through grassroots education, the March has created processes of reflection and construction of common agendas, alliances, and transnational solidarities, where there is not one single route or strategy. Alliances with movements such as La Via Campesina and Friends of the Earth strengthen the struggles for depatriarcalization, decommodification, and decolonization, with local roots and internationalist aspirations, in march, until we are all free.