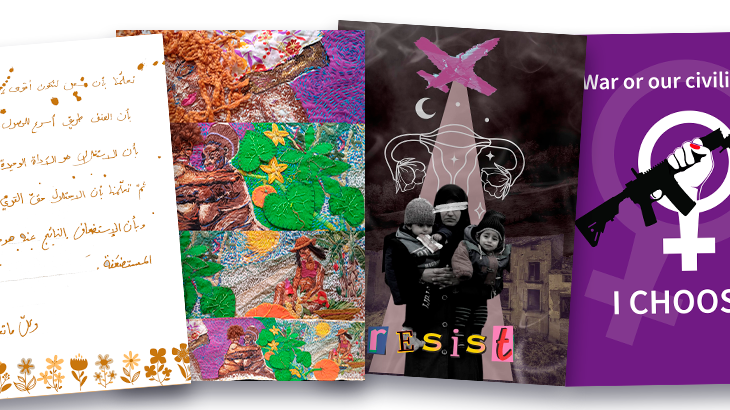 The Peace Summit “No to NATO” will take place between June 24th and 26th, 2022, concurrently with the NATO Summit. It was organized by several grassroots movements and platforms and it will be held in Madrid, in the Spanish state, bringing together delegations of militants for peace and demilitarization for three days of discussions, workshops, cultural events, and a public demonstration.

The key demand of the organizations that signed the declaration of the Summit is to dismantle the North Atlantic Treaty Organization (NATO) for its role in escalating conflicts, warmongering, and the nuclear agenda. In the first half of 2022, Capire published a number of pieces on the feminist critique against warfare and NATO, as a contribution for the process of preparation of the Peace Summit.

We have published an excerpt from a letter by Rosa Luxemburg that says a lot about the afflictions of the war culture. We have interviewed Kate Hudson, an activist with the Campaign for Nuclear Disarmament, and Cindy Wiesner, of the Grassroots Global Justice Alliance, about their perspectives regarding the war in Ukraine. We have also written about the sixth episode of “Eat NATO for Breakfast,” a show by Peoples Dispatch featuring the feminist activist Kristine Karch. And we have also published the recording and transcripts of contributions by Rania Khalek, Nora García, and Nana Aïcha during the online panel “Women Against War.”

Now, on the day of the opening of the Summit, we publish anti-imperialist feminist art! As part of the call for posters about “(in)security,” launched by the organization of the Summit, we publish the subsection “Feminist (In)Security: Women Against War.” We call participants to reflect on women’s challenges and practices to sustain life in the context of war, and on the contributions of feminism for peacebuilding. You can see the outcome below: ten posters produced by sisters from nine countries, using different manual and digital techniques.

The posters feature the role of women in grassroots resistance and their commitment to peace and life. They oppose the arms race and recall the struggle waged by feminist leaders who have been persecuted by militarism and racism. They affirm creativity, care, diversity, and the urgency of promoting violence-free life.

Check it out below:

Poster Gallery for the Right to Abortion

Check out the photo gallery with pictures of May 1, Workers’ Day, in Argentina