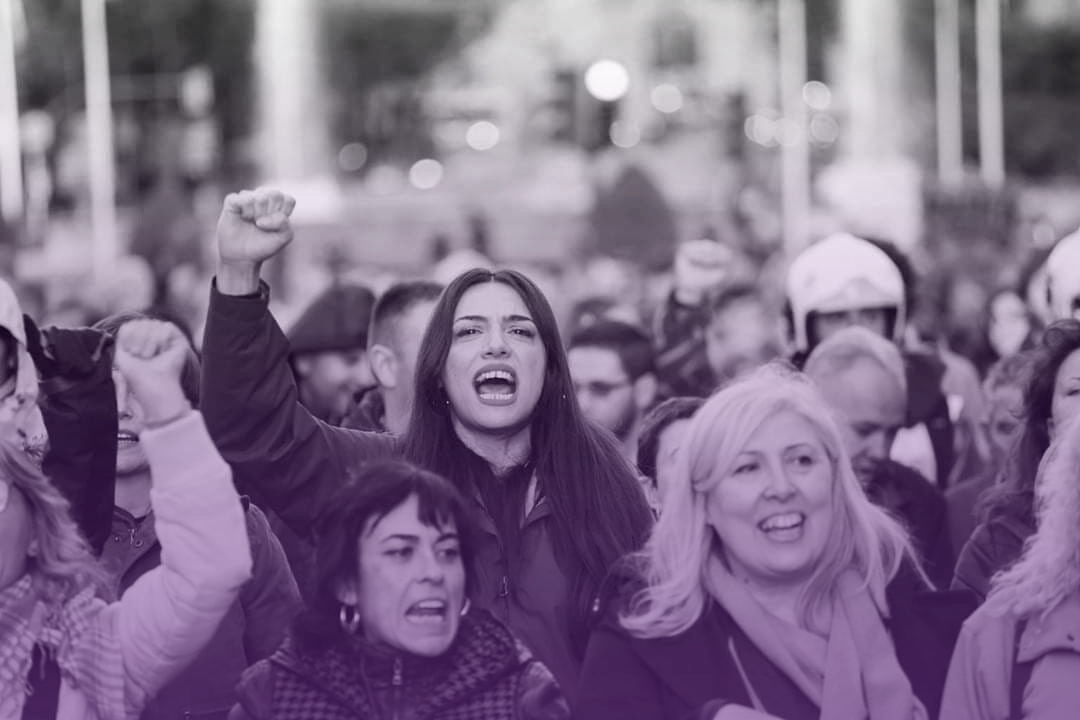 Feminism Is a Global Cry Against War

This year has been marked not only by war but also by our return to the streets on March 8. In my town, Madrid, thousands of women took to the streets with the slogan “rights for all, every day.” “All” and “every day” tell us that, to look into the current political situation and its very dangerous geopolitical terms, we do not start from scratch, we are not roaming in a void, because feminism works through the everyday lives of all women who are part of our communities.

It is an honor to speak with such powerful women, women from the global South who know so much and have something to say about war. Women who are waging a battle of ideas, which right now exposes how fragile this left is and how much it must rethink itself and develop a new framework of battles. A battle against those who, in the name of peace and democracy, establish the order of markets, subordination, and exploitation of people and resources.

Feminism is a global cry that offers us a roadmap in which “we” means all women and “all women” is what provides us answers. Facing the “us first” of those who advocate for the criminal alliance between capitalism, patriarchy, and imperialism, we say “us, together.” For this reason, women from all parts of the world have taken to the streets to make this purple horizon visible, in which we struggle for peace in Ukraine, which in turn means dismantling the North Atlantic Treaty Organization (NATO).

Regarding this “all,” we do not forget anyone. We also struggle with the Sahrawi women against the murderous regime of Mohammed VI of Morocco and his alliance with Europe. We struggle with Palestinian women against Israel’s Washington-funded apartheid to control a region of the world that has not been allowed to decide their own fate. With Yemen, with Sahel, with all places around the world, we as women know that now, right now, when everything is being fragmented, divided, polarized, simplified, and forgotten, we must pause, reflect, and provide a collective response: a feminist agenda for peace. Because yes, we knew how to achieve hegemony, and yes, we can create a new framework in face of neoliberalism.

We must situate our view of the world, which expands analyses, builds alliances, and creates processes of cooperation, solidarity, and mutual support, always looking at those who suffer, who are exploited, oppressed, and rendered invisible. This is also why, while the war summit is organized in my town, Madrid, we are organizing the Peace Summit “No To NATO.”

We must explain the important elements that are under dispute based on our own roadmap—without losing ourselves, without creating “us” and “others,” without looking what makes us different through a magnifying glass, but rather organizing ourselves based on what we can say together. And we must say that following precisely our roadmap, which shows a world in which the focus must change from money to people’s lives and the planet, in which violence is understood in a structural manner.

What we want is to disrupt the bases that create this violent system. Therefore, we have responsibilities and megaphones to say that war is not peace, militarization does not stop war, and the so-called militarized solidarity with Ukraine itself is a contradiction. And of course, we must say that war and destruction are not inevitable. War is a tool to maintain domination, exploitation, and fear, and as feminists we always have a responsibility with the oppressed.

As we say in Spain, we, as feminists, “have a plan”: we are going to change the system. Because it is the base of the iceberg that produces violence. Capitalism and patriarchy use war against us. The system produces destruction and war and they don’t know how to solve it, so it is up to us to pick up the pieces and be the life jacket of everyday life. Social reproduction falls on our shoulders. In contexts of war, hunger, and poverty, this increases manyfold. We, feminists, must give meaning, strategy, and joint political organization to active peace, one that stands up for the interests of the “collateral damages” or the “acceptable losses,” as they call us. Feminist economy especially offers several clues as to how to move forward toward a system of peace and social justice.

A longstanding feminist demand in Spanish demonstrations is “neither war that destroys us nor peace that oppresses us.” That is because we understand that peace is not simply a ceasefire. It is speaking about lasting peace, which is not included in capitalism. Speaking of peace and feminism, therefore, is not simply about making statements—it is about building militant peace, an active peace, an organized struggle to move shake these thought structures and power that build a consensus according to which some lives matter and some don’t.

As I said earlier, in this context, we do not take a leap in a void. In recent years, we have been working together to build a global cry, but we also must remember. Therefore, we must go back and read women who are our points of reference. We cannot forget them. I invite you to reflect hand in hand with Clara Zetkin e Rosa Luxemburg, to read feminist discussions held during World War I. I’ll look back at a quote by Clara Zetkin at the International Socialist Women’s Conference, which took place in March 1915:

There are many recurrent ingredients in terms of economic interests. Now our governments in Europe impose sanctions on Russia, buy gas from the United States, and the people cannot afford it, the arms industry wins again, new refugees and new lives of hunger and misery are created, hatred emerges, “Russiaphobia” emerges, Tchaikovsky’s Swan Lake is censored, eyes close to fascism. We have been here before.

We must recall that it was exactly on March 8 that women workers from Petrograd took to the streets to cry for bread and peace. It was 1917. What came after marked the history of the world. In 1915, more than one thousand feminists came together in the Hague to stop World War I. They also denounced the consequences of the Treaty of Versailles. Millions of women have marched in the 20th century: in Vietnam, Algeria, Afghanistan, Iraq, Palestine, South Africa… And not long ago, mothers have march in the Plaza de Mayo, in Buenos Aires, so that no one would forget their children who had been murdered.

All this history of feminist struggle for lasting peace has taught us that peace is full of courage and struggle. Onward, sisters, let us fight for a peace that is not just a ceasefire, but rather a transformation of this violent world into solidarity, mutual respect, equality, rights, cooperation, and a sustainable planet. Weapons will not save us. We will. I will see you in Madrid, at the Peace Summit.

Nora García has a fine arts degree and lives in Madrid, where she conducts feminist activist work. She is a member of the European secretariat of the International People’s Assembly (IPA) and the international coordination of the No Cold War platform. She is in charge of Africa affairs with the International Area of the Communist Party of Spain and of the Women’s Area of the Izquierda Unida (United Left) in Madrid. This article is an edited version of her speech during the panel “Women Against War” held by Capire on March 28th, 2022.