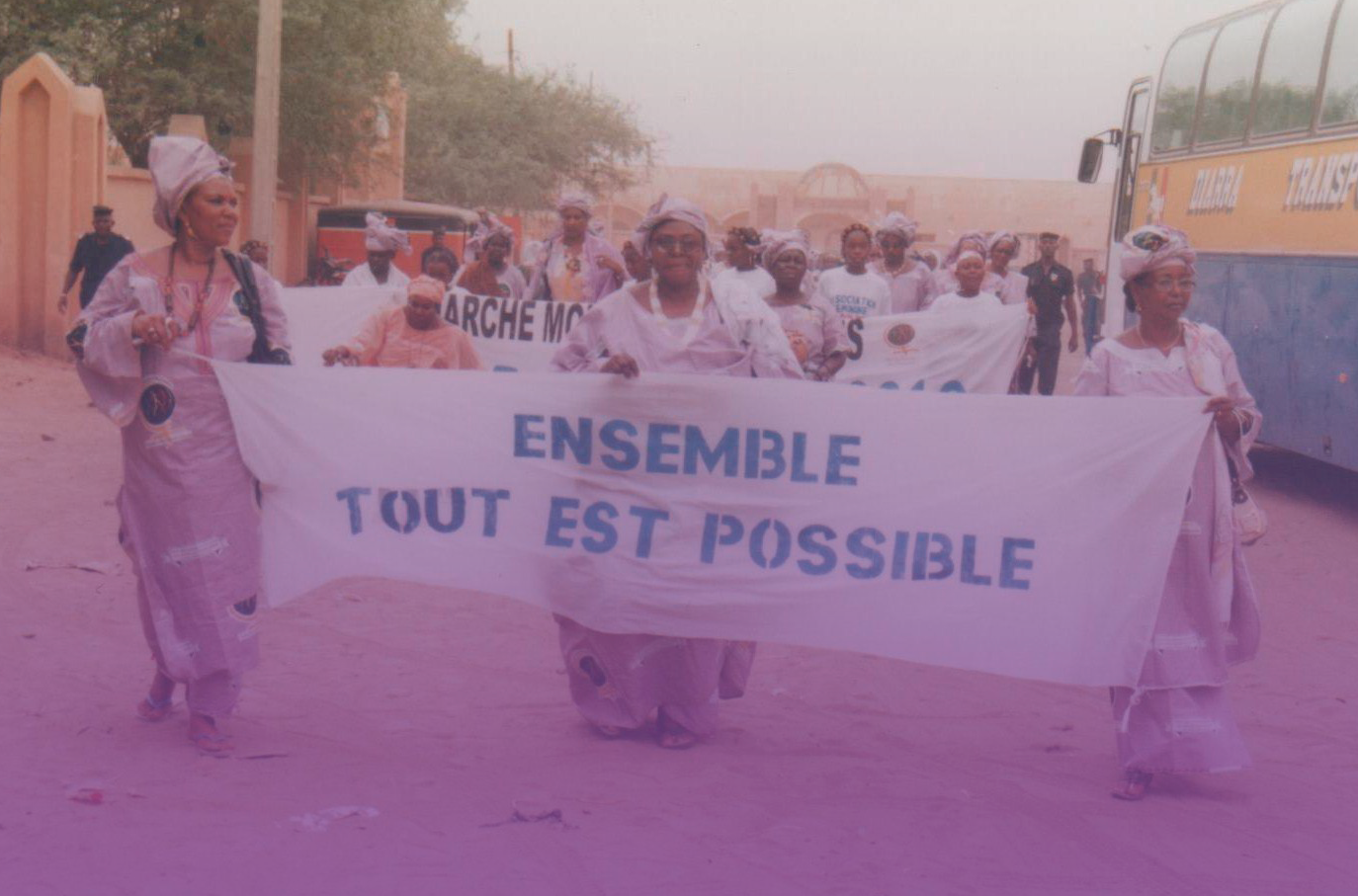 The Struggles for Peace and Against Terrorism in Mali

Nana Aïcha looks into the World March of Women’s experience in the struggle for peace, exposing the situation of the ongoing war in Mali

In Mali and other countries in the region, the issue of war and armed conflicts is a daily issue. For a long time, the World March of Women has been concerned about peace and demilitarization. It has conducted a lot of work on this matter, and I have been involved on this level as well. That was how we took part in solidarity actions in Congo to support women in conflict zones. Unfortunately, nearly two years after that, my country also started to witness the same situation as the Democratic Republic of Congo.

Mali is at war since 2012. It is a very difficult war to manage, because it is not a conventional war. We are talking about jihadists—religious extremists—, terrorists who trade guns and drugs. They are enemies we can’t see, but who are in our territory. Our army is striving to fight them, but that is not easy at all, because they don’t know where to find them. On the other hand, the terrorists know where the Mali army is. Because of this situation, today in Mali we have more than 30,000 soldiers from all countries.

We have Operation Barkhane, led by the French military, and military from several European Union countries. There is the MINUSMA [United Nations Multidimensional Integrated Stabilization Mission in Mali], the Blue Helmets, as they are called, and a military group with soldiers from dozens of African, European, and Asian countries. But despite this huge military presence and many resources, the war continues. Instead of improving security, we are experiencing the opposite. In the beginning, when foreign troops first came to Mali, the war was happening in areas in the north, mostly desert areas.

From 2012 to this day—it’s 2022—, insecurity has moved across the central area of the country all the way to the south. The entire Mali region has been affected. This is what makes the population unsure about why foreign troops are necessary. They argue that the Mali army cannot handle the conflict on their own. And it is true. But the foreign troops that are here and have more resources than the Mali army are also unable to handle the situation.

We now have villages that have vanished from the map. The terrorists, the jihadists are coming; they catch people off guard. They raid villages and set them on fire, burn houses with people in them. They burn barns where families store their provisions for the year, when the harvest has already been stored. When the crops are ready for harvesting, they burn the fields. Yet we have all these troops in Mali, with their big resources. People are wondering what is the point of them.

In this political conflict between Mali and France, people say that the French in Mali are actually the terrorists. They are the ones arming the terrorists, training them to handle the guns. Because every time the terrorists come to attack, the French disappear. We can’t see them anymore, we don’t know where they go. They came and created chaos, but we don’t know where they are anymore. It is a vast area, but there are military drones and aircrafts. They can see what is going on through satellite images, they can watch anyone’s movements. We wonder why they can’t see the terrorists moving toward villages to attack them. This means they are complicit. That is why France’s presence is rejected in Mali.

Now we have reached a point in which France has decided to withdraw their troops. There has been a major diplomatic dispute when Mali told the French ambassador to go back to his country. Other countries are also withdrawing their troops. Malians are happy about it, because their presence is not a solution, and the World March of Women has always denounced this situation. People acknowledge that the Blue Helmets did not resolve the situation. They have been here fore more than twenty years.

Therefore, the approach of the World March of Women and its stance on increased militarization is real. The March must continue to work on these matters, because right now, instead of being demilitarized, they have effectively become overmilitarized. For example, 22 percent of the Mali state budget—which is already pretty small—is allocated for weapons. And where do men buy guns? They buy guns from these countries that claim to help us fight this conflict. If they have those interests, will they ever want the war to be over? Mali, Burkina Faso, and Niger are facing the same situation.

We don’t have the right to buy weapons from wherever we want, let alone choose the type of weapons we want. We have a military deal with France that forces us to ask them for permission every time we want to buy guns. France decides what we should and should not buy. This is why Malians are angry now and call for a review of this deal, which they reject. Malian authorities consider that this deal is no longer valid, because they have proposed improvements, but France has never responded to these proposals.

As a result, we resort to other partners to help us fight terrorism. Particularly Russia, which, since our independence, has always been a partner of Mali in terms of military and development. In terms of education, we have many Malians studying there. The presence of Russia has also created another problem between Mali and France. France has decided that Russia could not come, but we have decided it would come. From now on, we are going to call the partner that can help us end this terror problem in Mali.

Women with the March work in collaboration with other organizations. In our context, one organization cannot work alone. We have come together to face this and we will be able to fight as women against terrorism in Mali. Moreover, there is the socio-political situation we are experiencing. There is a regime change. The people took to the streets to demand the resignation of the elected president. Movements have intensified their organization and the army put an end to the power of the elected president.

Right now, we are living under a military transition. A situation that the Malian population has gladly welcomed and followed because there is a military man running the country. He was not elected. But, because of the actions he proposes every day since he has been there, Malians feel that their interests are being considered, and the country is being managed as they wish.

On the other hand, the ECOWAS [Economic Community of West African States], a sub-regional organization of which Mali is a member, has imposed sanctions against the country. It has closed the borders with all ECOWAS members, which are 15 countries, managed Mali’s revenues in banks, and suspended Malians’ participation in ECOWAS bodies. So this is our situation now. Fortunately for Mali, Mauritania is not an ECOWAS member, as it has opted out of it years ago. Therefore, Mauritania has not closed its borders to us. Similarly to Mali, Guinea, which has also suffered a coup and is facing a similar situation, argues that it is not closing its borders to us.

Mali is a landlocked country. We are now using the ports of Guinea and Mauritania to bring products in. Mali has seven neighboring countries, and they are all members of the ECOWAS. But the populations of these countries support Mali. They are also organizing movements, holding demonstrations, holding meetings to support the people of Mali. A group of Senegalese men and women has left Dakar (more than 1300 kilometers from Bamaco) and walked all the way to Bamaco as a sign of solidarity with and support to the people of Mali. We have had a great meeting and women have mobilized to officially welcome them.

Nana Aïcha is a member of the World March of Women in Mali.

This article is an edited version of her intervention at the dialogue “Women confront the wars” held by Capire on March 28, 2022.