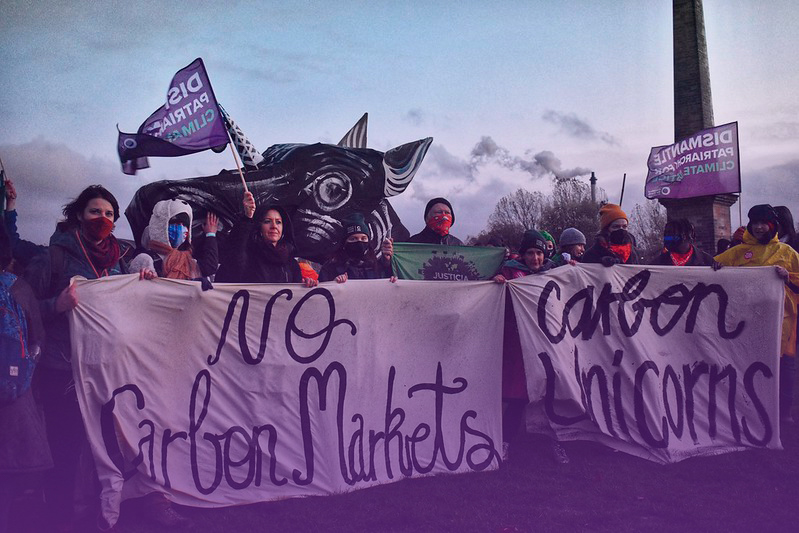 The 26th United Nations Climate Change Conference of the Parties (COP26) was concluded a few weeks ago. The big expectation around the event was about finalizing the Paris Agreement Rulebook, a document that now guides how signatory countries must behave in the global climate regime. Social movements have historically criticized the way how the UN system addresses such important topics, as it puts corporate power and the interests of capital first, to the detriment of grassroots participation. This has never been so true: this year, if all representatives of the oil and gas industry at COP26 were from the same country, they would be the biggest official delegation at the event.

Moreover, finalizing the Paris Agreement Rulebook sparks off a new political moment, aiming to create the conditions for implementing a new green economy, largely based on electrification, digital solutions, and the financialization of nature. A low carbon development agenda then comes into play in which states and public projects are not taking the main role, but rather it is the private sector that is mostly calling the shots about the pathways in this new moment. Most countries in the global South have had their economies shaken by the Covid-19 crisis, and in this scenario they see themselves forced to take any type of investment they can to recover.

The new architecture of the climate system is based on emission offset mechanisms, which are very similar to the mechanisms that are familiar to movements and communities affected by the green economy, such as the REDD+ projects. The consensus around Article 6 of the Paris Agreement has laid the foundations for creating an international carbon market. What this actually means is that rich countries are granted a “license to pollute” as long as they offset their emissions. This kind of reasoning is the basis of what has been called “net zero” goal: it is not about demanding countries to dramatically reduce their emissions to the point of ending them—which would affect important industries of corporate power, such as oil and gas companies—, but rather require that all emissions are somehow offset.

What is not made clear is that this offset is actually carried out in real places. What negotiations simply see as “carbon sinks” are, in reality, forests and territories occupied by peoples and communities whose ways of living are based on these places, as they have long cared for them and have been cared for by them. More and more carbon capture projects are likely to be developed for territories in the global South to enter the emissions business. This market is not likely to be restricted to forests, as it also designs plans for agriculture, in the form of agriculture 4.0, which is advertised as an efficient way of capturing carbon.

Seeing nature as simply a “sink” is the basis of what has been called “nature-based solutions,” an umbrella term for all offset mechanisms based on carbon capture in forests, oceans, or soil.

As the demand for offsetting increases, agricultural, energy, and mining frontiers are likely to expand in territories in the South, under this offsetting greenwashing. It is no coincidence that movements are calling these “solutions” “nature-based spoliation.” Big corporations pose a risk to food sovereignty in different territories, while increasing their control over land and surveillance.

For now, the so-called nature-based solutions have not been mentioned specifically in the Paris Agreement, but there is known pressure to have it established as the climate business model in the future. We have heard this name being mentioned at the Food Systems Summit as well, which, similarly to COP26, has been a UN system space with less and less democratic participation and more and more influence by companies. It will probably be heard in future meetings of the Convention on Biological Diversity. Regarding food systems, “climate-smart agriculture,” which supposedly can store more carbon in the soil, is advertised as the agriculture of the future.

While all these new businesses are created, there is no real commitment in which corporations and the countries of the North are held accountable for the effects of climate change that are already being felt, such as catastrophes resulting from sea level rise. Adapting to climate change and being able to promote actual transition from the current production and consumption model requires funding. The countries that have been historically responsible for climate change should account for this funding, based on the principle of common but differentiated responsibilities, according to which the countries that have contributed the most to climate change over the course of history (the most industrialized countries) should provide the resources to fund the necessary actions to reduce its damages. In the COP model, which has been completely captured by corporate power, even the agenda of extreme events turns into business. It is an agenda that has been captured by the financial market, in the form of insurance companies, which do business by forecasting tragedies.

The Peoples Point the Way Out of the Climate Crisis

Given how serious the climate issue is, an energy transition and a transition of the production and consumption model is an undeniably pressing matter. But the point is, which will be the basis for this transition. The proposal by those who represent capital is based on even more power concentration in the hands of corporations and some states in the global North.

COP26 underscored the big impact of methane gas on climate change. But an issue that could be addressed in terms of defunding the cattle industry—which is not only the key driver of methane emissions, which account for significant greenhouse gas emissions, but also of deforestation, contamination, and human rights violations across the world—turns into yet another business opportunity. The United States has made a commitment to launch a high-resolution satellite in 2022 to generate data on methane emissions across the planet. Funnily enough, these technologies are introduced as magical solutions while overlooking their huge military surveillance potential over the entire global territory. It seems that all military and surveillance power of imperialism can be justified in the name of the climate.

On the other hand, we learn from social movements that a transition must be conducted through the paradigm of just transition, which is connected with appreciating the workers of sectors that will face defunding and changes in the logic of production and consumption of society as a whole. This change can only come from anti-capitalist struggle and popular sovereignty.

Taking the climate issue seriously requires reorganizing production. From feminist economy, we have clues about how this should go: by appreciating the economic sectors and activities that actually provide sustainability to life, shifting the focus of our lives from the market, strengthening democratic and grassroots processes.

Similarly to what happened at the food systems counter-summit, the People’s Summit took place concurrently with COP26 with huge grassroots participation. While companies are increasingly calling the shots within the system, more and more people are pressingly mobilizing on the streets, networks, and territories, to create a different relationship with nature. The answers provided by movements include agroecology; more grassroots power and less corporate power; centering more on the relevance of labor—especially women’s invisible labor—in the sustainability of life; and technological sovereignty instead of the technicist fetish that claims that some magical solution, like geoengineering, could save us.

It is no surprise that corporate power is creating increasingly more false solutions for the climate crisis. Especially in a moment of crisis such as the one we are experiencing today, the market logic is based on expanding its frontiers toward more realms of life.

It is true that movements and organizations have less and less space within the UN system to be part of negotiations. But it is also true that we have never believed that this would be the place to build a new society. This is why fighting false solutions includes strengthening our historical demands, which this moment in history calls us to take on, such as demarcation and titling of traditional communities, strengthening agroecology, just transition, and food and energy sovereignty.

Natália Lobo is an agroecologist and a World March of Women Brazil militant.

Edition by Helena Zelic
Translated from Portuguese by Aline Scátola