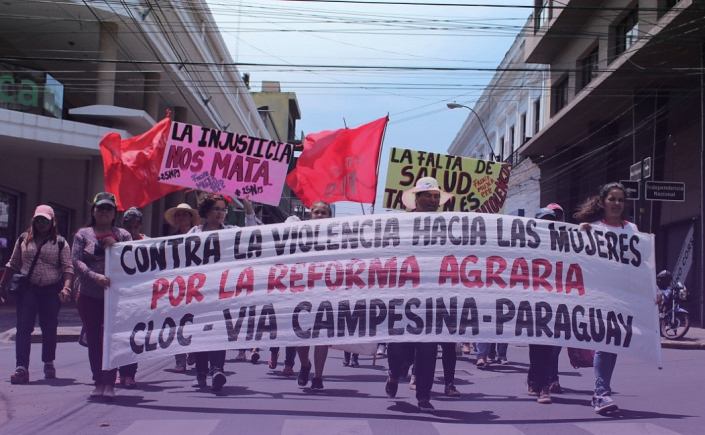 Perla Álvarez, from CLOC-Vía Campesina, writes about food sovereignty as resistance and practices of peasants and indigenous movements.

Whether in the movement or outside of it, the word “agribusiness” brings to mind instant associations like “soybeans,” “Brazil,” or “the Mennonites¹.” Why? When did this word first enter common parlance? What are we actually saying when we use it? The term “business” is not an accidental component of this portmanteau word; on the contrary, it is central to the whole concept.

Agribusiness embodies a different conception of the earth than the one upheld by peasants and Indigenous peoples. For agribusiness, the earth is a commodity, a product to be bought and sold and made profitable, to be commercially exploited. It is no longer seen as tekoha, the place where we are, where we live, produce, and reproduce. Where we come into our own, in which our culture is rooted. No: for agribusiness, the earth and its capacity to support life are negotiable.

They are measured in terms of uniformity, not diversity; in tonnes of grain, not seeds; in productivity, not safety; in dollars, not life; in contour lines, not disappearing species of trees and birds. That is agribusiness: the capitalist exploitation of the earth. Extracting from it anything that can generate a profit in record time. Agribusiness subjects the earth to “inhuman” treatment because for it, agriculture has nothing to do with humanity.

What’s human about chemical fertilization, constant tillage with heavy machinery, backbreaking labour, the spraying of toxic compounds, an unswerving routine? That’s not how we provide food to our bodies or care for our health, is it? But when agribusiness hears the word “food”, it thinks in terms of commodities. For agribusiness, the earth is not a living thing but a machine, and to be treated as such.

It has been that way ever since capitalism set foot on the countryside. True, these tendencies were there earlier, but timidly, at various stages of production. When merchants refused to pay fair prices, when they started selling seeds, or when they presented themselves as the peasants’ allies and started hawking poisons. With the rise of agribusiness, this mentality invaded the countryside and stealthily changed everything, even the way we think.

What do I mean by “changed the way we think”? In general, when we talk of agribusiness, we refer to large commercial plantations. But we also see its effects in the luxury vans cruising through villages, in fantastical-looking, robot-like tractors roaming the streets and kicking up so much dust we have to stay indoors. We see the elements of “success” and we think to ourselves: “so much money made in so little time… Why work so hard, if poisons and machines will make you rich?”.

We think that maybe, if we emulate this model, we’ll get rich too. Or we take a stab at it and become separated from our communities; we stop being communitarians and start being landowners. We start using “weed killers” so we can stop hoeing; we buy genetically modified seeds; we go into debt to buy biotoxins; we get someone to harrow so we don’t have to plough. We lease tractors because we can’t afford to buy them, and can’t get a bank loan without giving our land as collateral (but we don’t have the deed).

It planted genetically modified seeds in the countryside and planted new ideas in our heads. As a complex process of rural capitalist accumulation, agribusiness applies costly, high-tech recipes (machinery, hybrid or GM seeds, biotoxins, trucks, etc). It looks easy and attractive on the surface, and that’s how it took hold of our minds.

It has occupied the countryside, displacing communities, and it has occupied our thoughts, displacing knowledge. What we knew became old hat, a thing of the past, for Luddites only. The result, for rural peoples, for peasant and Indigenous communities, has been the depopulation of the countryside, the disappearance of wild land, the lost seed varieties, and the changes in food customs. And we didn’t turn into the newriches, not by a long shot.

Instead we were impoverished. We lost our land, and had our knowledge taken from us. Only the old rich kept getting richer, while a few others managed to sweep up some of the crumbs. And all this is by design: the purpose of agribusiness isn’t to enrich us but to fill the coffers of investment banks and multinationals.

In the face of this threat, peasants and Indigenous peoples developed, 25 years ago, a new concept known as food sovereignty. It started from a place of resistance, and continues today with practices of resilience in a time of crisis. We define food sovereignty as the collective right of peoples to determine our own food systems: how to grow food, what to grow, and with whom.

But it is also a right possessed by anyone who eats food: the right to know what they are eating, where it comes from, how it was grown, under what conditions. It is the right to fair trade, to prices based on actual work done. And finally, it is the right of nature and the earth to be respected as givers of life, and of us to act as their stewards.

Food sovereignty is a demand put forward by rural peoples, but it also involves city dwellers. It is a highly complex concept, yet one that is easy to understand. It is bound up with other historical demands of the peasant movement and incorporates Indigenous peoples’ knowledge.

It begins with the earth, the source of everything. It treats the earth as a commons, not a commodity. The part of that commons on which we live, produce, and reproduce is called the territory. The territory is called tekoha, the place where we find ourselves. The territory includes productive land, the ground we live on, the natural and cultural environment, knowledge, memories, and dreams. The territory is where we produce food for the body and the soul.

It follows that food sovereignty must include agrarian reform. A new kind of it: not limited to land distribution but extending to restitution and reconstruction of the territory, restoration of the environment, recovery of plant varieties and of illegally confiscated and redistributed land, production of healthy and nutritious food, stewardship of nature, community-building, self-determination. This land reform must revolve around empowering people to care for the territory and for one another.

For this to be accomplished, we must organize in both city and country for a return to the land; we must go back to planting dignity and to harvesting hope and solidarity. And the pandemic has brought this imperative home to us with renewed force. Although we have little, what abundance we’ve been given by Ñande Yvy, our land, and how much more we would be given if we took care of her! Indeed, only with food sovereignty can both parties care for one another: the earth for us and we for the earth.

Also food sovereignty must include agroecology as a production model contrasting with agribusiness, which latter is based on extensive, chemically intensive monoculture of genetically modified varieties—a cumbersome technology highly reliant on fossil fuels and other inputs. Agroecology proposes both to recover ancestral knowledge and to incorporate new knowledge compatible with the protection of the environment, nature, and people.

Agroecology is not just a mode of production but a design for living. It incorporates the practice and theory of permaculture with a view to preserving the well-being of people and nature in all contexts. It must, in addition, include a form of feminism rooted in peasant, Indigenous, and people’s identities. Not only does food sovereignty acknowledge the fundamental role played by women in securing the right to life, health, and dignity, but it also makes women central agents of change. It foregrounds the struggle against violence through collective working, learning from nature, and returning the favour by taking care of her.

As a concept, food sovereignty is a contribution by the peasants of the world to people’s attempts to overcome the limitations of the FAO concept of food security. Since food is both a political and a cultural fact, the right to food cannot be actualized without sovereignty and autonomy. Consequently, states and governments must do their part to guarantee, promote, and protect food sovereignty.

All these things dictate that we must consolidate our organizing at every level. From the community to the nation, if we are to win and entrench the right to food sovereignty as the most fundamental of peasants’ rights, now enshrined in the UNDROP although our country, Paraguay, has yet to ratify the declaration. This declaration has become an instrument in the struggle to defend food sovereignty, and the right to food as such. Food sovereignty enables us to eat according to our food customs; with it, we can recover the knowledge and flavours of our grandmothers.

¹ The Mennonites are members of certain Christian groups originally from northern Germany and the Netherlands, who were part of the Protest Reformation in the 16th century. In Paraguay, they contribute heavily to the country’s agriculture, particularly in the monoculture of maize and soybeans. They reportedly promote deforestation, change the local environmental balance, and pollute the water with the use of toxic chemicals.