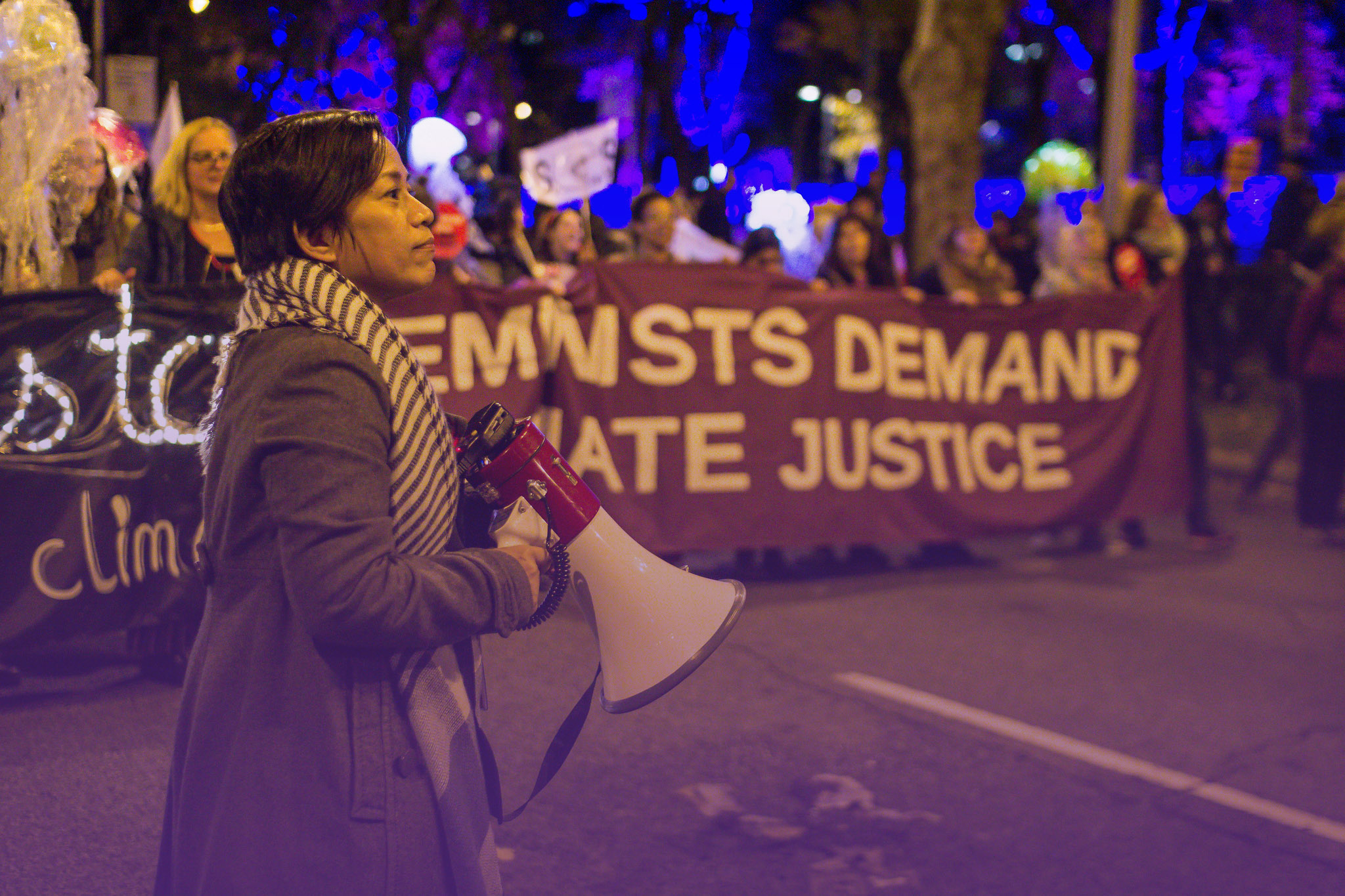 The feminist struggle for a different organization of work and for a harmonious relationship with nature also requires a just transition in the energy model.

I will briefly share some points about feminist just energy transition based on the collective knowledge and experiences that are being put forth by our movements around the globe. Whenever we think about how to relate the experiences we have now to the political project of the future we want to build, feminist and solidarity economy is very useful and, more than that, necessary.

We don’t have the complete answer for that, but, from our struggles, we know that the current energy system is built on colonial imperialist racist patriarchal and capitalist values and practices that are there to ensure profit-accumulation for a few. So challenging this involves rethinking and redesigning the energy system as part of a political project to place reproduction, care, and the struggle against the sexual division of labor at the center.

What would the energy system looks like if it was organized by these values?

In turn, this would require a lot of grassroots political organization and collective horizontal democratic political processes of decision-making. This would require thinking and transforming the role of the public sphere, promoting an approach to energy as a common good. Dialogue among allied movements is key to ensuring that feminist just energy transition will be part of a full political project of change.

Discussions about the economy and politics in the framework of a feminist and just energy transition are connected to how labor is advanced and what types of human-nature relations shape energy transition. There are two important principles in this regard: interdependence (acknowledging and valuing the dependence among human beings) and ecodependence (acknowledging human dependency on nature).

What approaches to labor and nature does a feminist and just energy transition promote?

Part of the answer is not only acknowledging processes of territorial dispossession that continue to happen nowadays, but also valuing indigenous and grassroots knowledges and other practices that could be model projects to inspire us. In this sense, we can learn for instance from agroecology, from permaculture, from indigenous practices of care to communities.

All of these imply also re-localizing the work at the community level, focusing on making sure that the energy system is addressing the basic needs of people – as opposed to the current commodified way of approaching access to energy and other basic rights. It implies also stopping to expand the frontiers of extraction of the so-called “low carbon” minerals, such as lithium, copper and cobalt, that are key to the capitalist unjust energy transition. When we acknowledge that we are ecodependent and interdependent, building huge hydroelectric dams aimed at supplying energy to agribusiness or mining operations, for instance, becomes very problematic.

Unity toward in a grassroots agenda

It is important that we build consensus among our allied movements about what a true energy transition looks like from the perspectives of socio-economic justice and gender justice as well. Because the recovery agenda for the post-covid era of international organizations (such as the World Bank and corporations that control states) is already very clearly stated.

Their strategy is to greenwash their business as usual, to sell a very problematic conception energy transition in capitalist terms as the only transition possible. This mainstream approach sees energy transition as a business opportunity, relying heavily on technological fixes, including digital technologies.

It is essential to build agreements about what principles and practices guide an anti-capitalist, anti-colonial, anti-racist feminist just energy transition. Let’s continue bringing the feminist debate to every space, including inside our own organizations.

Marianna Fernandes lives in Switzerland and is a member of the International Committee of the World March of Women representing Europe. This text is an edited version of her contribution to “If it’s not feminist, it’s not just”, the Friends of the Earth International (FoEI) workshop on June 18, 2021, which was part of the program of the online conference “5 For The Climate”, organized by Friends of the Earth Germany (BUND) and Independent Institute for Environmental Issues (UfU).