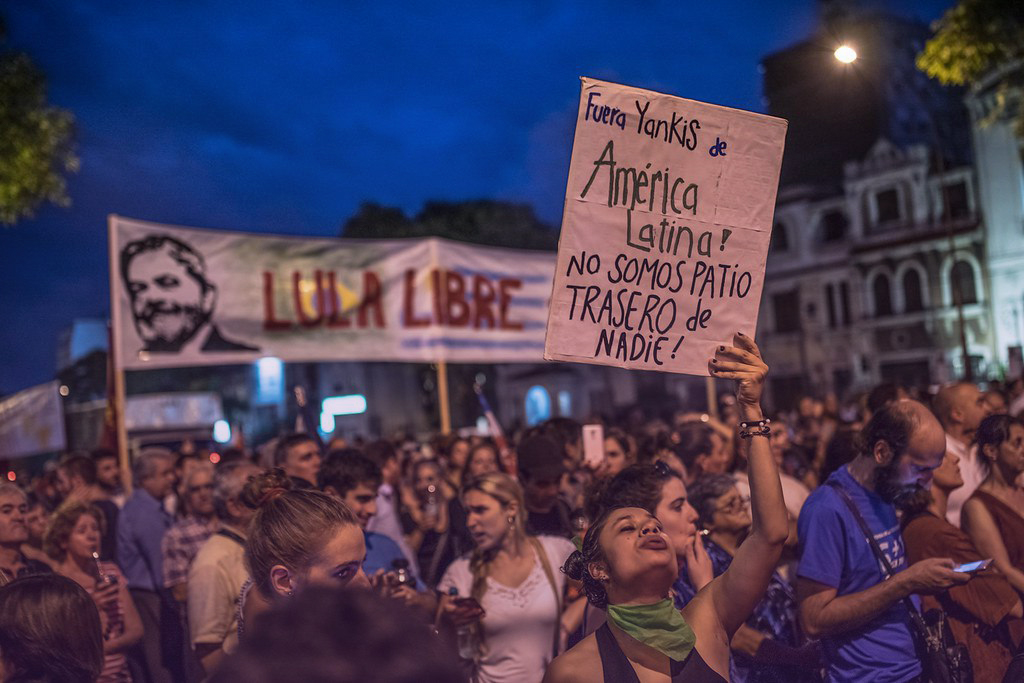 Transnational corporations and free trade agreements hide behind sustainability and gender equality discourses to increase the power of the market over life.

In recent decades, we have witnessed an increasingly accelerating process of capitalist globalization, which resulted in a production reorganization at a global level, as well as the growing sophistication of exploitation and power structures in and around production processes. In addition to this process, there are new reconfigurations taking place today because of the coronavirus pandemic, which has dramatically accelerated trends that had been emerging in recent years.

We may characterize this neoliberal phase of capitalist globalization by the elimination of national borders for the movement and consumption of goods, services, and capital flows. Also, by the conspicuous and constant pressure to dismantle and make the State disappear as the guarantor of public good, as well as by the privatization and commodification of social relationships and common goods.

Transnational companies are the primary agents epitomizing the capitalist system: they organize the world according to their interests to further their profits, take on themselves the power to reproduce capitalist accumulation one phase after the other, and extract, from each phase, the synthesis to continue to lead the way of this accumulation, strategically distancing themselves from any costs and accountability. They hold a position with growing concentration of power and privilege, continuously expanding and controlling more territories, and establishing new forms of occupation. They control production on a global scale and decide the routes of exploitation and plundering of nature and the working class. Understanding the role that transnational corporations play is key to locate the place and influence of free trade agendas.

Transnational corporations exert pressure to make sure the changes in the organization of global production are crystallized as rules that will aggravate investment and trade liberalization as well as the expansion of capital over what is public. The ways transnational corporations build power and domination are connected to their growing power that is defining and/or challenging the rules established by States, pushing to eliminate the norms that contribute to protect natural goods and the fundamental rights grounded in these goods, including the right to water, land, seeds, etc. On the one hand, there is a process of deregulation that eliminates regulations conceived for the common good, while, on the other, new rules are imposed to make way for the privatization of nature and public services, or for investments that destroy the ecological systems that make life possible, among others.

The agendas of investment and trade liberalization, which translate as neoliberal trade agreements, have a relatively recent history, but their impact is enormous. Their evolution over the years reflects the ways transnational capital has offered to overcome systemic crises created by transnational capital itself, and even to profit off of them and make changes to increase its profit rates and expand its possibilities of accumulation, advancing over new areas of life in society and nature.

Today, we find the same kinds of clauses and commitments in virtually every trade agreement that is negotiated, renegotiated, or that has been recently signed.

Free trade agendas have evolved over time, following the changes in the organization of production at a global level. This is not neutral and it has an impact on life in society, public policies, development strategies, and human rights.

These agendas shift the corporate paradigm toward regulating state-owned enterprises and evade the social function of public services. By imposing profit-driven commercial perspectives on state-run services and companies, rights are violated, especially in terms of access and affordability. By disregarding this social function, the key role that public services play in safeguarding human rights is lost.

There are multiple ways that the shift to a corporate paradigm in public services and state-run enterprises can affect women. And to understand these impacts, we must consider that gender inequality is a structural aspect of the capitalist system, in which women occupy subordinate roles in the sexual division of labor: they have the lowest paying jobs and enjoy the worst health and safety conditions, and they shoulder care responsibilities to a greater extent. This is also closely related to some public services, such as health care, education, and food. To safeguard the sustainability of life, we must rely on the State’s active and effective role, providing comprehensive, universal, accessible, inclusive, and public policies and services. The free trade agendas put this at risk. Social protection systems are important pieces of the reproduction of life, because they aim to reduce or eliminate inequalities, create opportunities for vulnerable populations, and meet needs and fundamental rights.

In countries where the access to public services for water and sanitation is not safeguarded, it’s women who bear the responsibility of water provision, carrying water over long distances for hygiene and cooking. Water and sanitation also introduce an environmental dimension, because the territories affected by pollution and the implementation of large-scale production enterprises pollute air and soil, deteriorate the quality and quantity of water available, and have an impact on biodiversity.

Commercial agendas are starting to introduce legal frameworks for “new” commercial operations. The digital economy, including electronic commerce rules, is one of the most striking aspects of the current state of the evolution of these agendas. These contents crystallize new rules based on changes in the organization of production at a global level. The contents of these agendas aim to eliminate existing regulations or fundamentally stop the implementation of new regulations and enforcement agencies.

Working through apps, a typical thing in the digital economy, carries strong implications in terms of increasing job precariousness and removing rights protections. Women are the most severely impacted by this reality, because they work under worse conditions and have fewer opportunities to secure decent jobs.

The paradigm of entrepreneurship provides a false idea of independence from the so-called “stiffness” of the more traditional and subordinate jobs. However, the idea of defining your own working hours, working from the comfort of your own home, or making “as much as you want” is extremely misleading and dangerous, because it diverts responsibility away from the companies that should comply with labor rights. This paradigm targets primarily women, offering it as an alternative to enter the job market, arguing that they could work from home and attend to domestic and care work at the same time. Claiming that “housework” is “a woman’s problem” only reinforces the traditional sexual division of labor. Meanwhile, it underlines how underappreciated reproductive tasks are, arguing that “being home” is all it takes to do them. Seeing technology as a solution for this “women’s problem” does not addresses gender inequality, but rather aggravates it by making it look as if it were only “natural.”

Initiatives that aim to “empower” women to become leading figures by using technology or developing their own business avoid directly addressing the inequalities that women face in their everyday lives. These initiatives assume a false equity and therefore export false solutions.

One concerning aspect that must be taken into consideration regarding intellectual property is the right to health, due to women’s particular use of healthcare services. Considering what has been analyzed for public services and companies, the market control over medications, their manufacturing, development, and innovation pose risks in terms of access and the safeguard of the right to health. They could even violate certain rights that are sanctioned and protected by law to secure women’s autonomy and decisions over their own bodies. Amid a health emergency such as the one we are currently experiencing, it is crucial to consider the role of intellectual property and the tensions created by the appropriation of and control over knowledge by transnational corporations and the global North.

The free trade agendas have also incorporated the gender agenda. However, instead of really incorporating it, what they do is purplewash trade agreements that have major implications for women’s lives. This purplewashing aims to show the alleged benefits of free trade for women, presenting a narrative of false solutions for them.

The Gender and Trade chapters are part of the “soft” political commitments that trade agreements incorporate. Combined with the chapters on “Sustainable Development and Trade” or the chapters on employment topics (“Labor Chapter”), they try to paint a more humane picture for these instruments by including agendas that are part of the lively debates happening in our societies. Meanwhile, they are the expression of a narrative that privileges market solutions to the detriment of cooperative and community-based solutions.

The momentum that the feminist agenda has gained in our countries is undeniable. The terrible reality of systematic violence suffered by women—a direct and indirect consequence of the inequality that supports the system—is completely invisible to the Gender and Trade chapters. Even in the cases where inequality and violence are mentioned, their causes are not clearly stated, and the binding mechanisms that address the ways these instruments will contribute (or not) to change women’s realities are not considered. Therefore, these agendas are merely accessories, appealing from the point of view of the discourse, but completely innocuous in terms of their actual impact.

Commercial agendas disregard their impacts on areas that are not related to the indicators of classical micro- and macroeconomics. Measures and estimates showing the benefits of these agendas never take into consideration their social impacts in a broader, more comprehensive sense of the term: the way these agendas will change people’s lives beyond statistics in terms of jobs or increase the gross domestic product is not quantified. And the negative impacts strongly associated with those who are most vulnerable to them—the poor, rural communities, women, Indigenous people, children, and others—are rendered invisible.

This article is based on three recent publications (available in Spanish) addressing these issues: “The playbook of the new commercial agendas and their impacts: there is no place for environmental justice on the transnational capital agenda,” “The free trade agendas and their impacts for women: notes about building grassroots feminism,” and “The systemic power exercised by transnational corporations and the free trade agendas: notes to building mobilization and resistance.”

Natalia Carrau is a member of REDES—Friends of the Earth Uruguay. She has a degree in political science and a specialist degree in commercial agendas, transnational corporations, and investments.