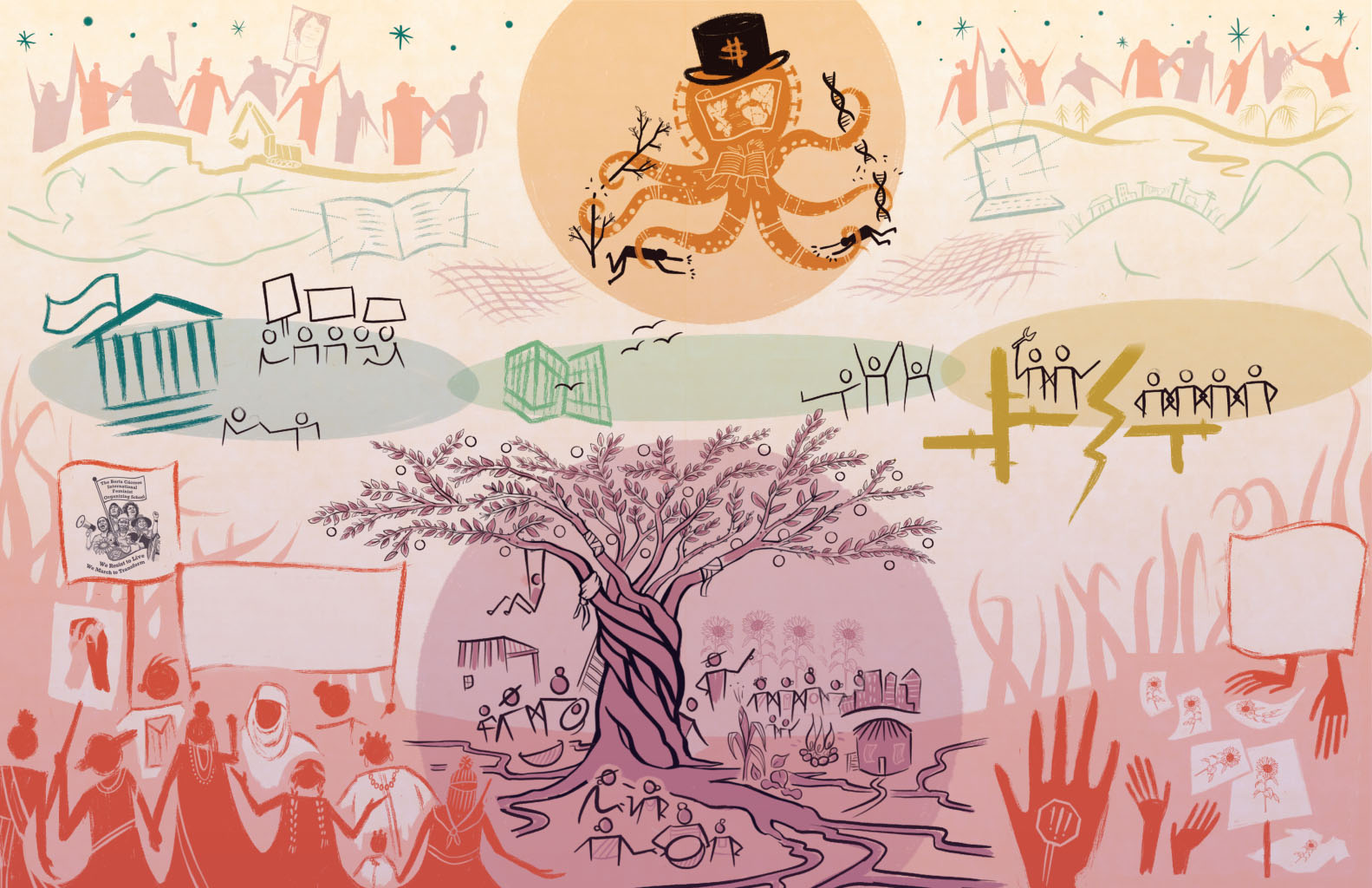 #FeministSchool: Political Education in Movement To Change the World

For two days every two weeks since April 5th, sisters and comrades from across the planet have gathered to take part in an intense process of feminist education. We reported every meeting of the Berta Cáceres International Feminist Organizing School here at Capire.

The closing of the Feminist School, on July 5th and 6th, was powerful and extremely moving. The grounding spirituality activity took us to the streets, connected us with our ability to mobilize in every part of the world, internationally connected. We looked back at Bertita’s words, because we are no longer the same as we were when we first heard them at the launch of the School. Grassroots education, language and spirituality, youth organizing, and grassroots radio and communication are part of the legacy of Berta Cáceres and of our shared resistance.

The synthesis of previous discussions on movement building guided our reflection during these two last days. The political perspective of self-organizing grassroots feminism, our strategies, and everyday tasks were introduced in the video synthesis (below):

During the panel, we delved deep into our views on building political actors. Carmen Diaz, from Mexico, shared the elements of the plural grassroots feminist political actor, articulating critical consciousness, an interpretation of reality in tandem with the desire for change, and collective action for change, guided by our emancipatory project for society.

From the political identity of a plural actor that grows while placing life on center stage, Llanisca Lugo, from Cuba, shared the challenges and lessons we have learned throughout the processes of regional and international alliances, in building solidarity-driven, grassroots internationalism. One of these aspects is how important it is to overcome sectarianism between and hierarchization of struggles, through processes of listening and convergence, building trust among common struggles that promote the integration of the peoples.

Tica Moreno, from Brazil, reflected on how communication is a fundamental collective process of movement-building, counter-hegemony, and technological sovereignty. As part of the movement’s political vision, promoting grassroots feminist communication requires facing naturalized datafication, democratizing the word, and recording our memory in movement, using free technologies in doing so.

During the plenary session, we learned from feminist movement-building in Turkey, as they face misogynistic and authoritarian attacks. In Haiti, peasant women carry on organizing and fighting against femicide. In the Democratic Republic of the Congo, feminism is organizing to expand women’s political participation with parity. In the United States, the alliance and solidarity of anti-racist and feminist struggles with the grassroots movement has made historic progress, such as having a non-binary transgender leader in a workers’ movement. Also in the US, peasant organizing is facing language injustice and expanding the autonomy of actors in the political movement-building process.

We also listened to the organizational bids and processes of grassroots feminism in Chile, Quebec, and Guatemala. The diversity of experiences, political contexts, and organization strategies set the tone for the challenges and showed the richness of the pathway we are building as grassroots feminism, in each of our places and in our bid for international organizing. Making feminist economy a pillar of the emancipatory project we build allows us to assemble this diversity, building the necessary strength to confront the capitalist, colonialist, racist, heteropatriarchal system, as summed up by Nalu Faria, of the International Committee of the World March of Women.

The School is the result of the joint effort of four organizatons—the Indigenous Environmental Network (IEN), the World March of Women, the Grassroots Global Justice Alliance, and the Grassroots International—which shared learning processes with the School and political commitments from this point forward.

Sandra Moran, the coordinator of the Feminist School, conducted the closing session of this first edition, calling everyone to continue to strengthen and expand our movements. There are many plans for each territory and for the continuation of the School. A School of Facilitators, an on-site International Feminist Organizing School, Schools in different countries and regions, as well as collective efforts to translate materials, feed back, and continuously build grassroots feminist internationalism.

Our political education serves the purpose of promoting more organizing and more mobilization. We educate ourselves in movement to change the world.

Words by Tica Moreno
Translated from Portuguese by Aline Scátola