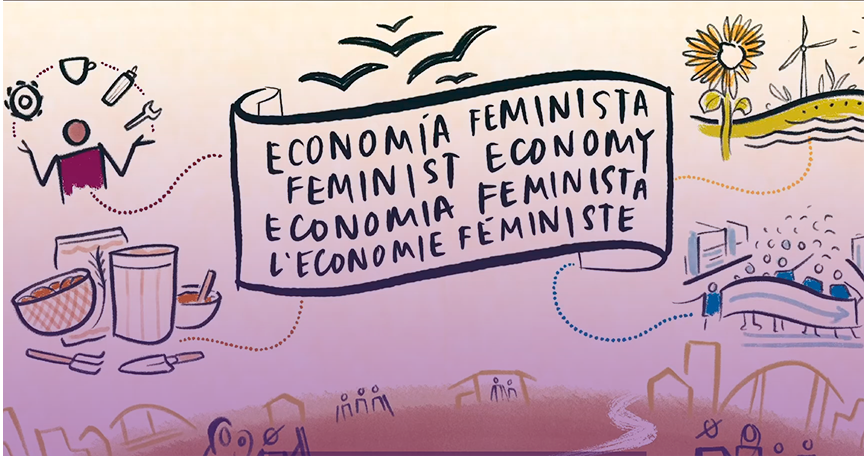 #FeministSchool: The Critiques and Proposals of Feminist Economy

Feminist economy on the agenda to promote political education and strategy for change.

Feminist economy is a proposal and a strategy pushed by grassroots feminism. On June 7th and 8th, it was the topic discussed at the Berta Cáceres International Feminist Organizing School.

They include the commodification of life, pollution, and privatization. We face the exploitation of human beings and nature. They are processes that are modernized today, but their roots are in colonization and colonialism: the hoarding of territories, the subjection of Black and Indigenous peoples, the continuing imposition of gender binarism, and the separation between human beings and nature.

We face work alienation as well as alienation in our relationship with food, nature, and our bodies. We face a battle of times: between the accelerated, productivity-oriented time of capital and the time of life, which is marked by regeneration and care. Different forms of violence, the control over bodies-territories, militarization, and incarceration are tools used to subject life to capital.

We face the invisibilization of domestic and care work, which is not acknowledged as part of the economy. In this process, the subjection of bodies and the control over sexualities are the fuel for the sexual and racialized division of labor. The overburden endured by women and the mental load of being held responsible for care are also invisibilized. We are faced with this responsibility that is naturalized and we challenge the imposition of the heteropatriarchal family.

Just like oppressions are intertwined, our proposal for change also needs to be systemic: it cannot be fragmented, but it must look at a big, complex, plural picture based on different territories, from a local, national, and international perspective.

Racist and heteropatriarchal capitalism grabs our imagination and the possibility of thinking outside its own paradigm. Ancestral wisdom, languages, and worldviews have been defended over the course of the School’s activities, as a strategy toward resistance. Feminist economy is a tool that helps us understand the world and change it, putting life on center stage, breaking the shackles of dominant thought and hegemonic policies.

Critiques and Contributions of Feminist Economy

Nalu Faria, of SOF– Sempreviva Feminist Organization and the International Committee of the World March of Women, introduced the history and accumulated formulations of feminist economy. She underscored that feminist economy, as we understand it in grassroots feminism, is a tool for the critique in our struggle against neoliberalism, free trade agreements, and transnational corporations.

Feminist economy offers criticism against androcentrism in the ruling economy that deems the white man as the universal being. It also challenges the limitation of the economy to what a money equivalent receives and circulates in the market. This makes the dominant economic thought reduce work to employment, hiding the fact that wage labor is dependent on domestic and care work. The power dynamics and relations of sexual, racial, and international division of labor are also invisibilized.

The starting points of feminist economy are the everyday processes that sustain life. With it, we acknowledge and incorporate women’s economic experience and expand the frontiers of the economy to all processes, relations, and types of work that are necessary for the sustainability of life. The focus, therefore, is not on the workings of the market and corporate profits. Its elucidations and concerns are not reduced to numbers. The focus is on the sustainability of life and on what has to change in society so that life is no longer sustained at the expense of the unpaid or underpaid work carried out by Black and immigrant women or the exploitation of nature.

Feminist economy criticizes the dichotomies and binarisms that separate and create hierarchies between production and reproduction, nature and culture, reason and emotion, emphasizing the inter-relations between human beings and vital processes as integral parts to each other. Interdependence and ecodependence are key principles to elaborate this view.

The video below introduces the elaboration of the World March of Women Americas on what it means to put the sustainability of life on the political center stage.

As we have seen, feminist economy is not just another “topic.” It articulates our project for change and contributes to build syntheses for our political program without fragmenting agendas. Putting the sustainability of life on center stage is a political proposition offered by feminist economy, which is connected with food sovereignty, the integration of the peoples, solidarity economy, and environmental justice. By holding a diverse discussion panel, we learned about experiences that incorporate or share common ideas with the propositions of feminist economy.

From Cuba, we met the pathways toward measuring and giving exposure to care and women’s economic contribution for the sustainability of life. This measurement is a starting point to pinpoint inequalities and propose political strategies to tackle them. Teresa Lara, a member of the National Network of Care Studies in Cuba, reflected on the political challenges posed to build systems of support and socialization of care. She highlighted that a country has many different realities, and this should be taken into account.

From the experience of collective work in Morocco, we learned about the story and the forms of organization of worker cooperatives. Khadija RyadI, of the World March of Women, talked about how the democratic organization of labor contributes for the distribution of the fruits of labor and women’s autonomy. Meanwhile, she pointed out the challenges that cooperatives that have women as members face in trade, in the acknowledgment of their rights and social protection, and in the relationship with the structures and dynamics of the economy, when dealing with middlemen and the inequalities that recreate hierarchies and dynamics of power even among and within cooperatives.

Yıldız Temürtürkan, of the WMW Turkey, shared the experience of the women from Fındıklı, who resist the threats of megaprojects in their lands. She pointed out how the sustainability of life in this context relies more on subsistence production than on the wages of paid work.

Yıldız pointed out two political challenges of feminist economy based on this experience. The first is the need to conceive time as something that is not linear, understanding the complex relationships between present, past, and future in the processes that sustain life. Learning the practices and history of the peoples is a feminist task in the battle for the present and the future. The second challenge is changing the understanding of labor, challenging its organization, its divisions, and its meaning. This change is related to the concept of time of work and time of leisure, which must change as we reorganize the kinds of work that sustain life.

Reconsidering time and labor in relationship with nature is an understanding that has been accumulated from food sovereignty, one of the most powerful political proposals that interconnect with feminist economy. Wendy Cruz spoke about how La Via Campesina has built food sovereignty based on six pillars: prioritizing food for the peoples; appreciating those who produce food; reducing distances in food systems (challenging agribusiness and the trade agreement structures); local control over local territories, seeds, and water; developing different kinds of knowledge and skill (and strategies such as the Latin American Institutes of Agroecology, which further the integration of the peoples); the work and care with nature (and advocating for peasant agriculture, which cools the planet and counters the false solutions presented by the market for the climate crisis). Peasant women play a primary role in building food sovereignty, protecting seeds, and defending territories and ways of living. Wendy underscored that they have been building food sovereignty for 25 years as a proposal that only makes sense when it is connected with a political actor that becomes increasingly empowered: peasant men and women who are organized locally and internationally.

The participants stressed their understanding that capitalism cannot support itself without women’s work, and that there are many and complementary battle grounds. They underscored the strategy of politicizing collective care, strengthening feminist work in grassroots organizations, and furthering political education in the battle for consciousness and the battle of ideas.

Feminist economy gives exposure to processes, relationships, and the kinds of work that sustain social reproduction, proposing a reorganization both in reproduction and production. This means challenging not only how things are produced, but also what is produced.

These reflections contribute for a better understanding of how powerful feminist economy is as a form of organizing a project for change that is grounded in grassroots feminism. Theory, practice, and movement building must be deeply connected on this path. For the next School session, on June 21st, participants will further discuss a shared vision of feminist economy as a proposal and strategy of grassroots feminism.

Words by Tica Moreno
Translated from Portuguese by Aline Scátola