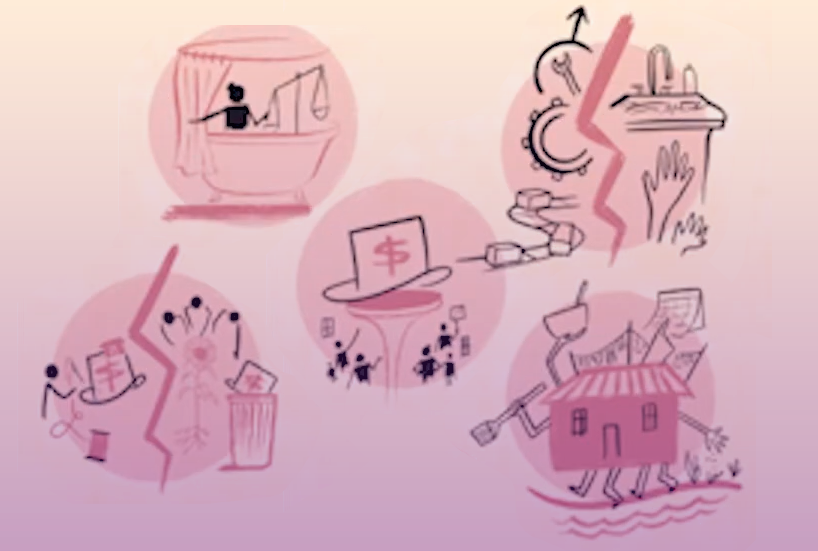 #FeministSchool: Feminist Economy Is a Proposal and Strategy for Movement Building

Feminist economy and movement building were the focus of the Berta Cáceres International Feminist Organizing School on June 21st and 22nd.

Feminist economy is a proposal and a strategy for international grassroots feminism movement building. The principles and key concepts of feminist economy were discussed in the previous two sessions at the Berta Cáceres International Feminist Organizing School. The synthesis of this accumulated elaborations was introduced on the video below on June 21st, to inspire participants to continue the conversation.

The working groups were called to create a collective drawing about the organization of territories for the sustainability of life. Drawing something together is a common activity often adopted by methodologies of grassroots feminist education to express syntheses and exercise other forms of expression. Doing this online was a challenge that the groups took on with creativity and imagination. “Do we want to draw a web or a spiral to represent the processes that sustain life?” They soon agreed that it could be a spiraling web.

The drawings and presentations of the groups point out that, when we organize our territories with life at the center, our political imagination expands, as well as our emancipatory horizons.

“Putting life on center stage” is not an abstract thing to do. It’s the lives that are rooted in territories and communities. It’s human beings and nature. Participants underscored the diversities of economic forms and ways of living that we want to sustain. Different forms of knowledge, worldviews, and ancestral origins are acknowledged and passed on from generation to generation, as part of community organizing, education, and a collective thinking that is continuously moving.

A territory for the sustainability of life redistributes care, acknowledges interdependence with respect and freedom, making it a collective effort, supported by public funds and carried out in shared spaces. The principle of ecodependence, nature and its elements—fire, air, earth, and water—are included in the drawings. They feature borderless territories and spaces, where rural and urban areas are closer and connected to each other. In them, self-management produces food, clothes, and materials; markets are built based on reciprocity, solidarity, and complementariness, and work is not alienated.

They are territories where politics is done differently, based on people power, feminist awareness, direct democracy, and assemblies to decide what’s important to sustain life. Other forms of restorative justice and accountability are created and put into practice. Our gender nonconforming bodies and sexualities are visible. The groups placed respect, equality, love, and desire at the center, as principles and practices for a dignified life free of violence. The time for leisure, conviviality, music and play, for the bonfire and festivities, all that are part of territories that are organized for the sustainability of life.

This exercise toward a synthesis drew attention to our starting points: our everyday lives and our knowledge. As women and nonbinary people in movement, we know that putting together this emancipatory horizon organizes us for the struggle in the palpable conditions we experience, with all the challenges it entails. Reclaiming body-earth territories, collective property, regeneration of vital spaces that have been polluted, hoarded, or desertified, dismantling corporate power, and reclaiming peace are conditions that can make this change possible.

We talked about transition and revolution. About the need to build collective, plural, and empowered subjects, to wage this battle, breaking free from the shackles and knots of capital power. We situated this articulation in building counter-hegemony, and we acknowledged that there are many different pathways and contexts toward it. There are no fixed formulas in feminist economy, but rather principles to be put in motion by collective subjects.

We understand the big challenges posed to build the changes we aim to make, and we acknowledge how powerful this system of domination is. But when we look at what we have built in terms of proposals, experiences and organization, values and ideas, we definitely find the strength that only the collective struggle can give us.

Our local struggles, resistance in our territories, and concrete experiences are interconnected with our big mobilizations, the struggles against transnational corporations, against free trade, against the war. What connects different struggles is the sense of what we want: to dismantle this system and its logic of accumulation and domination, and to put the sustainability of life at the center of the organization of society, with solidarity and reciprocity. There should not be a contradiction between our vision for the rupture toward a different model (society) and proposals for a transition. Our concrete experiences that are built based on the sustainability of life give us the elements and principles to guide our proposals for a transition. They strengthen our work to demercantilize life and build the commons. This requires other forms of organizing ourselves in our communities, but also in states and regions, in connection with people power and the pursuit of emancipation. This is why, when we look at our collective drawings, we see the web that sustains life being woven as a spiraling web, because we think about horizontality, not hierarchies. Building this allows us to conceive other horizons of freedom and pleasure.

“We have a proposal, we need movement”

On June 22nd, the School started its final stretch of political education activities, focused on movement building. This discussion started by looking back at the elements and challenges that have been discussed in the past three months as we came together for this international feminist education effort. Our sisters from Cuba Marilys Zaya and Yohanka León del Río introduced a synthesis of this elaborations we have accumulated over time.

They pointed out that the task to build a grassroots feminist movement is posed with internal challenges regarding the dynamics and workings of our movements. Our diversity and pluralism are a fortress, and they become stronger as we face relations of inequality, hierarchies, invisibilities, and violence in political processes. From our organizations, we present to society visions and battles to promote a systemic change that puts life on center stage.

Our movements focus on building struggles in alliance, in which solidarity is a principle and practice. Political education, from a grassroots feminist education perspective, articulates intergenerational challenges and becomes more powerful with alliances between trans, cis, and gender noncomforming people and movements. We become stronger as our education carries an emancipatory sense, revitalizes Indigenous languages and worldviews. Grassroots feminist communication is strategic for the connections between our organization and the battle between projects for society. The forms of communicating face the challenge of putting critique into practice and building technological sovereignty.

One of the facilitiators of this session, Carmen Diaz, of the World March of Women Mexico, underscored all the militant work that is necessary to build grassroots feminism, pointing out the lessons that were learned at the School. We learned to build syntheses by recording and listening to the working groups, we were dedicated to facilitating the building of common knowledge, we learned about technology tools that most of us were not familiar with, and we understood how language justice is strategic for global movement building. All this collective work and energy sustains our movements.

Carmen highlighted that our history and memory allow us to resist and care for ourselves collective. The meaning of what we are building is connected: it strengthens our movements to strengthen our alternatives. When we build our alternatives, we also strengthen our movements. We build grassroots organizing from our knowledge and everyday lives, and this is fundamental to break free from the systems of oppression.

Back to the groups, we were tasked to identify the challenges and proposals for movement building from the territories, with a global perspective. The conversation was around the pandemic and post-pandemic contexts; the rise of the far right and religious groups to power; the fragmentation of social movements; the development of a strategic perspective in face of the co-optation by states, by the agendas of the United Nations, and international coperation; the criminalization and violence that weakens the defense and reclaiming of body-earth territories; the replication of oppressions within movements.

Another facilitator of this session, Sandra Moran, of the WMW Guatemala and a School coordinator with the GGJ, discussed elements for the syntheses of the conversation. She pointed out how important it is to have a political culture that acknowledges us in our diversities, as well as in different contexts where we are in movement, which are where our perspectives and proposals are situated.

This situated diversity enrichens and strenghtens us as international movements, and poses us the challenge of building bridges and syntheses that are capable of overcoming differences and moving forward in common and shared struggles. We also have to tackle hierarchies within movements, as a political culture of “unlearning what divides us,” acknowledging different contributions and tasks, perspectives, and generations that build our movements.

Another challenge is about developing our spiritualities, acknowledging that different cosmogonies, worldviews, and spiritualities are forces to move forward, as part of our efforts to face the religious fundamentalism that affects us around the world as well.

We talked about creating political education processes, especially about how central this is when it happens in street mobilizations and in building tactics and strategies for our movements. It’s about building grassroots feminist power, capable of expanding democracy in different countries, territories, and our movements too.

The strength of grassroots feminism comes from this daily contribution from so many and all women and nonbinary people who have dedicated their lives to change.