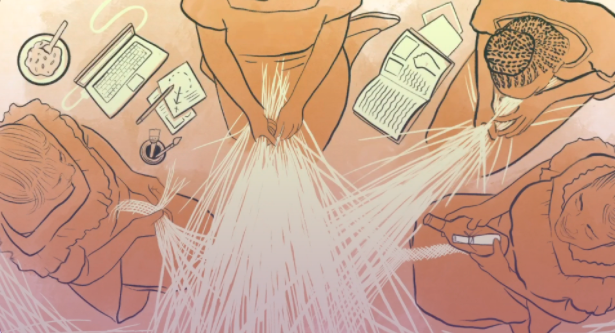 #FeministSchool: To Understand and Tackle Systems of Oppression

Colonialist, heteropatriarchal, and racist capitalism: overlaps that exploit and subjugate the peoples

By Capire, with contributions by Gina Alfonso

The meeting of the International Feminist Organizing School on April 12th and 13th was dedicated to a discussion about systems of oppresion. The day started with the powerful words of Berta Cáceres, recorded in 2007. May we “concretely dismantle capitalism, patriarchy, discrimination, racism,” Berta calls us, and this is the meaning of the political movement-building that we conduct at this School.

Capitalism expropriates everything that may generate profit, and it does so through transnational corporations in the fashion, food, and pharmaceutical industries. It does so by appropriating and exploiting women’s labor, lives, bodies, and subjectivities, imposing binary forms of being that are functional for accumulation.

There are different forms of oppression, and they overlap. Debt rips through all of us. Some of us live in highly industrialized countries, while others live in very poor countries. This affects us and forces us to move, to continuously migrate, and it forces us to manage time and space in different ways.

When we wear our clothes, we often don’t know the process through which those clothes were produced. There is no consciousness about how precarious and exploited it is, about the situations that many women endure in jobs producing for transnational corporations supported by governments, under the silence of job creation in poor countries, at the expense of the health and life of working women. These are alienating, repetitive, enslaving jobs at maquilas (sweatshops), in domestic work, in polluting agricultural operations. Outsourcing falls on migrant, poor, Indigenous, and Black women. As precarious workers, they pay the costs that companies won’t hold themselves accountable for. Women are sold as sex and work slaves. We see a complete lack of ethics in these situations, which are allowed and organized by the hands of the “free market.”

Consumerism and individualism erode the awareness that could put a stop to these powers that commodify. The system also leads us to compete with other women in different spaces, which divides us. The complex thing about the systems of oppression is being able to pinpoint them in everyday life and see how they make their way into our lives and become invisible. This is why antisystemic struggles are related to personal life. In our countries, there is so much alienation, and the system steals ideas. They despoil the concepts, slogans, and symbols of our struggles. Capitalism also expropriates our alternatives. This is why we must share our ideas with each other, to strengthen ourselves.

States are subjected to the interests of transnational corporations. Governments lose their legitimacy and become associated with drug trafficking and the arms race. States justify forced displacement, and the community leaders that oppose their attempts to force people out are criminalized. Mass migration is encouraged through an unstable economic, social, and political situation, in which people don’t leave their home country because they want to, but because they have no choice. There are no jobs, no dignified living conditions, there is a struggle for land, for the right to self-determination, to self-government, and to the participation in political, economic, and social decision making.

Exploitation of common goods and nature by transnational corporations is most brutal in Indigenous territories. The exploitation of Mother Earth leads to banishment. As part of their culture, Indigenous women produce their own clothes, which is part of their identity and an important action that also allows them to preserve nature.

Transnational corporations are institutions of domination. They appropriate everything that is ours and use us, then treat us as if we were disposable. We want to live without being colonized. There is a renewed North-South division based on technology platforms and digital systems. These are renewed forms of exploitation and colonization. The patriarchal logic is also accentuated this way, disrespecting the timing of care, imposing the linear and fast-paced timing of productivity. The frontiers of capital expand, but so does resistance, such as free and creative technology. By learning how to critically and effectively use different technologies, facing contradictions, and creating alternatives that are useful for us to organize, such as the example of this School.

The system limits tastes, colors, and our bodies. Our body is the primary territory to defend. The systems of oppression affect our self-esteem, and we must push our strength and spirituality forward. We are warrior women who fight, in our ancestral struggles in our territories, but the system imposes ethnic and racial classifications upon us.

Watch below a video where Gina Alfonso, one of the mediators of this session, presents a view on systems of oppression that was accumulated through the building of the School. The video is narrated in Spanish, with subtitles available in Portuguese, English, and French.

Later on, as part of the building of a shared political view, the conversation that took place in the groups and the plenary session, via chat messages or through the voices of each participant, expressed how this School is an intense and unique space of reflection and exchange. Experiences as diverse as different historical processes and the struggle from each place found surprisingly similar and common ground, even when they are oceans, continents, and walls apart. Many perspectives were shared about the place of different religious beliefs in women’s oppression, as well as different historical understandings of patriarchy and its overlap with colonial capitalism.

During a shared panel, participants presented views and analyses on white supremacy, colonialism, and racism in four different contexts.

With the diversity of peoples that live today in the 54 countries in Africa, their histories of struggle for liberation against colonialism, we learned that, in many countries, the foundations for asymmetry of free trade and debt that marks the current neoliberal period have been laid during independence agreements. They were later legitimized by multilateral organizations and reinforced by international financial institutions. Militarization and extractivism are in full swing, overpowering territories and using violence against women as an instrument of domination and control. The last colony of Africa, Western Sahara is a territory struggling for independence and self-determination.

With the experience of women of the Iximuleu Indigenous peoples, we learned that there is a continuum of resistance, expressed in the dynamics of the continuous struggle for the lives of people and nature, including all their expressions and relationships with each other. Colonialism attacks the peoples, their memory, and history. The colonization of ancestral knowledge and the banning of mother tongues, even today and in different parts of the world, are instruments of domination. Knowledge, languages, cultures, and identities are displaced.

The anticolonial struggle carries the potential to challenge all structures of domination, bringing bodies to the center of the struggle. We learned about the colonial roots of transphobia in the United States. The social construction of gender is profoundly violent, especially for Black people, nonbinary people, and sexual diversities and LGBT people. This binary construction of gender also plays a functional role in the accumulation of capital. Understanding how these things overlap and tackling them as collective actors is part of the challenge of this School.

We continue to face the effects of colonialism around the world and the present colonial occupation of Israel over Palestine. Zionism is historically supported by a view that erases and denies the existance of the Palestinian people in their territory that is now occupied. This is not a religious conflict, but a process of colonization, plundering, and banishment, grounded in religious fundamentalisms. At least 66% of the Palestinian population have been forced out of their homes and land.

The self-determination of the peoples over their territories and fates is deeply connected to the autonomy and self-determination over our own bodies, sexualities, and identities. And we articulate all of these struggles in movement and solidarity, through internationalist feminism that tackles the systems of oppression and organizes our alternatives for society.

We live in struggle, we must unite and follow each other’s path in solidarity. The School will contribute to make us stronger in alliance.