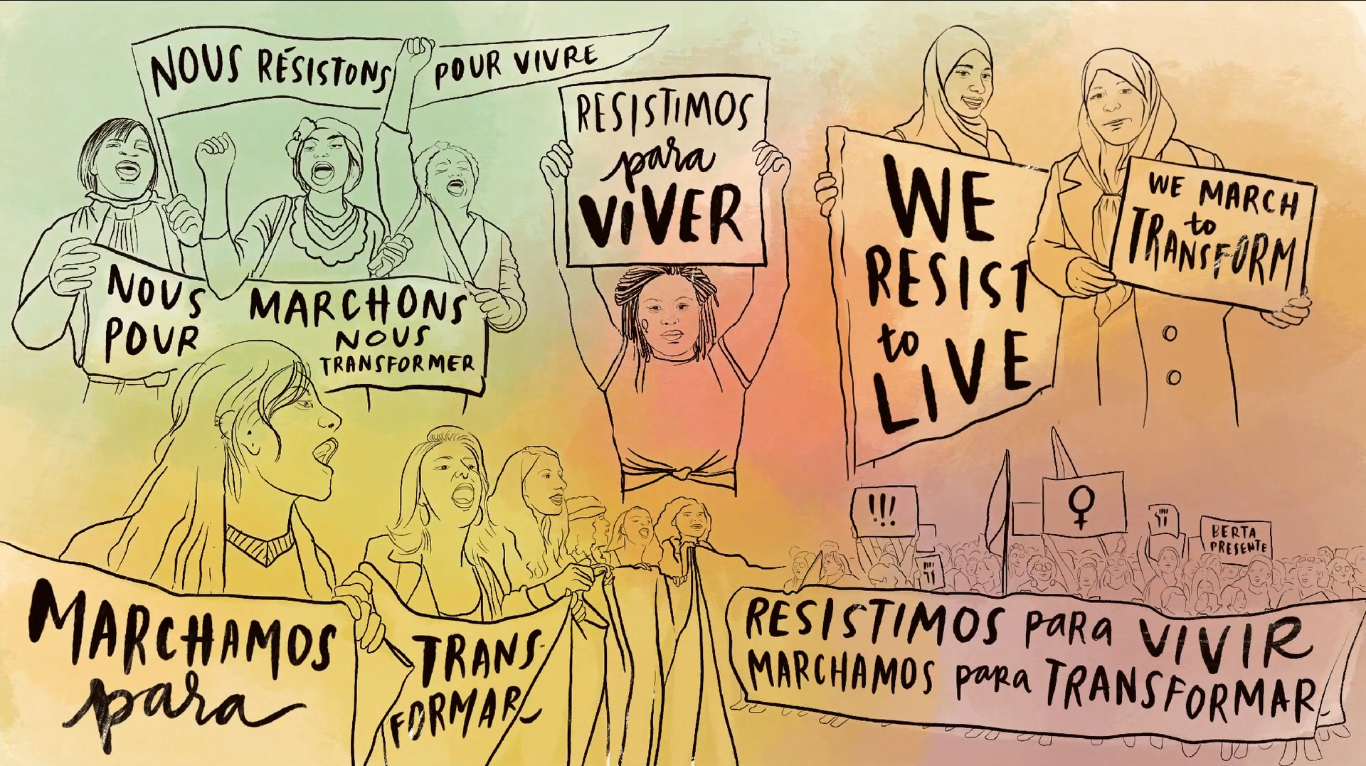 Online event paid tribute to women’s struggles in their territories and illustrated the importance of education for grassroots feminist international organizing.

The International Feminist Organizing School (IFOS) was launched on March 4th at an event attended by around 200 women from different parts of the world.

It was an exciting meeting that showed how strong this movement-building process is. In addition to introducing the School, its political objectives, curriculum, and participants, the event also looked back at the history and legacy of Berta Cáceres, on the date that marked her birthday. Videos of Berta and words by her daughter, Bertita Zuñiga, and sisters in the struggle composed an overview of her legacy, grounded in practices, boldness, grassroots communications and education, spirituality, and the joy of peoples in movement.

Bertita, who is now a coordinator of the Council of Popular and Indigenous Organizations of Honduras (COPINH), pointed out that Berta taught that thought emerges from grassroots struggle and organizing, and that struggles are comprehensive: defending rivers and territories is integrated with internal and external threats, and this is why resisting is also struggling against racism, colonialism, and patriarchy. As the peoples wage concrete struggles to defend their territories, the whole system, banks, and power are challenged.

Berta would always point out the importance of worldviews of peoples who are resisting. She used to say that “the moment our identity and worldview disappears, we too disappear as the Lenca people, and this would be the victory of coloniality that aims to destroy our resistance,” Bertita recalled.

The struggle is permanent and it is everywhere. Berta believed in mobilizing out on the streets and in recognizing diversities while also making sure not to break up the struggles. “If something represents Berta Cáceres, that was her work organizing different struggles and different views,” finding ways to overcome differences to tackle the common enemy.

She believed in grassroots justice in face of State impunity, and this was built on the foundation of the struggles in defense of territories. Also, Bertita underscored the teaching that the struggle must be waged with hope and enthusiasm, even amid so many trials and tribulations, and even though sometimes we may feel small. Eventually we will reap the fruits of this struggle and our victories.

From Cuba, Yohanka León del Río, of the “Latin America: Social Philosophy and Axiology” Research Group (Galfisa), shared how impactful it was for Cubans to meet Berta, “that woman of rivers, defiances, and revolutions.” She pointed out that “Berta’s political legacy is personal, because, for women, the personal is political. It is a testament to life, to permanent  struggle.” Across spaces and hemispheric meetings in which Berta participated, she advocated for the need to organize struggles in communities as a continental, international movement, with strategic thinking. A thought process that includes building people’s power and whose strength is supported by the diversity of the peoples who are struggling: Indigenous communities, peasants, feminists. She defended and put her body, her spirit, and her strength in the “simplicity of tenderness,” the simplicity of the reproduction of everyday life, the pressing need for tenderness to face the terror of capitalism.

With Berta Cáceres’ strength and legacy, the School is launched as a movement-building process, to share views and practices, to elaborate and reach political syntheses about our resistances, to strengthen grassroots feminism organizing by articulating it with the building of a project toward change based on feminist economy, as depicted on the video below:

The School was initially planned to hold on-site activities in Kenya, but it was redesigned and will now be completely online. In April through July, it will hold meetings every two weeks to discuss the pillars of the School curriculum, which have been elaborated over the past two years. The School itself is a process that moves forward in grassroots feminism organizing. It was built by four movements and organizations — Grassroots Global Justice, Grassroots International, Indigenous Environmental Network, and the World March of Women — and represents a process of political syntheses articulated with grassroots education methodologies, aiming to contribute to educate militants who are also educators and organizers of grassroots feminism in their countries and territories.

Capire will be a mirror of the School and will publish an article with the synthesis of contents and practices after each meeting.