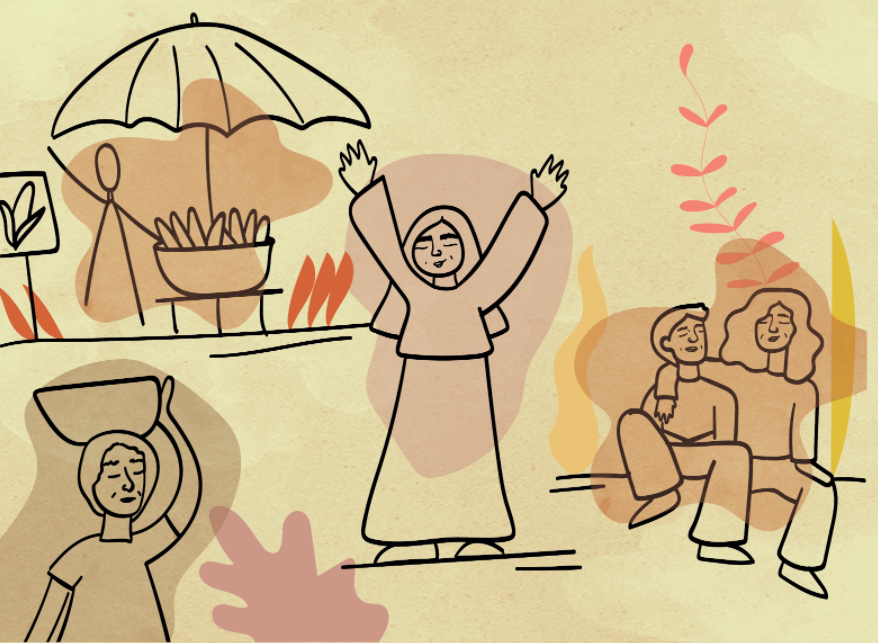 #FeministSchool: State and Democracy Are Battlegrounds of Feminist Struggle

Read about the session on state and democracy, with experiences shared by women from different parts of the world, such as Kenya, Venezuela, Kurdistan, and Bolivia.

We are survivals of genocidal states. We are Palestine. We are Colombia. The mística (grounding spirituality) activity in the beginning of the session on State and Democracy at the Berta Cáceres International Feminist Organizing School featured the strength of the peoples who struggle for self-determination and sovereignty and affirmed international solidarity as a continuing practice of grassroots feminism.

The words of Berta Cáceres demonstrated how important it is to acknowledge the legitimacy of the peoples in their struggles, which often challenge the legality of the state. This shows the character of state domination, the legality of which enables coups and opens the way for transnational capital to advance against the peoples’ territories.

The experience of the Honduran people, depicted on the video below, exemplifies that, for grassroots feminism, the debate around the state and democracy is the political conversation about the strategies of social movements in each different situation.

State and democracy are battlegrounds. The first day of activities was dedicated to understanding the development of the modern state under capitalism, exported from colonization; the role of the state in our lives (through regulation, public policy-making, and/or coercion); and also the political perspectives and strategies of the peoples who are struggling in these battlegrounds.

The sisters of the MST (Landless Workers’ Movement), from Brazil, introduced strategies to challenge the dynamics of agribusiness, intertwined with state policies, as well as their struggles to promote structural change toward grassroots agrarian reform.

Experiences were shared by women who self-organized the Umoja autonomous community, as a strategy to live a life free of violence in Kenya. The participants also learned about the struggle for self-determination waged by the Kurdish women and people.

In groups, we reflected on the political strategies against, within, or outside the state, as well as on the combination between these strategies in different contexts. We pinpointed the ways how these strategies are combined and the continuous need to build grassroots mobilization and organization to confront and challenge oppressive governments and states, as well as to resist setbacks and fight for public policies and legislation.

This battle is not limited to the state, and it permeates society. This is why the organization to change the correlation of forces is a continuing challenge. For feminism, a challenge is posed to maintain autonomy and grassroots mobilization in face of institutionalization and depoliticization related to international funding and agendas of the United Nations. In many contexts, the movements are directly challenging state policy-making that criminalizes the social struggle and colonialist states, such as Israel against Palestinian self-determination.

The political battle is waged beyond the borders of nation states. It is about challenging corporate power and free-trade agreements.

As pointed out by the facilitator, Cindy Wiesner, of the Grassroots Global Justice (GGJ), all these strategies bring about a key question about democracy. What democracy are we talking about in each context? What is the democracy we fight for? It was apparent that emancipatory aspirations don’t fit into the mold of this liberal representative democracy that is adjusted to the domination of the bourgeois state. Expanding participation, in the sense of expanding it toward a socialist democracy, is a strategy to building people power.

On the second day of political education session, the focus was on building alternatives. The creativity of grassroots feminism marked this meeting. Isabel “Chabe” Vinent became the host of “Berta TV” and interviewed the World March of Women militants Alejandra Laprea, from Venezuela, and Graciela Lopez, from Bolivia.

Graciela shared the elaboration of theory and practice in Buen Vivir (good living), nourished as part of how a grassroots challenge against neoliberalism, in which the Cochabamba Water War is exemplary. These struggles demanded political change beyond just electing a new president: they consolidated a new Constitution for the Bolivian state, in which Indigenous peoples are acknowleded in a plurinational state.

The political meaning of Buen Vivir comes from Sumak Kawsai, in Quechua, and Suma Qamaã, in Aymara. In these two languages, there is a perspective of good living, an admirable living, of caring for others and living together, a sense of fullness that is not found in the Spanish language. Graciela points out how important the constituent process was, drafted by the people and by women, the legitimacy and the many forms of knowledge of these people, which were beyond the Western legal framework. They incorporated community-based and Pachamama justice and set a new standard for feminist struggles.

“A revolutionary government is not the same as a revolutionary state.” A new constitution also marked the Venezuelan process, addressed in the interview granted by Alejandra Laprea to Berta TV. The militant looked back at the history of mobilizations that led to the election of Hugo Chávez. Its Boliviarian socialist characer is part of this course. A constitutional change established new political and territorial divisions, new forms of managing and organizing life.

The women in this process were made visible as political actors. At the same time, feminism witnessed a re-elaboration of the patriarchal common belief, which maternalizes women’s political action. This is part of the political battle.

There are no “how to” guidebooks on forging change in each territory from its own people’s history and organization. Mistakes and successes must be acknowledged as part of these processes, and grassroots democracy requires debate and learning about the mistakes that can help move forward. These are not simply battles around values or political will. The people must reclaim the control over natural goods and the economy to make it possible to expand and move forward in public policies.

Tree of Democracy and Change

Inspired by the power of these grassroots changes and aware of the imperialist offensive against revolutionary processes, the groups once again came together to build and propose alternatives to the state. The tool for this activity was a tree, which was divided into visible, invisible, or hidden parts, between political, economic, and sociocultural. The synthesis of this activity made it clear that these different aspects are inseperable when it comes to strategies and proposed alternatives, precisely because they are intertwined in the dynamics of racist and heteropatriarchal capitalism.

The proposed alternatives integrated the diversity of economic, feminist, Black, and solidarity-driven practices, with the acknowledment, politicization, and socialization of domestic and care work. They highlight collective and democratic forms of doing grassroots feminist politics, expanding the sense of what is political across all aspects of shared life. Proposed alternatives include regional and peoples’ integration, based on reciprocity and complementariness, thus opposing the logic of free trade and corporate power.

The decommodification of life is a fundamental strategy, as is the defense and building of universal, solidarity-driven public policies. Emancipatory change includes education, bringing back ancestral knowledge, and energizing Indigenous languages and cultures.

Diversity, care, joy, and rebelliousness change society and subjectivities in a common process. Autonomy over our own bodies and the self-determination of the peoples and their cultivation practices converge with agroecology as a strategy toward food sovereignty. Part of these challenges includes changing urban-rural and north-south relationships in the perspective of justice and equality.

These are some of the practices and proposed alternatives that the women and comrades who took part in the School shared based on their realities. They face contradictions and challenges, but they set the peoples in motion, building the conditions toward change, with grassroots organization, mobilization, and strength.

With this session of political education on the state and democracy, the School wraps up this first unit, which aimed to build a common understanding of reality, in which other topics were discussed including systems of oppresion, the defense of Mother Earth, and bodies and sexualities. Starting next meeting, the School will kick off its second unit, on feminist economy as an emancipatory project and grassroots feminist movement building. Capire will continue to cover these meetings.