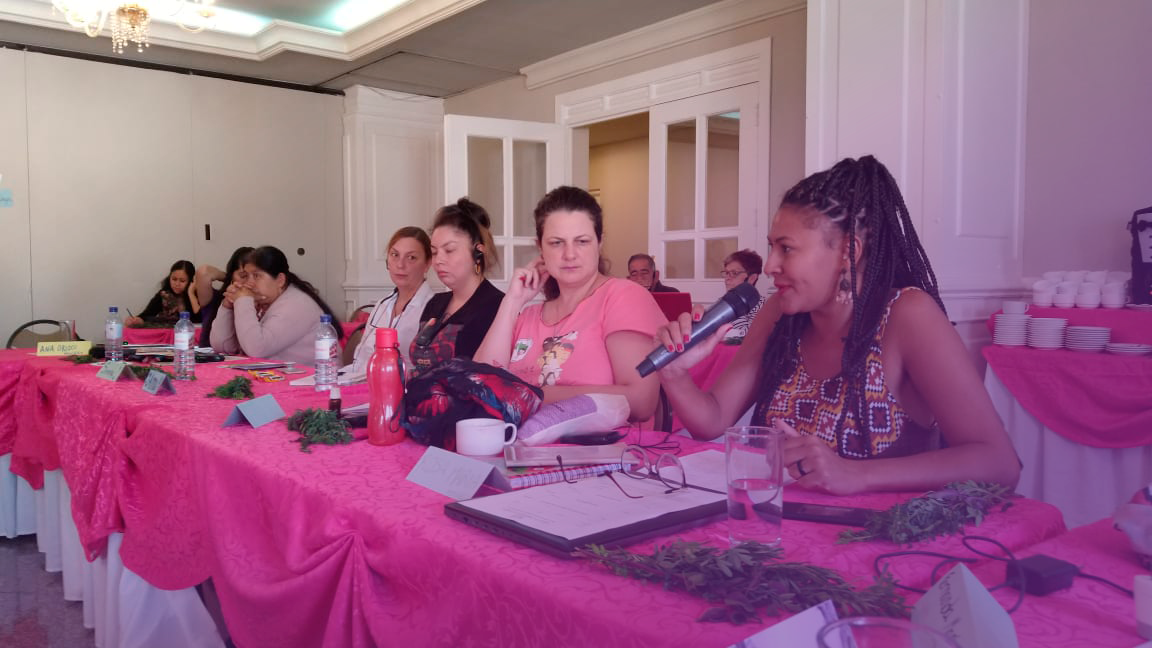 An International Feminist School Under Construction

Political education that brings together study and action strengthens feminism and grassroots movements. This is why, since 2018, representatives of Grassroots Global Justice, Grassroots International, the Indigenous Environmental Network, and the World March of Women are organizing a process to build the Berta Cáceres International School of Feminist Organization, a space for learning and developing syntheses among militants of social movements from different parts of the world.

“There is a lot of discussion at the School’s process about building a diverse, plural political subject who can look at realities as a whole. It also looks into the dimension of memory, into what our history of resistance means, into how we connect our way of organizing resistances today with our story of anti-colonial, anti-capitalist struggle. All this ultimately comes together as our vision, today, for building a movement and a struggle for change,” said Nalu Faria, from the International Committee of the World March of Women and one of the organizers of the School.

Sandra Morán, a coordinator of the School, says that, “from the theoretical framework of conceiving and building a political subject, we have decided that the School would not be simply a space to learn about these topics. It’s a space for learning and understanding, but also to foster feminist economy as a political proposal of the movement that we are strengthening. This has become our groundwork.” Eight working groups for the School subjects have been created, where women from the four organizations take part talking about the contents, sharing perspectives and views, and building methodological strategies to promote collective debate.

Feminist economy is the pillar structuring the School, organizing the strategies of resistance and enabling the formulation of alternatives in connection with the other subjects: Systems of Oppression, Body and Sexuality, Environment and Defense of Mother Earth, State and Democracy, Movement Building, Feminist Theories, and Facilitator Training.

Systems of oppression are considered the general framework at the School’s process to understand what transpires in people’s lives. When women talk about body and sexuality or nature and democracy, for example, they propose an understanding of the systems of oppression based on the actual reality of the participants. Feminist economy, feminist theories, movement building, and facilitator training are the answers to tackle those systems.

Sandra says that the School aims to support the building of “a shared understanding of reality, with a political proposal to develop feminist economy, the outcome of which is to build people’s power and alliances to take this proposal forward.”

Before February 2020, there were study and planning meetings, discussions about the proposed subjects, and two international seminars, as the School was initially conceived to hold on-site activities from time to time. But as the COVID-19 pandemic spread in 2020, coordinators and participants had to come up with strategies to create a pilot version for initial training activities online.

This pilot version of the School was held during the closing of the 5th International Action of the World March of Women, in October. For two days, there were activities where participants discussed systems of oppression and movement building in the current situation, which is marked by new conflicts and systemic change. There were 75 comrades taking part in this virtual meeting, from the four organizations as well as from ally movements, such as the Landless Workers’ Movement (MST), from Brazil, and the Civic Council of Popular and Indigenous Organizations of Honduras (COPINH).

The first challenge was to hold the activity at a time that made sense for women in different time zones, as well as to make sure everyone had access to the necessary technology and was given instructions to use it in order to make the School work. For this purpose, two-person teams were organized so that the women could support each other if they had internet connection problems and to be able to find solutions together to attend the School. The international seminars held before the pandemic were also used to support the definition of a methodology to be used this time.

One of the greatest challenges was to carry out the meeting among women who speak different languages. A permanent team of translators was set up to promote language justice. However, the working groups were conducted exclusively with comrades from countries where they speak the same language, and only one multilingual space was created. This is going to be a major concern to build new moments in the future, because it is important to make sure there is more interaction between different realities and languages.

Despite all challenges, Nalu said that the School pilot was well-received. “There is this feeling of concreteness. I think people liked the subjects selected for this school pilot. And it really helped to look at the current situation, connecting it with the debate about the system of oppression, which was really interesting. The contribution for this conversation was received as something that helps them to think about the reality of the movements in their regions.”

The graphic notes on the discussions and synthesis show how rich the conversation was, and how powerful a grassroots feminism built from these organizations and social movements is.

According to Sandra, the greatest experience gained through the School pilot was the many lessons they have learned. “I believe I learned, because we all did. We learned how to organize, we learned about translations, about the need to have more time, about how we have to prepare. It was fantastic for us, because we felt like we were together, even though we were in several different countries.” In this pilot, the women defined the name of this continuing process: Berta Cáceres International School of Feminist Organization, as a tribute to the Honduran feminist and environmental leader murdered in 2016.

The preparations for 2021 have already started, and the plan is to hold activities for three months, so that there is enough time for every discussion and activity. “Right now, we are organizing the centralized international school, while also speaking with the organizations about how the school can unfold in their territories, in their local realities,” Nalu explains.

“The organization of an international school will always be more than a course: it’s a process of organization and a process of conversation. And, in our case, the School is being organized by four organizations, which already makes it part of an alliance. This makes it even more apparent that we are pursuing education that can be a concrete process of movement building, of strengthening of alliances,” she adds.

At the Feminist School, participants are also the political subjects about which reflection and debate are formulated. It’s a tool that contributes to the alliance between the movements, to the construction of transformative syntheses between women of different realities, and to the spreading of ideas, practices, and the organization of grassroots feminisms around the world.