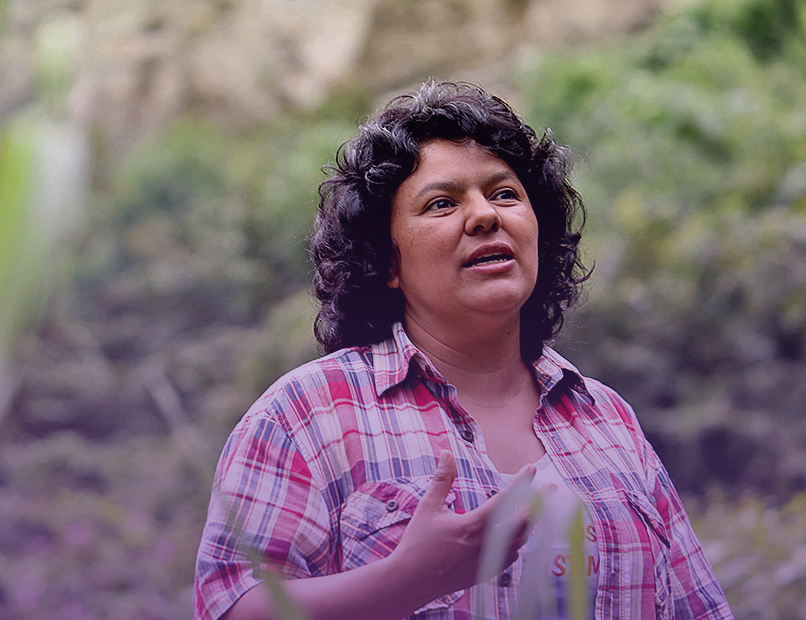 Berta Cáceres: “We Have the Challenge To Continue To Make This Rebelliousness Real”

Read and listen to a contribution by the eternal sister Berta Cáceres on the challenges of grassroots organizing in Honduras.

The following is a previously unpublished transcript of Berta Cáceres’ speech at the 7th International Workshop on Emancipatory Paradigms, held in Havana, Cuba, in 2007¹. Even though 14 years separate us from her speech, the challenges she presents to feminist, grassroots, Indigenous, Black, and peasant organizing are still relevant today. We publish her words and audio recording to bring back the voice and the teachings of sister Berta Cáceres, on the day that marks five years since her brutal political assassination. Berta didn’t die, she multiplied!

My name is Berta Cáceres Flores. I am a member of the Civic Council of Popular and Indigenous Organizations of Honduras [COPINH], I am from the Southwest region of Honduras, Lenca territory. A fraternal greeting from this people who carries the spirit of Iseleca and Lempira. We are very grateful for the invitation to share some things with you all.

Our organization gathers four hundred communities, most of them Lenca, as well as women’s, youth, and peasant organizations. These are communities that have been facing a hard reality for more than five hundred years, experiencing marginalization, dispossession, plundering, the imposition of structural adjustments, of privatization, by the huge presence and intervention of transnationals that promote the privatization of water, land, and forests. In face of that, the communities have to fight.

Today, with great strength, the struggle is against mining exploitation. Transnationals came, from Europe, from Canada, and the United States, threatening to end life, the territories, the water, and health. We are also facing the threat of big hydropower projects pushed by transnationals and financial organizations such as the Inter-American Development Bank [IDB], the World Bank, the European Union, USAID, and others. Honduras is part of the Puebla-Panamá Plan [PPP] agenda — which, like a sister has said, it’s not “Panama” anymore, but “Putumayo”. In Honduras, more than fifty hydropower dams are expected to be built. In my department alone, which is very small, they plan to privatize all the existing rivers to build dams, while having miners extract gold, silver, opals, and other metals and minerals.

We are also facing pressure from the United States government to promote monoculture to produce what they call biofuel, ethanol. Corn is up more than 100%, but now we won’t even have corn—corn will only be used to feed vehicles. Not only that, the tourism industry constantly attacks the Indigenous and Black regions and territories of Honduras. All that in the scope of the PPP: free-trade agreements [FTAs] signed in Central America—except for Costa Rica, which we hope will not pass it, with the referendum²—the FTA signed with the United States, and now another one coming with the European Union.

Another form of domination is patriarchy, with a triple weight on women: because they are women, because they are Indigenous, because they are poor. As we face this picture, our organization in our community did not just stand with arms crossed. We fight and define our own forms of struggle, made legal by ourselves. We express them in many different ways, knowing that organizing is imperative and extremely urgent to all of us.

So I also want to say that it’s not easy, because it also requires nerve from our organizations and our movement. We are still marked by notions of a very specific “x” ideology that does not understand the multiple colors and shapes, the diversity of our communities, our expressions, our struggle, our resistance. We don’t want this movement building to be just rhetorical or simply theoretical or lyrical. We want this movement building to become real by respecting our autonomies, our forms of struggle, our methods, those that each organization and movement define, understanding that there are stronger things uniting us.

As a grassroots organization, we stand before a challenge: the strategies of international financial organizations are creating a parallel between us, leading organizations—whether Indigenous or not—to engage in theme conversations. This makes our movements weaker, because they have a great power of co-optation. We can even see this in organizations that reach Indigenous leaderships, funded by the World Bank and the IDB. These are organizations that are negotiating our wealth and resources on behalf of communities. They have strategies to weaken the authentic efforts of our struggles.

True movement building happens in the concrete opportunity that struggle and resistance give us. We don’t see it any other way. The moment when we are struggling and resisting is the best opportunity for movement building. I also must say that we find it important to understand both the structural challenge and the vast struggle that means standing before this structural challenge that, in our communities, organizations, and movements, we still don’t fully understand.

We also have strengths, and one of them is the accumulation of historical, old, ancient resistance that continues to express itself in so many ways. We act historically as Indigenous peoples, as communities, regardless of the borders that have been drawn between us, in the historical solidarity of the Central-American people. This has been shown during the times of armed insurrection, and it’s now showing in the struggle in defense of water, forests, and land. We don’t see this as something that divides us, but as something that unites us, with strategic lines of struggle in our region.

We can also talk about something that is still holding us back, which is this reality we live in, the weight of the very dynamics of our organizations, and, most of all, repression. Most of our people can’t read or write, or struggle to do so; there is poverty, the need to survive. This is an inner reflection, while it also has to do with that outer situation which we suffer and cannot ignore. It also holds us back having to face situations of comrades who are imprisoned, tortured, and killed, which imposes a triple-effort dynamic on us.

Meanwhile, there is the pressure that transnationals and financial organizations exert on our territories, with their lying, hypocrite projects, and while they talk about guidelines for Indigenous people and whatnot, they are the ones providing the funds to give loans to plunder our wealth, our culture, and our knowledge.

Another challenge that we have is to keep our positions effective, being coherent with the struggles and demands of the communities, coherent with the historical force that our people shows, with their abilities and talents. We have the challenge to continue to make this rebelliousness real.

We of COPINH hold acts of resistance that sometimes are frowned upon, but in the end, we don’t care if they find them good or bad. They are expressions of struggle; for example, taking over and forcing out exploitative industries. We have more than thirty plants exploiting the forests in our area. We have been able to stop more than ten hydropower plants that lead not only to the privatization of water, but also of energy. We tore down the initial infrastructure of these megaprojects, because we say, we will not just sit around and complain. It is now, in this moment, that we have the opportunity to face them. We have conducted actions where the people seized wood and seized transgenic seeds, which we set on fire outside the National Congress. We have occupied embassies, the National Congress, and the Presidential Palace. These are forms of movement building for not only us, as COPINH, but also other Indigenous and Black peoples from Honduras, other fellow organizations.

We believe that another major challenge is building strength to promote these struggles. We still don’t have that, in terms of not only practice and doing it, but also between ourselves, providing the theoretical basis that we already have, but which we still need to further understand. Finding ourselves again. Creating. Birthing new things. Remembering where we come from. Remembering and bearing the centuries-old struggle in mind. Including this reason behind our movements, our resistances, with all their identity, their worldview, their strength, their conversation, their analyses and propositions, their coincidences and differences as well, because we have to acknowledge that we are not identical.

We must solidly realize—or, as comrade Suárez would say, “like a rock”—the education of our peoples as social and political subjects, building with those of us who are on the streets, in occupations, so that, in addition to practices, we are able to clearly, and more validly systematize our theoretical, political, and cultural bases in connection to this being that we are and this doing. And this should go beyond reflections, beyond theory, beyond statements. Let us effectively dismantle capitalism, patriarchy, discrimination, racism. From a community-based movement, we have taken a leap to national and international building, which wasn’t easy. Yet, we are committed with the willingness to continue to build, recreate, strengthen, birth. Thank you, good afternoon, comrades.

Berta Cáceres was a great feminist and environmentalist leader, a defender of the Lenca people, and a member of the Civic Council of Popular and Indigenous Organizations of Honduras (COPINH). Berta was killed on March 2nd, 2016 for challenging the powers that be in her country and campaigning to stop a hydropower project in Lenca territory. Her killers were convicted, but the courts have not yet decided to try those who ordered this political crime.

¹ Audio recording granted by Galfisa — “Latin America: Social Philosophy and Axiology” Research Group, from Cuba. Berta had deep bonds with the Cuban people and this was one of the many times she took part in editions of the Emancipatory Paradigms workshop.

²In October 2007, Costa Rica held a referendum on whether the country should sign a Free-Trade Agreement with Central America, the Dominican Republic, and the United States. Social movements conducted a great campaign against the FTA, but the proposal passed with 51.6% of votes.