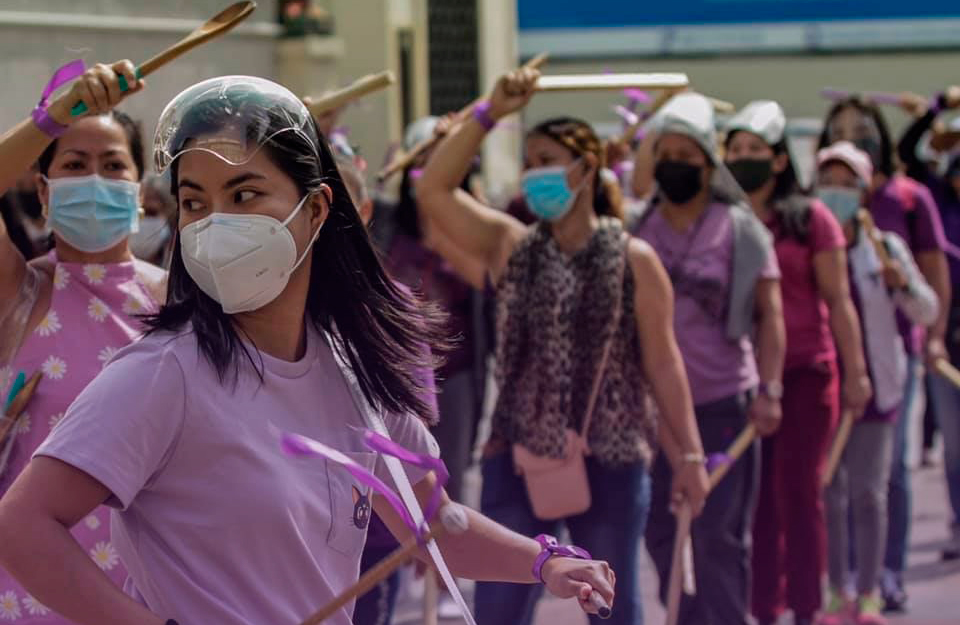 2021: Feminist Resistance and Solidarity Around the World

Across all continents, women are organized and struggling to sustain life.

Around the world, the challenges faced by women have been amplified and laid bare by the COVID-19 pandemic. Women are the hardest hit by the health and economic crisis. They shoulder all care responsibilities inside and outside their homes. Inequalities and vulnerabilities are aggravated and violence escalates. This is why, on March 8, 2021, International Women’s Day of Struggle, women had to be creative to practice their fearlessness and express how urgent their struggles and demands are. This article brings together the analyses and struggles that participants shared during the “Feminist Resistance and Solidarity Around the World” webinar, held by the World March of Women and Capire on March 23.

Women have created new forms of organizing. Around the world, they have found ways to share their experiences with other women and express their demands and internationalist solidarity, because the obstacles that women face are similar, even when they are many kilometers and time zones away from each other. They struggle to sustain life and resist against an economic model that is anchored in fences, walls, privatization, authoritarianism, and death. But in each region, different movements face different realities and organize their own ways to react.

In some territories in Asia, such as Pakistan and Afghanistan, women face the rise of religious fundamentalism, now seen as a third wave. “The feminist movement in Pakistan is calling for the end of physical and sexual violence against women. Religious groups attack us, claiming blasphemy. In our country, blasphemy means you’re against religion. When we fight for freedom, these people say we are blaspheming against their beliefs. This is just religion being used as a tool to silence human voices,” said Bushra Khaliq, a member of the International Committee of the World March of Women.

Some African countries held elections this year, and the feminists expressed their solidarity and strength to all the women who have run to gain space in political power in their countries. In Ivory Coast, which held presidential elections in early March, the number of women running for legislature went up to 15% from 10%. Solange Koné, from the International Committee of the World March of Women, stressed how important political education is to allow more and more women to be in those spaces and change politics.

All across Africa, women have used communication and media tools to express their struggles and state that women’s rights must be assured and respected. “There is also a struggle to make sure March 8 is not just a generic date. We must affirm the political meaning of this date, always,” Solange said.

Women in the Middle East and North Africa region resist war, violence, segregation, and imperialist and colonialist economic sanctions and blockades. Ruba Odeh, a feminist militant in Palestine and member of the International Committee of the WMW, denounces that women suffer “with unequal access to health care, especially in light of the conditions of the pandemic. Poor countries are not having access to the vaccine. The poor of the world should have the right to receive coronavirus vaccines, just like the rich.”

Women from the region are experiencing the escalation of Zionist and imperialist projects against the Palestinian people, sectarian violence that has increased against the Iraqi people, the threats against grassroots achievements in Tunisia, and the blatant violations of rights and freedoms in Morocco. Kurdish women fight against torture and political incarceration perpetrated by the reactionary regime in Turkey. In Lebanon, women still face the consequences of the massive blast that hit its capital city, Beirut, and the economic collapse. In Sudan, they witness the devastation and loss of houses and land.

In several countries, women brought their voices together during the International Women’s Day of Struggle. They took to the streets in Morocco, Kurdistan, Lebanon, and Tunisia, bringing their mottos and calling for feminist solidarity.

A member of the International Committee of the WMW, Vânia Martins, from Portugal, said the pandemic in Europe has led to increasing poverty and sexist violence. This is why, during March 8 and continually, the feminist movement is centered around the struggle for equal pay, the appreciation of domestic and care work, and against the capitalist and racist system that exploits and criminalizes Black and migrant women.

During the pandemic, women are feeling an increase in precarious and unsafe work. The overload of domestic and care work and remote work have forced many women, who are exhausted, to reorganize their lives to manage responsibilities and duties. Vânia also pointed out that even though women’s rights have apparently advanced more in Europe than in other regions, that is just a superficial progress. “Because these advances that we have are based on capitalism, and when people can’t afford to buy things, poverty increases.”

In the Americas, March 8 was a moment to renew strengths, making the sustainability of life a transformative pillar. The countries in the region are not only facing the pandemic, but they also have endured environmental catastrophes caused by the growing destruction of the planet and climate change caused by the current model. “We see conflicts in the territories where we live, which have been systematically devastated by the neoliberal system that destroys our ecosystems and turns everything in its way into profit for the transnational financial system. It turns even our bodies into commodities,” said Mafalda Galdames, of the International Committee of the WMW.

Mafalda looks back at great Latin American women who inspire struggles to this day: “Bartolina Sisa in Bolivia, the Mirabal sisters in the Dominican Republic, Gabriela Mistral in Chile, Haydee Santa María in Cuba, just to name a few sisters that have left their traces and from whom we have inherited the warrior spirit against slavery, the political fervor against dictatorships, and the poetic message from the voices of America.” She also recalls that, to move forward, we must keep the memory and the lessons of feminism throughout history and around the world alive.

Women struggle for equality, freedom, and self-determination. They face violence, hatred, racism, misogyny, and intolerance. To build grassroots, anti-capitalist, and anti-racist feminism, solidarity and resistance combined are the radical method of action, survival, and change that unites all women and allows us to keep struggling, on March 8 and always.