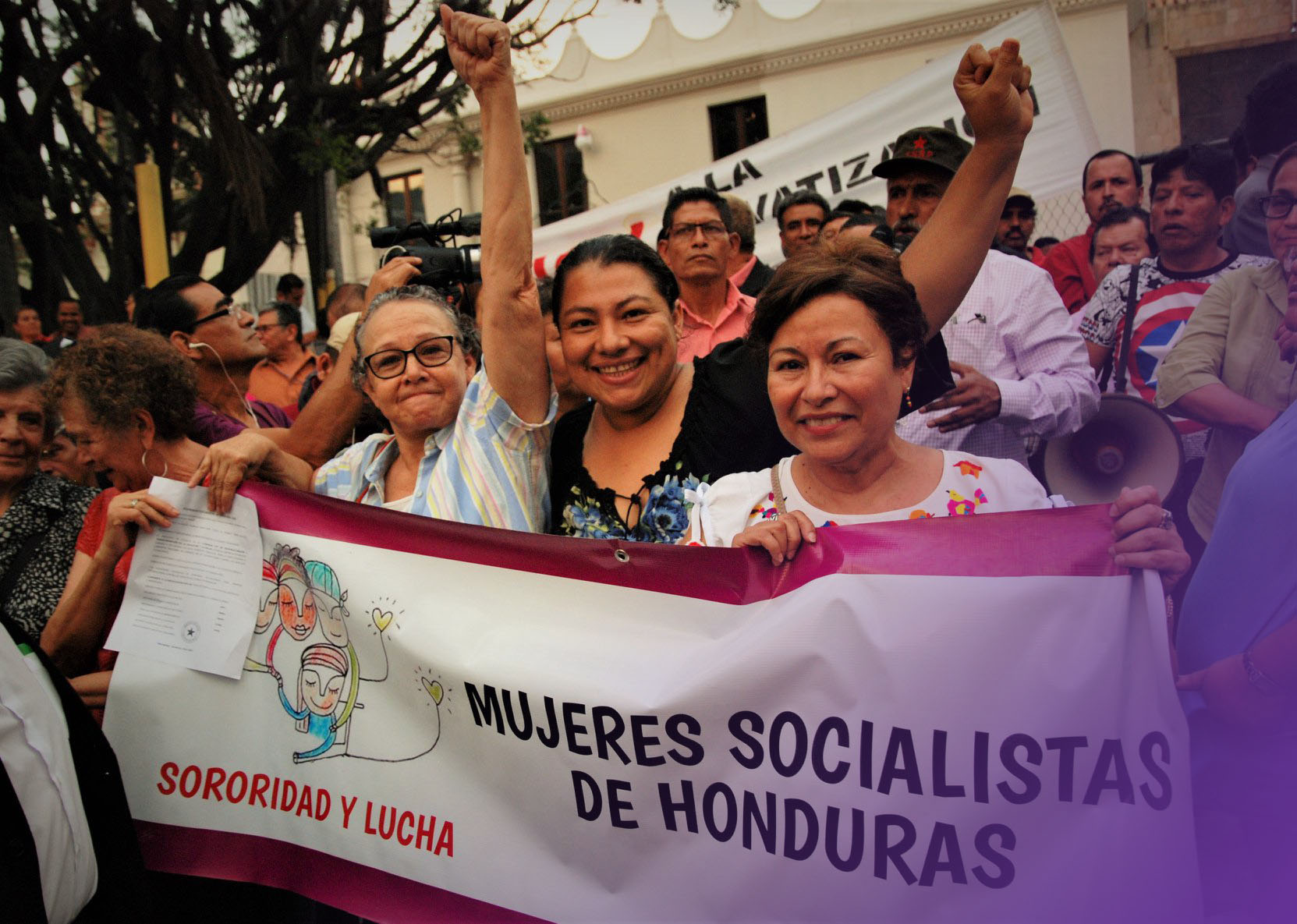 Honduras is enduring a bleak situation, and it has been getting increasingly worse since March 2020. Because of the pandemic, we have been, and still are, confined to our homes, which often means living with our perpetrators. At our households, we shoulder so many responsibilities, raising our children and caring for everyone, whether relatives or neighbors. Women bear the responsibility for their children during remote learning, which includes handling issues involving technology and internet access. Adding to that, now there are victims of hurricanes Eta and Iota, who find themselves in a precarious situation after these tropical cyclones hit their areas.

Moreover, over the past year in Honduras, we once again witnessed how inequality, poverty, corruption, and violence force our compatriots to migrate in search for a better life, even if that means putting themselves at risk. The Juan Orlando Hernandez regime believes they can stop people from migrating by blocking the borders and deploying more military assets to prevent our people from crossing the Guatemala border checkpoints. Still, people keep finding new ways to leave the country and its precarious conditions. Many have lost their homes and leave holding their children in their arms. Entire families are fleeing the country.

Over the course of 2020, the domestic abuse helpline (911) has received more than 70,000 calls. The state of Cortés recorded the largest number of calls and it is also the most severely affected by tropical storms Eta and Iota. Data from the Center for Women’s Rights, which has been visiting shelters across the country, show that there were more than 37,000 calls reporting domestic violence—an average 3,711 cases a month— and 517 reports of sexual abuse.

Adding to that you have the effects of the hurricanes: 10,000 people cramming in overcrowded shelters, while many others are homeless because they were not able to save their houses. The shelters do not provide the conditions for women and children to stay during the emergency. We have visited shelters in the north of the country a month after the disaster. We saw women having to share bathrooms without partitions with men. Organizations such as the Quality of Life Association (Asociacion Calidad de Vida Honduras), which supports victims of violence in the country, the Movement of Women for Peace “Visitación Padilla” (named after the Honduran feminist militant), and the North Region Center for Women’s Rights (Centro de Derechos de Mujeres de la Zona Norte) have paid visits to the shelters to investigate reports of sexual assault afflicting especially girls.

Aggravating even more the harsh reality of these women who have lost their homes is the violence promoted by the Honduran state, which has been escalating for years and reflecting in the migrations.

Now there is yet a new migrant caravan being advertised to people who have lost everything due to the storms. As Joe Biden has been elected in the United States, false claims are spreading in Honduras about how the US would lift border restrictions and offer jobs and issue visas for everyone. And people are risking everything because, after losing their homes and livelihoods, they have nothing else to lose in their home country. Many are living on the side of the road. The images of the caravans are shocking, with women carrying one child in each arm.

Hurricanes Eta and Iota have affected 3 million people, of which 15.2 percent are older adults and 34.5 percent are children. The combination of COVID-19 pandemic and the impacts of Eta and Iota, with no safety and security measures, creates a brutal reality. Hospital supplies sourced in the beginning of the pandemic have yet to arrive in the country. Rapid tests are no longer being offered because there are no testing kits, which objectively means a setback in healthcare.

The Torments of Capitalism

It is the people who are responding to the emergencies resulting from the pandemic and the hurricanes, because the State has not been holding itself accountable and is virtually plundered. Millions and millions of dollars are flowing to pay a public debt that we and our children are supposed to pay. Campaigns and protests have been taking place, asking “Where is the money? Where are the hospitals?” The social security system paid for by each and every worker is no longer providing public healthcare services for COVID-19 patients. The hospital that used to take in patients with cardiac and respiratory symptoms is crowded. The situation is becoming increasingly worse.

We hear that January is going to be a difficult month, as the number of cases is expected to grow in the north due to the poor conditions of local shelters after the floods. Many people are not able to return to their homes, which are roof-deep in mud. In December, 76,000 people were staying in shelters, 180,000 had been evacuated, and 184,000 people were isolated after bridges and roads used for food transportation were destroyed. Many peasants lost their lands after the floods turned them into rivers where they can’t grow anything. The organizations that are part of La Via Campesina and the Council for the Integral Development of the Peasant Woman (Consejo para el Desarrollo Integral de la Mujer Campesina — CODIMCA) are holding actions in solidarity with comrades who have lost their homes, their livelihoods, and their crops. Feminist and class solidarity is permanent and solid, unlike the hanger-on charity initiatives that offer people a bag of beans and rice just for the photo op.

Hunger is going to hit the country even harder. The government says they will borrow more money. In December, the Central American Bank for Economic Integration (CABEI) approved US$90 billion in loans, allegedly to “reactivate the country’s agriculture.” Before that, 4 billion lempiras (the local currency) had been allocated to the military to encourage agriculture, and our question remains: where is the money? No support has been granted to peasants—it’s actually the opposite, they are largely disregarded.

Unemployment, crime, and evictions are also on the rise. Businessmen claim that increasing the minimum wage right now would be catastrophic, but the last wage bump in the country was many years ago, and it was as low as 200 lempiras (less than US$10). This represents around 3 percent of our current minimum wage of 6,762 lempiras (approximately US$278).

The measures to prevent the spread of COVID-19 have taken a toll after the storms. As more people move around, the number of cases has increased. The lack of testing capacity leads to lack of data, and we have seen people close to us getting the virus and even losing their lives. We have also seen cases increasing in the United States and other countries, because they say December is “a good month for the economy.” They put their monetarist views on the economy before our lives. This also explains why Special Economic Zones (SEZ) are still operating. These zones established in Honduran territory are free-market-driven areas that are politically, legally, economically, and administratively autonomous, and that objectively means that Honduran territory and common goods are handed over to foreign capital. Their operations have not been halted. Despite the pandemic and the impacts of the hurricanes, they keep moving forward with their processes of dispossession, banishment, and criminalization of our people.

Many have been murdered for opposing the coups and the 2017 electoral fraud. Those who stand up for water, land, and territory are being criminalized. Nine comrades have been incarcerated for over a year and have not yet been brought to trial. The country continues on a path of dispossession, forcing people to move abroad and send money home (in foreign currency remittances). In 2019, during demonstrations that exposed the country’s attempts to privatize its education and healthcare system, the student Rommel Valdemar Herrera Portillo, who was being held as a political prisoner, was tried and found guilty of being an accessory to an arson of the entrance of the United States embassy in June that year. An individualized sentencing hearing is scheduled for January 15th, and, until then, he is not allowed to go back home.

Meanwhile, those who have stolen millions of lempiras in the country remain free. This is not a broken State—it is a state that works only for a few.

Amid the pandemic and after the natural events Eta and Iota, we, Honduran women, are enduring a precarious situation, but we are starting to wage a new struggle against a history that has invisibilized our rights. The year 2021 is expected to be very difficult, and that means it will be a year of great struggle. The Honduran State is not concerned about women’s lives. It is up to us to join forces to survive this great capitalist and patriarchal violence and achieve everything we dream of as women.

Yamileth Gonzales is a member of the Honduras Women’s Socialist Movement (Movimiento de Mujeres Socialistas de Honduras) and is part of the 25th of November Platform (Plataforma 25 de Noviembre), which brings together feminist collectives from across the country. Both organizations are part of the World March of Women.