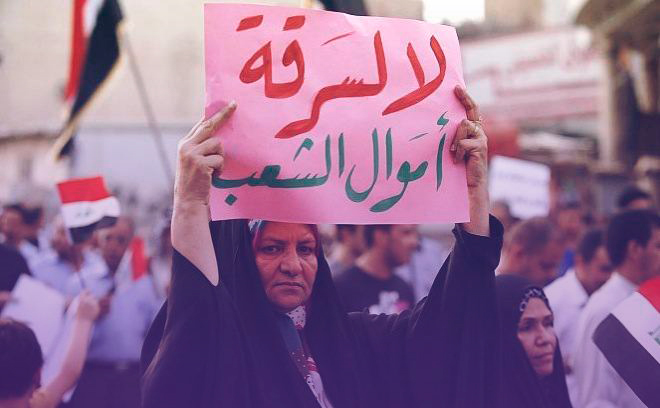 Breaking the Line that Binds Poverty and Women in Iraq

The World March of Women Iraq offers a reflection on neoliberalism, oppression against women, and poverty.

By World March of Women Iraq

Poverty is that line that is meticulously drawn according to international specifications and comparisons. Through it, by using analogies, we can measure suffering and shortage, which are reflected in our everyday lives and reduce people’s standard of living. Poverty is the inability to meet the minimum necessary to afford a decent standard of living. It is what casts a shadow over and sheds light on the threshold of deprivation or the minimum necessary to support oneself daily, similar to a drip-feed.

Women are not safe from such poverty—quite the opposite, they are the most vulnerable to it. Poverty does not affect one gender only, and there are so many women who cross the poverty line, its successive curves, as they make long journeys from one side to the other of it or pass across graphs with meandering lines to keep their breathing rate.

Women’s dilemma lurks on the line of society’s dilemmas. In neoliberal societies, the imperialist media machine and local authorities recurrently legitimate sexist discrimination. More and more social and economic crises emerge, which are kept out of sight or are twisted to push women away from societal issues, especially those in which class is a root cause. Women exist socially, and their problems are not far from the problems of the “mortgage” society with its bonds that are dependent on relations of production, prevailing in the ruling mode of production and cultures.

Each time, the regime presents a number of arguments and means to create adequate grounds for the continuation of reactionary laws. Poverty imposes restrictions on a person’s perception and a miserable view of what the individual may be, especially when religious beliefs are used to justify the phenomenon of poverty, as if it were divine will. Religious confidence belongs to those who hold power with the purpose of maintaining poverty and keeping the poor content with reality in the service of capital. It’s a crime, an attack on the human being, as some of these aspects have become acceptable to women themselves. The phenomenon of oppression against women did not appear as an emergency and it cannot hold without the interest of authoritarian classes. One manifestation of that is how the social-economic system is organized.

Oppression against women starts with the division of labor between men and women and within families. Over the course of history, women’s condition is defined as they are placed second. Class conflicts result from that, as well as an unequal division of responsibilities between men and women, revealing the oppression and the place women hold in society. Poverty, which is realized in real life, becomes women’s property, as they continue to struggle with barbaric capitalism. This is a model that builds an economy isolated from humanity, which sees people’s suffering as an abstract topic. The most important thing for it is capital accumulation.

Neoliberalism remains ready to serve the rich to the detriment of the poor and to turn people into things. Its essence is the exchange between commodities, not the relationship between people. In this day and age, women struggle with the lack of access to the spaces of production in our Arab and Maghreb countries, where production is almost nonexistent or limited to light and complementary industries. Women experience intense competition for opportunities in the production process, and have their bonds and attitudes affected by that, depending on their position in the relations of production. They become prisoners of reality, spiraling down underemployment. Discrimination is conspicuous in the job market under capitalism, which is apparent in wages and the type of formal jobs that are offered to women.

The gaps between men and women when competing for jobs in the private sector are manifested in the need to have a previous relationship with employers—usually, men. They can’t land jobs in small businesses, as they are under the heel of big businesses that hold more capital. And because they don’t know about it, many women workers do not organize in unions that could protect their rights. Therefore, the number of unionized women workers is still very small.

There is no one solution for women’s problems, as they are pervasive across so many levels, without establishing an alternative social system to meet women’s demands and rights and to achieve freedom. This requires working-class social movements to be strong and, drawing from liberal and socialist forces with women’s participation, organize efforts, energy, and resistance to build a classless human society based on equality and social justice.

This article is authored by the World March of Women Iraq and was originally published in the Sairat Journal, the WMW blog in the MENA region (Middle East and North Africa)