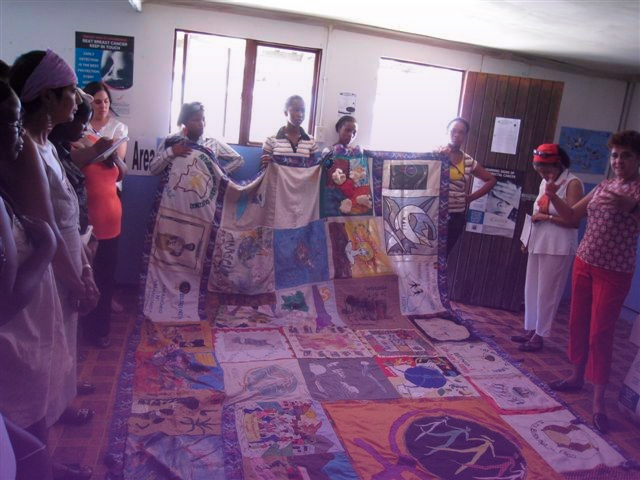 Amandla meaning “power”. You can answer, and usually we answer in South Africa, “power to the workers,” but in the World March of Women we always say, “Power to women!” I feel a bit overwhelmed by the importance given to South Africa, because our struggles and our challenges seem to be minuscule compared to what is happening in the rest of the world and especially in other parts of the continent. I have been asked to talk about the state of the women’s movement in South Africa, as we observe Africa Women’s Day to commemorate the Pan-African Women’s Organisation (PAWO) conference held in 1962 in Tanzania.

For us, in the World March of Women, I think we must not be distracted from what we are fighting for, what our goals are, and our vision is. What attracted me to being part of the World March of Women was that the focus was on the root of the problem of exploitation and oppression, raising awareness that we are fighting a system, capitalism, an economic system that aims at widening the gap between the rich and the poor as it is based on putting profits before people’s needs, plus it is a patriarchal system that marginalizes women. It therefore becomes imperative that women come together and organize themselves to fight this oppression.

Before 1994, South Africa was governed by an oppressive system called Apartheid, which did not recognise Black people as human beings and segregated people based on the colour of their skin. So, when we fought this oppressive apartheid system, women and men together, the struggle for women’s rights was not the priority. We had a common enemy and that was the Apartheid capitalist system.

The new era of democratisation did not change for most women (and Black people) in South Africa, as the Apartheid system collapsed in 1994, but not the capitalist system. The struggle continued against capitalism but also against one that further oppressed them, patriarchy, as the transfer of power was amongst men.

In South Africa, our political space is based on ‘party’ politics. In 1994, the African National Party (ANC) became the ruling party and has been in power ever since. The ANC has its own Women’s League (ANCWL)  – like FRELIMO (Liberation Front of Mozambique) had Forum Mulher. But unlike Forum Mulher, that became independent, the ANCWL remains a strong wing of the ruling party.

When we talk about women’s struggles and feminism in South Africa, people immediately focus on the ANCWL. The ANCWL remains subordinate to the power of men in the party. An example of this is illustrated by the recent political events. Many questions and concerns have been shown around the recent looting and destruction of infrastructure that happened in South Africa, that you have been witnessing on your television screens or through social media platforms. It is evident that it is connected to the incarceration of the ex-president Jacob Zuma. His incarceration came about as a result of him refusing to testify before a commission set up while he was in power to investigate several cases of corruption.

Some time back, this very same president was up for a rape case. It was incomprehensible to most women that the ANCWL supported Jacob Zuma during his rape trial. It’s not an easy battle within the South African context to build the women’s movement, to compete against a political party that is so strong and popular. Therefore, it is very important to build strong civil society organisations and to try to organise the World March of Women in South Africa.

Women’s organization during the pandemic

Throughout the history of South Africa, when men left their rural homes in search of work on the mines and cities, women were left to care for the house and family and tend the fields.

In order to survive, the women organised themselves in what we call “stokvels” or “savings groups”. They came together to exchange and share their skills.

The pandemic has opened a need to revive these indigenous knowledges and rekindle these groups. Women came together forming groups in different communities to cook and feed the homeless and those who had lost their jobs. Thousands upon thousands of people are being fed on a daily basis by these soup kitchens. South Africa remains one of the most unequal societies in the world and the pandemic has made it more real.

It’s interesting that African Women’s Day focusses on economic empowerment and financial inclusion. A lot of emphasis, especially coming from women’s movements in the North, is on entrepreneurship, encouraging women to start small businesses, on making money. “That way you are going to enrich yourself and have a better life”, they say.

We should be cautious and not fall into the capitalist trap, which places emphasis on making money. In the World March of Women, we must remain focussed on our demands for a Feminist Economy, our demands for the recognition of invisible reproductive work to be included as part of the economy. That work in all its forms needs to be recognised and valued. It is the recognition of the key role women play in our society, focussing on what is the root of the problem: fighting a system that oppresses and keeps us in a spiral of poverty and inequality, a world that maintains the power of men over us.

There are many women in leadership positions in Africa, which we celebrate. Women occupy several seats in parliament. But we must not forget that those women who are in parliament are as strong as we, women on the ground are, organised grassroots women are. They are as strong as the voices of those women who are unheard on the ground are. Because the women in parliament in those powerful positions are so easily co-opted into the male dominance and the patriarchal circles.

The voices of the World March of Women, marching in the streets, should be loud and clear: “down with capitalism”, “systems change”,“vaccines for all”, “people before profits”. These voices must be strong to encourage those women we have voted into decision-making structures to fight for meaningful change. Amandla!