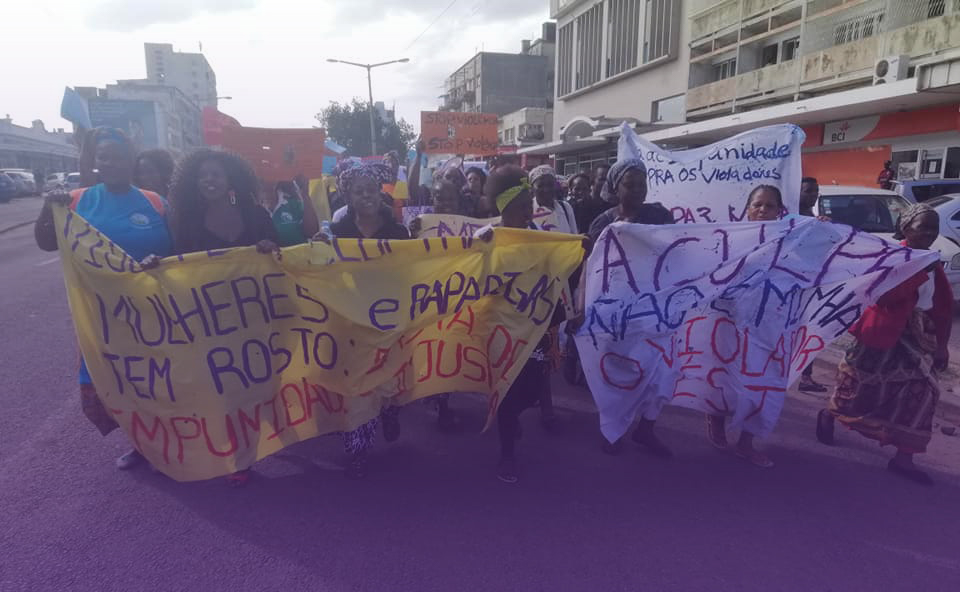 It is difficult for Mozambican women to find spaces to share and collectively reflect on motherhood and sexuality. In Mozambique, women often have many children because they have to, even when having kids does not fulfill a desire or a warm feeling about being a mother. The reality of armed conflicts reinforces the role of motherhood in feeding the war itself. The great issue of malnutrition devastates the bodies of women, who may be starving and still have to find the strength to feed their babies. These are a few examples of how motherhood is a matter that involves an entire social and economic organization, and not just each woman’s private life.

Women are expected to become mothers and often to be the sole caretakers of their children. They are expected to have an answer for everything. As feminist women, we stand up against these expectations placed on us. “We don’t have a degree in motherhood,” we say. However, we still face many challenges, as women struggle to speak up and share their reality.

Our feminist intervention in the country is about creating spaces for conversation and strategies to make healthcare access easier for women. Women’s needs must be carefully considered. We support women to build groups to increasingly organize their healthcare demands.

No more control over and commodification of our bodies

Regarding sexuality topics, one of our most striking experiences took place in 2012, when we protested against a national brewery plant that was advertising the launch of a new product using a bottle shaped like a woman’s body. Our public claim about the sexualization and commodification of women’s bodies was taken to the Office of the Attorney General, which welcomed our claim and ordered that the ad, which was circulating across the country, be taken down.

This case achieved good results, but it is important to make it clear that public institutions are also accountable for several forms of control over women’s bodies. We are not allowed to walk into public buildings wearing certain pieces of clothing, which is a tool to exclude us from public and decision-making spaces. We live in a conservative, unreceptive State that blocks any conversation about sexuality.

Another case that illustrates our reality was the episode of a young woman who was appointed as governor and had private photos of her exposed. This was used to discredit her professional and political skill. We held a public intervention exposing once again the sexualization of women’s bodies.

In terms of organizing, we still have a long way to go. We are dedicated to promoting political education in order to recognize inequalities. So that women can recognize the many different tricks patriarchy uses to make us accept certain practices as if they were natural or normal. These practices put women in a submissive position.

Some groups are constantly trying to confuse society, claiming that our intervention is an attack on the government, and therefore we are serving the interests of the West. Every form of organizing that aims to occupy public spaces and deconstruct this logic of oppression is discredited by conservative institutions and by the privileged. It happened to us. We received messages via social media slandering and threatening us.

Specifically in Maputo, the capital of the country, “new” conservative phenomena started to emerge, such as the case of women who are becoming “home guides.” These are completely patriarchal relationships in which some women attain a more public position in society through social media. This representation atrophies women’s mentality. It is an image that guides women toward the home, in favor of the patriarchal system. We see conservatism expanding beyond official institutions, moving toward these new figures in society that maintain and refresh patriarchal practices against women’s lives. They enforce conservatism by promoting an idea about a culture of wellness, distorting reality.

We called for a revision of the Penal Code in 2014. One of its articles established that cases in which the sexual assaulter marries the victim would not be tried as a rape crime. We argue that marriage cannot be used to legitimize violence or to invalidate this crime, and we say that every form of sexual abuse must be punished. The article is grounded in a patriarchal system that sees the satisfaction of men’s sexual needs as natural, so it is usually excused and not punished. In many rural communities, where institutions are just starting to provide services, cases of sexual violence are not reported to local authorities. Arrangements are made between families, “friendly” agreements to cover up these situations. Many traps were set during the Penal Code revision process. They are directly connected to the matter of women’s sexuality, autonomy, and bodies, and our struggle is to eliminate them. There is always the risk of setbacks and attacks against established rights if we are not alert.

Political education is a space in organizing that allows women to recognize and be more open about their sexuality and body. There are still few women who publicly conduct work based on what they learn in political education spaces, but, for us, these spaces have been a channel to organize our political thought and acknowledge our autonomy and freedom.

Within institutions, conservative forces are trying to promote legislation overhauls and revisions to accommodate private interests. These private interests are related to men’s interests. Many are engaged in polygamous relationships, even when they are in a monogamous marriage. Having many relationships and even different families simultaneously is a man’s privilege, something that is praised by masculinity and something that women don’t do.

Many women accept polygamy because having a husband is something that gives them a false sense of position in society, dignity, and subsistence. A woman without a partner, in this patriarchal society, is seen as if she didn’t exist. It is a challenge to strengthen an understanding that we may have a sense of fulfillment that comes from ourselves. Men who have different families with different women at the same time make them believe that they are officially their husband, but there is no document to prove that. Many women long for their rights as wives, but there is no official relationship in reality.

It’s important for us to understand the relationship between sexuality and control, and consequently the roles imposed on women. Most Mozambicans live in rural areas, where older women often find younger women for their own husbands. What happens is that these women’s roles are displaced: from wife to mother. Older women then become the caretakers of their husbands as if they were their children. They organize their husbands’ lives and make sure to satisfy them sexually by mediating the husband’s relationship with younger women.

These polygamous relationships are always with younger women, as if this were the way to measure masculinity. An individual with a relationship with a younger woman achieves an improved performance status, becoming “more manly” compared to others. Meanwhile, as women become older, they are encouraged to see themselves as less attractive and less able to feel pleasure.

We need to deconstruct pleasure as something that is given to us by someone else. To expand the understanding of our body and freedom to collectively talk about the phantoms of sexuality. Every stereotype created around female sexuality is infused with shame, guilty, and fear supported by patriarchal and capitalist control. Debunking these tricks is a step toward women’s autonomy, for us to be able to experience pleasure, free from oppression.

Maira Domingos is a World March of Women militant in Mozambique and the program director at Fórum Mulher.