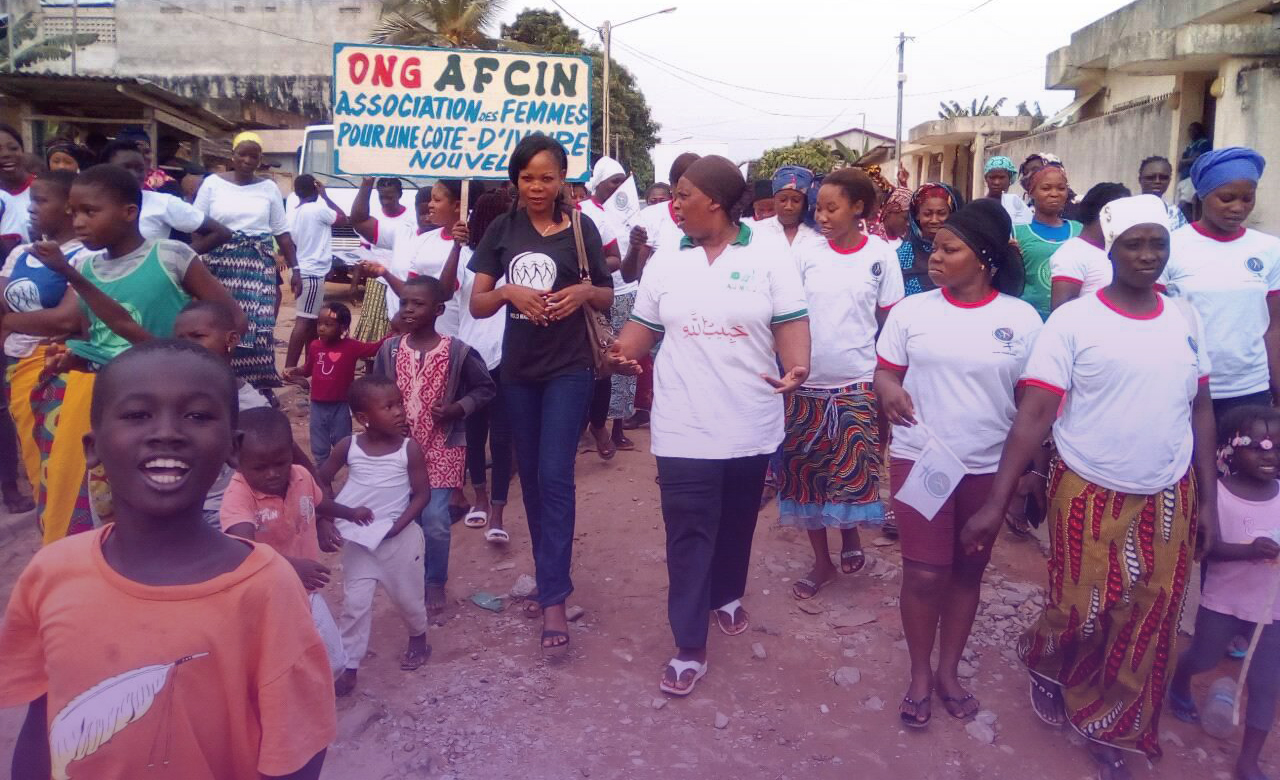 Women’s Political Participation in Ivory Coast: A Mission for Peace

In this interview, Solange Koné talks about women's political participation, the challenges of the pandemic and feminist practices for peace

The World March of Women (WMW) Ivory Coast first emerged in 2004. The country was facing a civil war and women organized to attend a meeting in Mali about women’s participation in peace processes. During that meeting, a WMW sister from Burkina Faso expressed her solidarity with and support to the women from Ivory Coast. Through the practice of international solidarity, as a constitutive part of the World March of Women, women organizing in Ivory Coast learned about and decided to join the movement.

Solange Koné, a member of the WMW International Committee, spoke with Capire about women’s political participation today in the country and about how they organize the struggle for solidarity and peace. She argues, “women need to be really involved in conflict resolution. We need to think objectively about the links of violence against women with the battlefields.” Read the interview below:

We understand that the political participation of women who run for office is extremely important, because it allows us to change politics from the inside. Moreover, election processes give us the opportunity to elect a more representative government, which can better consider our economic agendas. Could you offer us a brief analysis of the situation of African political processes and women’s participation?

Political processes in Ivory Coast are extremely discriminatory. There are several laws and texts that claim to “speak for women,” but include articles that bar women from participation processes. For example, with quotas.

They say women should hold at least 30% of elected positions in assemblies. Meanwhile, election processes are held in all regions and women are not given priority when there is only one position available for them, which is the case in many regions. Our legislation makes no sense, as it is not enforceable in different local contexts.

Political parties in our country do not give prominence to women. It is generally men who hold the top positions. Women remain in their shadows, which is not normal. When we look at institutions such as the National Assembly or the Economic and Social Council, there is not one woman spearheading them. Women are always part of commissions, as if they were not capable of making decisions or think.

During election campaigns, women are limited to welcoming people. They greet them, get them water, etc. Where there are reflections and where decisions are made, they are the minority. When there is a vote, the results are against them. In terms of politics, at least in my country, women’s situation is difficult, and this is what I denounce.

During the webinarFeminist Resistance and Solidarity Around the World, you mentioned that the percentage of women running for legislature in this year’s elections in Ivory Coast went up from 10 to 15 percent. Who are these women and what were their proposals? What is the reason for this increment?

I don’t consider this an increment, because women today are very much able to be well represented. They exist. There are women who are intellectuals, entrepreneurs, politicians, farmers. They are leaders. From a leadership point of view, they are really taking their place. This should go hand in hand with their political representation. But, unfortunately, this is not the case. We continue to follow the logic of the choices of political parties. Independent women cannot get elected because they don’t have enough funds. You need a lot of funds to run for office.

Financially, women are still not able to occupy their place and organize a campaign. From the point of view of support, at the level of the World March, we try to assess what we are able to do. We start to find ways to support women who are running for parliament, for city or regional government, or for president. I know we need a lot of funds, but we have to start somewhere. I would really like to point out the solidarity between ourselves to push women forward.

This is a really important issue: to expand women’s political participation, especially for left-wing women and grassroots feminism, we have to fight to democratize politics, so that the elections don’t depend so much on money. In this sense, we would like to understand what is the connection between elected members of parliament and the women’s movement? How is the movement organizing to fight the political battle during and after the election process?

It’s a shame, because I believe unity is strength. But we still have not been able to establish these relationships. We have just seen the elections that were held with this perspective, and we want to address women in politics. We may not necessarily share the same ideas, but we have a lot of struggles in common. We have a lot that we can stand up for together. The National Assembly has just appointed the president. In June last year, women got together to propose routine activities around topics related to promoting women.

As a movement organized by women, do you have alliances with other social movements, such as peasant movements, for example?

We are in contact with the association of women traders. They are many. We are also in contact with teachers’ unions, with media outlets connected with the creation of land rights. We believe we must be close to all of this. Right to land, economic, political, social rights. Building alliances is something very strong to us.

We want to learn about the history of women’s struggle and organizing in Ivory Coast. Could you share stories of struggle that inspire women?

When Ivory Coast was fighting for independence, there were colonial powers. Most men from the political parties that were to seize power at the time were sent to prison in a town near Abidjan, Grand-Bassam. It was a difficult prison at the time, and it was where those who were rebellious were sent to. Men were sent to prison and women became household heads.

At some point, a female leader called Marie Koré said: “We can’t watch our husbands remain in prison, especially without knowing why. Is demanding independence a crime? We believe we have done enough in terms of colonialism and now we want the independence of the country. This is why our husbands are in prison. So, women, let us go to prison too!”

When she launched this call to the Union, women from all over responded. Women who know how to read and write, women farmers, women traders, women from impoverished areas, wives of fishermen. They walked at least 50 kilometers all the way to the prison where their husbands were being held. They walked so resolutely, the military forces were not able to stop them. This is how they were able to free their husbands. Mari Koré is an icon in Ivory Coast.

During the webinar, you talked about Tanzania’s case. The vice president took over after the death of John Magufuli and was able to tackle the pandemic better than her predecessor, who was in denial about the reality of COVID-19. Can you tell us how you have organized during the pandemic?

Regarding the pandemic, the movements carried out a huge number of actions in favor of the communities. We made bulletins about prevention, to share a message about what people should do.

During and after lockdown, there were many cases of domestic violence, sexual abuse, child abuse, etc. We reported and denounced all that.

Medical services were also contacted, because children and women were not safe. We conducted a survey and questioned the government. A study was also conducted on the impacts of COVID-19 in healthcare services for women and children. We worked a lot with the Health Ministry. Right now our concern is the vaccine. Not everyone wants to get the shot. We try to explain why it’s important. On the other hand, we are trying to pressure the government to take the responsibility for the vaccines and prevent more serious consequences.

The pandemic, the vaccine, and politics in general have been targeted by fake news and disinformation campaigns. What is your take on this issue? Also, do you have strategies for feminist political education to tackle the disinformation spread by the right and to increase grassroots feminist participation in politics?

Right now there isn’t really a strategy that stands out. The way the pandemic hits is like it sucked the strength out of people. We didn’t know where to take things, information was conflicting, and, also, we didn’t know the situation, we have never experienced anything like that before. We were receiving scary images of serious situations.

There was already this fear, a situation that wrecked people, made them unable to act and think about strategies. Now I see that we are in a logic in which capitalism will continue to put pressure on us, because we are facing the battle for power between the big actors in this world.

Right now, in the case of the vaccine, we ask here in Africa, “Why has malaria been around for so long, why has HIV been around for so long, and how come there hasn’t been a vaccine for HIV right away?” And now we have so many vaccines for COVID. This shows there is a lot behind this. It’s the big industries that continue to look for positioning to get more profit. We see that.

In our countries, they said the WHO [World Health Organization] is going to support us, it will give us vaccines through the COVAX initiative. Who is going to donate these doses to Ivory Coast, Senegal, and other countries? I heard 500,000 doses arrived in Ivory Coast. It’s a vaccine that requires two shots for each person, which means 250,000 people will be vaccinated, out of 25 million in Ivory Coast. It’s a drop in the ocean.

We, the social movements, wonder what is behind this free offer. The vaccine was produced, it cost something. They can’t come to a country and claim it’s free. Our response to that is “no.” There is definitely something behind that, and we will do our homework to learn what it is, and together, as social movements, we will understand what will be the results of this, so that we are able to take appropriate action.

If this is something to strengthen their rule over the poor, over women, we will be there to denounce this economic and hyper-political rule. We agree to join the struggle against the pandemic, but it can’t be at any cost. We must make this clear. So we’ll wait, but we will not sit idly by. We are trying to understand things. And if these things are in the middle of this battle for power, if women and children are marginalized, we will not agree with it.