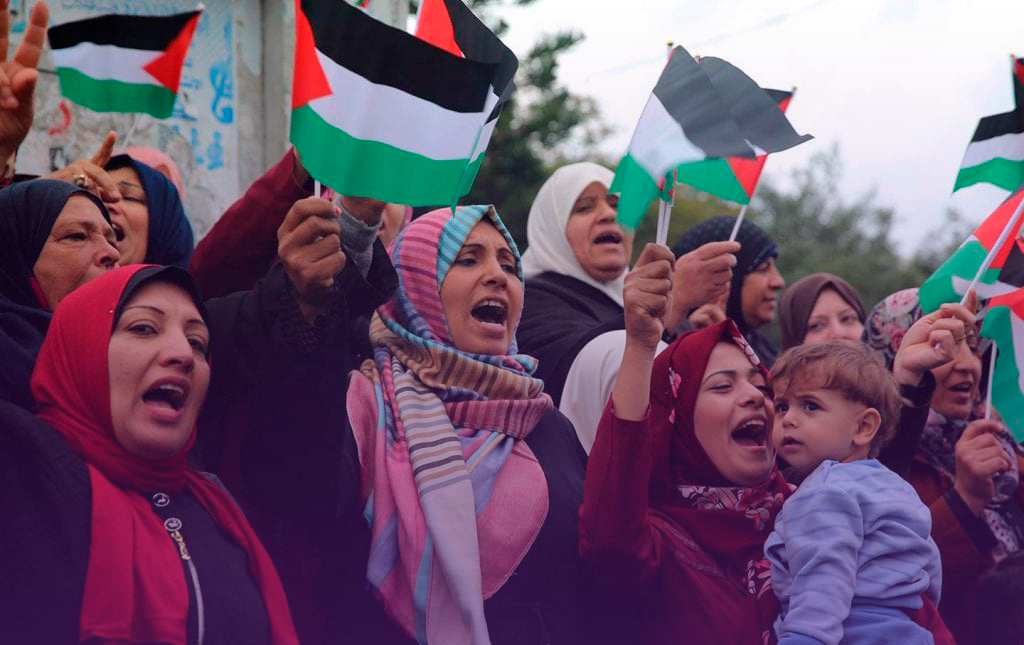 Palestinian Women Between Poverty and the Struggle

Fighting the exploitation of labor, poverty, and colonialism are feminist issues.

By World March of Women MENA

The phenomenon of poverty has been historically related to class differences. These differences, in turn, are caused by the unequal distribution of resources between the people in societies. On the one hand, there are those who own and reap surplus value. On the other, those who work and produce, but still don’t obtain enough to survive or who are even pushed out of the system and become subjected to a cycle of hunger, ignorance, and disease. Wealth is concentrated in the hands of a small number of owners of global monopolies. With ever-increasing greed, they use all possible methods of control over the capacities of the universe. What they can’t take control by force is hit back with more force.

In this context, there are many forms of exploitation, whether within societies or from colonial powers against other peoples. Palestine continues to face the Zionist colonial project, which constitutes a major component of global imperialism. We can become weaker or even be defeated if we separate women’s struggle for freedom and equality from the struggle of the peoples for autonomy and sovereignty, or the struggle of the poor for social justice. This separation contributes to increase the control of governments over the peoples, as they use falsely democratic, merely formal slogans, subjugating, dividing, and distracting fighting forces with details, at the expense of a strategic program toward revolutionary change.

Poverty is indisputably a social, economic, and political matter, intertwined with the aspects we mentioned above. Nevertheless, it has also been a major driver of revolutions throughout history. It is, unquestionably, the first enemy of equality and even more of the global feminist struggle, which is a lever for change toward a better world.

The Palestinian people lives in a state of intense, intertwined conflicts. On a national level, Palestine is faced with a huge political dilemma, as a result of the continuing and illusory bet on a political process grounded in the principles of the Madrid Conference and the Oslo Accords as a way toward achieving our national goals—a bet that still prevails in the minds of influential leaders. All this is used to cover international and Arab policies carried out in recurring official negotiations with the occupation.

As a consequence, the potential to fight against this becomes weaker, right in a moment when the occupation maintains its colonial policy on the ground. Since the siege, isolation, apartheid, and the latest annexation plan (which aims to take control over 33 percent of the Palestinian West Bank), there is no doubt about the direct consequences of the occupation policies: more poverty and more social problems that affect especially women, particularly when combined with the traditional patriarchal social system in Palestine and the neoliberal policies pushed by the Palestinian Authority¹.

Recently, amid the COVID-19 pandemic, women have become increasingly vulnerable as poverty escalates. Women workers were the first to suffer the effects of the lack of sources of income, because they are the majority working in the informal sector. Private businesses have also played a key role in the impoverishment of women, cutting jobs, dismissing services, and violating labor rights. All this in a moment when 11 percent of Palestinian households are headed by women. The state has failed to take on the responsibility to guarantee a decent life for these families, lacking an integrated social protection system.

A state of emergency to prevent and limit the spread of the coronavirus was imposed without implementing an economic emergency clause that could make rich sectors contribute to and pay for the financial spending resulting from the pandemic. For the lack of such a policy, women have been forced to reduce their household expenses while they wait for official and civil authorities to provide aid, still insufficient and uncomprehensive.

Women, particularly from rural areas, have worked to improve domestic economy. They have used more resources from the land, contributing to fulfill the daily needs of many households. This goes to show women’s great potential to handle catastrophes.

However, this doesn’t mean that official institutions can continue to evade their responsibilities—on the contrary: they are connected with crucial aspects of the legal, social, and political system that should be based on principles of equality and social justice. We cannot lose sight of the phenomena associated with poverty, such as violence and crime, which also affect women the most. Recent surveys show that domestic violence is on the rise in all its forms, which is related to the increase in economic and psychological pressures resulting from the pandemic.

Our organization is facing all forms of discrimination and persecution in Palestine, carrying out activities and projects to fight occupation policies. Examples include our campaigns in solidarity with men and women prisoners and our participation in national activities in defense of land.

Tackling the “deal of the century”² and the annexation plan, activities and campaigns are also being conducted for equality and to increase women’s participation in general, furthering women’s rights and work, changing legislation, and proposing new bills based on the principle of equality. The purpose of the struggle is among the younger generation, which has come together and pushed innovations in many organizations. The National Coordinating Body of the World March of Women, for example, has played an important role in providing social, mental health, and legal services to families, children, and women.

¹  The Palestinian National Authority is the interim self-government body that runs part of the Gaza Strip and the West Bank since 1994. It was first established as a consequence of the 1993 Oslo Accords, and it is controlled by the Fatah since 2013. Under the influence of the World Bank and Western governments, the administration replicates neoliberalism as an economic development model in Palestinian territories.

²  The “deal of the century” was proposed by the Donald Trump (USA) and Benjamin Netanyahu (Israel) administrations and demanded the recognition of Jerusalem as Israel’s capital, allowing Israel to annex Palestinian territories.

This article is authored by the World March of Women MENA (Middle East and North Africa) and was originally published at the Sairat Journal, the WMW blog in the region.