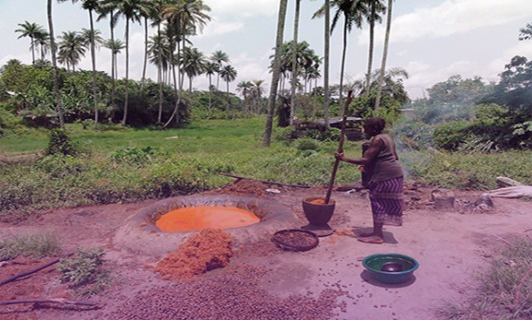 It should be noted that, since the independence, companies have established themselves in Cameroon and, along with the structural adaptation programs imposed by the Bretton Woods system, states have been forced to privatize these huge plantations. So they were passed into the hands of private enterprises, which are purely capitalist organizations. To this day, these private companies generate big oil palm plantations all over Africa. There are around three million hectares of palm trees growing on land that belongs to the population, and women are the ones primarily enduring the consequences of this situation.

First, rural women have lost their land, which used to be their main resource. Women are the ones who need to produce the food for their families, for society. When they lose their land, they can no longer farm, they can no longer grow food to feed their families or sell part of their produce and earn a small income. This alone is already a big form of violence inflicted against them, because they have to do whatever it takes to find food and a livelihood for their families.

Along with plantations, women have also lost water. Water is life. They used to have tanks in these waters, where they were able to fish, and this was how they managed to build up some savings, by selling fish to earn some income and be able to send their children to school. They have lost all of it, because now the water is contaminated with pesticides, chemicals that are sprayed in plantations, and they cannot use this water anymore. And while they cannot use this water anymore, there is no actual compensation. Companies were not forced to drill wells to make sure these women would have access to drinking water, which leads to other illnesses.

Women have also lost the forest. The plantations have destroyed all forests, where they would get non-timber forest products that they could collect, process, and sell to earn money. That was where they were building their economy. They have also lost all their medicine as this agro-industry has been established. Everything was chopped off. Women can no longer breathe fresh air, because now it is constantly polluted.

We have visited a family’s home, as we were there conducting work. It was full of ant nests, and flies and insects would get on us, on our clothes, on the food. These are all forms of violence women are subjected to. Problems caused by capitalist companies that are only interested in making profits and do not see what is happening around them. Women have also lost their freedom of movement.

The Violence Inflicted by the Agro-industry

The companies have dug huge four-meter-wide, four-meter-deep pits, and women are not allowed to access the plantations. The companies have recruited military officers who have been deployed all around. When women leave their bedrooms in the morning, they find soldiers by their doors. These soldiers walk into their kitchens to see if they have collected palm kernels, as they think these kernels are collected from their oil palm plantations—but women also have their oil palm trees. Women have had miscarriages after being abused by military officers. Women have been threatened because they had palm kernels with them.

The most difficult thing to accept is the lack of access to the plantations. Women no longer have other means, they don’t have other opportunities to live and survive, other than accessing the plantations. To do so, they are forced to negotiate their way in, and during these negotiations they even have to offer their bodies, they have to engage in prostitution to be able to access the land and collect mushrooms and forest products. Sexual violence is so pervasive in some families that women have as many as eight children.

They receive several men coming back from the plantation, and also at their homes. If their daughters go to the plantations, they will have the same kind of relations with men, simply because they want to have access to the plantation to be able to survive. This is extreme violence, which often results in divorce, because people cannot continue to live within a bad family environment.

Similarly, women also lose their dignity. They become thieves. They steal, their children steal, and even their grandchildren are stealing. This is not dignified, they are losing hope. When we visit their homes, they don’t know what to do. They cannot find a way out, and this is yet another form of violence against them. These are unimaginable forms of violence. They are subjected to violence because they have to put food on the table. That is their role. They have to send their children to school. They are even losing their own culture. Plantations were established on highly-regarded sacred ground, and these areas were part of these women. It has all been destroyed with the plantations.

There is also so much physical abuse. They are threatened with jail simply because they carry palm kernels in their bags. These are kernels they need for consumption, they are a staple in their diet. In these areas, women cannot have palm kernels at home. If they do, then that’s because they have stolen them, and they will likely be found guilty in court. When the police arrest a woman, others are forced to negotiate with the officers. And the entire family is forced to mobilize, whether in the country or abroad.

The family will come to the rescue or send money to bribe the cops. These women are not supported by local leaders or administrations, because administrations are also subjected to these companies. Women, therefore, are left to fend for themselves. This is what happens in Cameroon, Gabon, Ivory Coast, all these countries that are involved with the oil palm and sugarcane agro-industries. Women are all doomed to the same fate, but they don’t give up.

We started to organize these women, to tell them that they need to stand up and defend themselves. They will not go on like this. Today, through media, they are able to denounce, to act, to present their complaints, to build networks that are so important. Since I have been here, this webinar has talked about this network that must start at the city level, and we are building a strong network at a local level, one that is able to bring together a region and even achieve the continental level. We continue to take this opportunity at this meeting today, and we believe one day we will have this network, which will be built at a global level and will be able to take women’s complaints to other levels, so that they can be freed from all this abuse and all this violence.

Women are presenting complaints, organizing partnerships and alliances with each other, and this is what will make us overcome this situation. I take this opportunity to thank the Informal Alliance Against Industrial Oil Palm Plantations. Little by little, we will be able to build this pyramid so that women’s problems are taken into consideration. They must be brave and firm to end all these frustrations and all this violence.

Marié Crescence Ngobo is a member of the Informal Alliance Against Industrial Oil Palm Plantations. She coordinates the Sustainable Development Actors Network (Réseau des Acteurs du Développement Durable—RADD) in Cameroon. This article is a transcript of her speech at the “Anti-systemic Struggles To Live Free of Violence” seminar held by Capire in collaboration with the World March of Women, La Via Campesina, and the World Rainforest Movement, on November 18th, 2021.