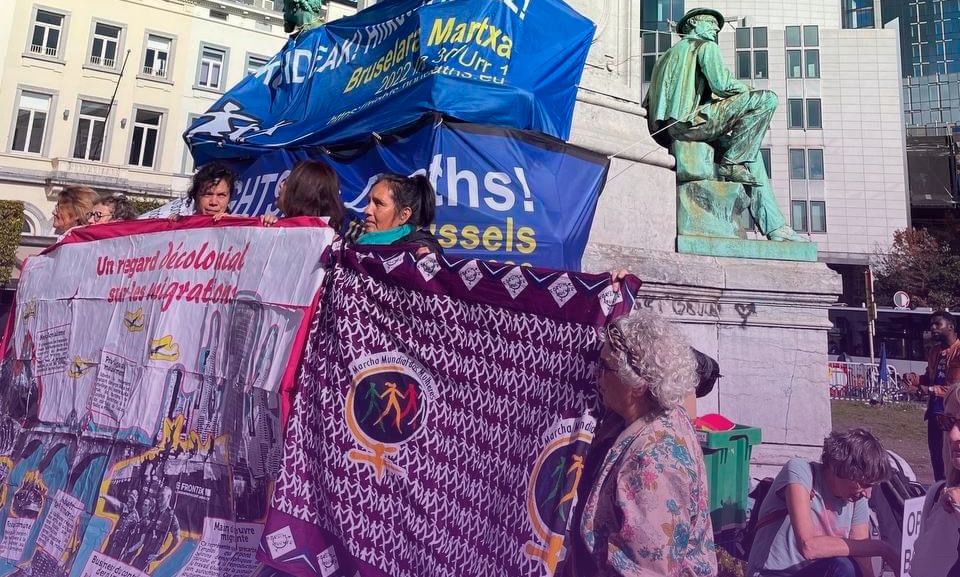 By Luciana Alfaro and Marianna Fernandes

Europe has been shielding borders and entering into agreements with transit countries to prevent migrants, especially from Africa, from getting to the region. On European borders, human rights and all international agreements are violated when it comes to migrants of color. One example is the massacre that killed more than 37 people in Melilla, an autonomous city of Spain in north Africa, in July 24th—the government of Spain has not taken any responsibility for the case yet.

It is about so much more than not acknowledging especially victims of gender-based violence, women, children, and LGBTIQA+ people. The reasons why they apply for protection and asylum are disregarded in Europe, despite the provisions of the Istanbul Convention, which recognizes violence against women as a form of persecution and therefore women have the right to international protection against it.

The European Union (EU) and its member countries increased their 2021-2027 security and defense budgets by 123 percent over the previous period—from 19.7 billion euros to 43.9 billion. Meanwhile, the energy crisis continues to aggravate, as does the precariousness of the lives of those the system makes more vulnerable, including the women who sustain their local economies, migrant workers whose situation is irregular, the so-called “undocumented people,” and older women.

As feminists who live in this region, it is up to us to also denounce the corporate power of European capital’s transnational firms, which operate with impunity in the territories of the global South, such as those who operate in extractivism, agribusiness, and the clothing industry.

We denounce the brutal spoliation that has been underway in the global South in the name of false solutions offered by the market for climate problems created by the capitalist system and its war against people’s and the planet’s lives.

We denounce the European Union’s Green Deal as a tool of violence, spoliation, and active creation of socio-environmental sacrifice zones.1 All that in the name of a distorted view of environmental sustainability, which translates into energy transitions co-opted by transnational companies, which rely on extractivism in the South and the peripheries of Europe, such as Portugal, Serbia, and others.

The World March of Women will always be in alliance with movements that struggle against all instruments of the heteropatriarchal, capitalist, racist, colonial system that brutalizes life. We affirm our acknowledgment and feminist solidarity with sisters who are being criminalized, threatened, and abused by states and transnational power for denouncing and resisting.

The World March of Women Europe believes in a grassroots feminism that fosters strategies of resistance based on feminist economy and the defense of common goods and universal public services. It also believes in actively denouncing the increase of military spending, the externalization of borders, the expansion of the European Border and Coast Guard Agency (Frontex), and the Green Deal. These are all tools of the heteropatriarchal, capitalist, racist, colonial system to crush the most precarious and vulnerable lives and increase big fortunes.

Luciana Alfaro and Marianna Fernandes are members of the International Committee of the World March of Women representing Europe.