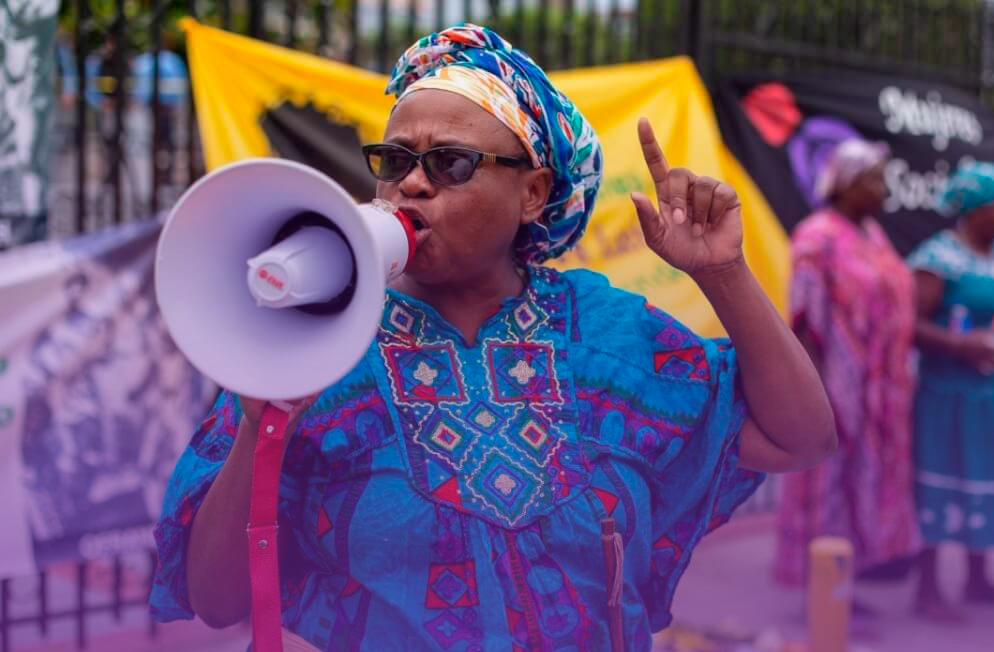 Miriam Miranda: “There Is a Genocide Against Us, the Peoples Who Defend Nature”

Capire spoke in September with Miriam Miranda, the general coordinator of the Black Fraternal Organization of Honduras (Organización Fraternal Negra Hondureña—OFRANEH). Miriam denounced the persecution experienced by the Afro-Indigenous Garifuna people and spoke about the political agenda and commitments of her organization, as well as her views on the connections between anti-racism, feminism, and the defense of nature and the common goods.

Miriam also talked about the political persecution she is currently suffering, a process spearheaded by the Public Prosecution Office of Honduras and denounced by organizations from Honduras and from across the continent. You can listen to the interview in Spanish or read it translated below:

Can you start by talking about your background and the story of the Garifuna people?

I am Afro-Indigenous. We are the Garifuna people, that is, a people of mixed Indigenous Arawak and Black African ancestry. This mixture happened on the island of Saint Vincent in the 16th century. Later, after a bloody war waged against our ancestors, we arrived in Honduras on April 12th, 1797, more specifically in the Punta Gorda community, on Roatán, one of the Bay Islands. Very few people know about this story, because the Bay Islands are only seen as a tourist destination. We are a matrilineal people, where women play a fundamental role. We are located off the Atlantic coast of Honduras, but Garifunas are also found in Belize, Guatemala, Nicaragua, and now there is a big Garifuna population in the United States, which is in fact the biggest population after Honduras. This is the result of all the pressure we are suffering along the coast and in a country that has become a narco-dictatorship in the past 12 years, where there is a large battle for the territories of the Garifuna people. So people choose to leave. We believe there is a policy aiming to clear out the territories so that they can be handed over to corporations, and especially to be hoarded by the country’s current powerful groups.

Can you tell us about how OFRANEH was organized and what fronts you are working on these days?

The Garifuna people organized with English-speaking Black people in the 1970s, in the context of the implementation of banana production in Honduras, to challenge racism and discrimination. The racist practices of the North became very sharp in banana plantations. In the early 1980s, we were able to organize a Garifuna meeting. That organization continued to evolve and eventually became what OFRANEH is today: a community organization that works with different communities and groups and is now the political representation of the Garifuna people in defending their collective rights and their rights to their ancestral territories.

Can you talk about the persecution you are suffering right now? And what are the motivations behind the investigation that was launched into you by the Public Prosecution Office?

There is a history behind that. In the past five years, Garifuna people have been murdered at an unprecedented rate. We have endured so much in these past 12 years of narco-dictatorship, because the Garifuna people did not remain in silence. The enforced disappearances, like the case of the president of the community association [of Triunfo de la Cruz], who was taken from his home on July 28th, 2020, don’t just affect the families that are closer to the young people that disappear.

After the enforced disappearance of these young men, we created the Garifuna Committee for the Search and Investigation of the Disappeared from Triunfo de La Cruz—SUNLA, a Garifuna word that means “enough”. The aim is to demand justice and investigation, but also stop the persecution, criminalization, and, above all, the violence perpetrated against Garifuna communities.

Last year, a year after our boys were abducted and disappeared, we went to the Public Prosecution Office to file a petition that required the compliance with sentences of the Inter-American Court of Human Rights and the end of criminalization. A year later, we went back to the Prosecution Office and requested a hearing with the Prosecutor, but they did not say a word. This year, instead of complying with what they are supposed to, they started to report us.

I believe this work by the Public Prosecution Office is also a sign of the weakness of the Xiomara Castro administration. The fact that they can use this kind of power to criminalize us right when the Xiomara Castro administration is building people power demonstrates what we have been talking about: it is not enough to hold the presidential office when there is an institutional crisis that renders defenders vulnerable and impacts them. We have been targeted by institutions so that they can attack other social organizations.

Honduras has become a political laboratory with the 2009 coup. But two other coups took place and went unnoticed: the coup by the National Congress against the Supreme Court of Justice on December 12th, 2012 (the “12/12/12 coup”), and the 2017 electoral coup. Honduras has experienced a number of attacks that have destroyed its institutions. Therefore, it is no coincidence that they have launched a criminal process against me.

In 2021, you said in an interview that “there is a genocide plan against the Garifuna people.” Why is genocide one of the tools of the powerful, not only in Honduras, but around the world?

There are several crises that we are facing as humanity, at a planetary scale. The most important one is the environmental crisis. The biggest problem for us, as peoples, is that the few resources left are in Indigenous areas, Black areas, the areas of our peoples. We are facing companies and states that respond to the interests of private firms and international corporations. This is their intention, to destroy our peoples. This way, they can take the few resources that are still left in our territories.

They have to destroy the peoples because there is resistance. For more than five centuries we have lived in these territories using only what is necessary, not to survive, but to live. I have been invited to speak to college students and we talked about how poverty is measured. They say Indigenous peoples are poor. Why, if they live by using only the necessary to live? They are considered poor because there is a different conception of poverty and development. Today, we are facing a development model that destroys nature and all living beings on the planet.

That is what happened with a huge hotel built in Bahia de Tela: they destroyed an entire hugely biodiverse area to build an 18-hole golf course that requires millions of liters of water to keep it green. They destroyed nesting sites where turtles laid their eggs and paved them with asphalt. To me, that’s ecocide. They have launched a terrible public campaign against OFRANEH claiming that we are anti-development. And I wonder: what development?

I see this as a suicidal process, even if it is against us, even if they push us toward suicide as human beings—because planet Earth will regenerate, this is what we see every day. This is why I say that, at a planetary scale, there is a genocide process and policy against the peoples who defend nature, natural resources, and life.

When it comes to defending life, what is the role of Black and Indigenous women?

Over the course of the past 20 or 30 years, we, as women, have been addressing the defense of our territories. We are not just defending our body-territory, we are also defending the territory in general. I remember a discussion panel I took part in about “pure” feminism, that is, that feminist current that defended the body-body, but was not interested in defending natural resources and other bodies. I celebrate that, in recent years, the matter of defending territories has been incorporated by several feminist movements.

We, as women, are the primary ones when it comes to the needs of the household and resources. How many women have to walk so many kilometers to fetch just a little bit of water? How many women have to defend their seeds? We have been around for centuries, but in recent decades women have emerged to secure the continuity of humanity, to defend the existence of a common home for our children, so that these new generations can really enjoy what is out there and have a fulfilling life, eating well, breathing fresh air, and enjoying nature.

We can no longer allow that the building of our right is placed in other people’s hands. We are living in a time of consolidation of fascism. The concentration of power of those who now control the economic and political system is so large that it makes people leave their home countries to suffer in other countries, under extreme conditions of human rights violations. What will we do regarding the migration issue if we don’t do anything to make sure people stay in their home countries? We have the right to migrate, but we also have the right to remain in our country and build a different country. What are we building, little by little, from social movements, that allows us to disrupt that and show that we can do this, that we can change things?

With OFRANEH, we are developing a process of autonomy and food sovereignty in Vallecito, a territory that we are managing, little by little, to set free from the hands of drug trafficking. We are growing coconuts to replace and challenge palm oil plantations, not only to bring back the diet of the Garifuna people, but also to help in terms of health. We have seven ancestral health care centers operating and offering primary health care, which are committed to restoring the Garifuna people’s historical memory regarding medicinal plant use. We have to be strong to face diseases and epidemics: providing care in terms of food, the way we live, mental health, water, and the air we breathe. We have to be well, and that means to build as well as to deconstruct things.

Women’s movements can do more from our spaces. Even when we are in urban areas, we must build free and autonomous territories, where can be more human. Violence is undermining society, destroying the social fabric and communities. Fighting violence is fundamental, and we do that by generating love. The communities, neighborhoods, and the cities have to find ways to work against violence and against dehumanization.